Substantial variations in scale of hit across sectors, regions and age groups

Jobs data for the second quarter of 2020 give a strong sense of the scale and breadth of the initial hit to the Irish economy as activity was ’frozen’ to limit the health impact from the coronavirus. Unfortunately, statistical issues in relation to the manner in which employment and unemployment are formally measured together with marked differences in impacts across sectors and age groups mean there isn’t a single summary number that fully describes the Irish jobs market at present.

On the normal statistical conventions used to measure employment, numbers at work in Ireland were 3.4% (or 78k lower) in the second quarter of 2020 than a year earlier. As the diagram below indicates, that puts Ireland broadly in line with the Euro area average (-2.9%), poorer than the UK but markedly better  than the US. However, the change in altitude from the previously dynamic pace of job creation in the Irish jobs market mean that even on this definition, the recent turnaround in job market conditions appears more severe than in many other countries. 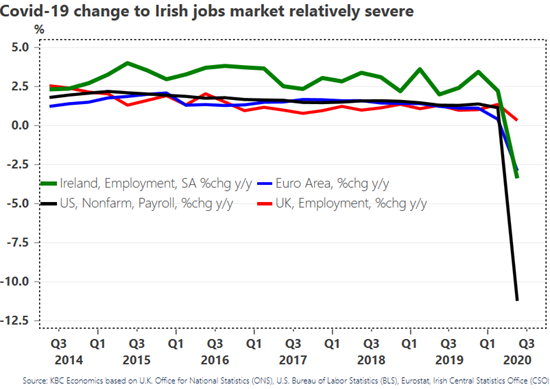 On a broader calculation provided by the Central Statistics Office (CSO), which provides some sense of an upper bound to Irish jobs market dislocation, what we might define as numbers working ‘normally’ were some 516k or 22.5% lower in Q2 2020 than a year earlier. So, understandably, there is a very wide range  between lower bound (78k) and upper bound estimates of the immediate hit to the Irish jobs market from the Coronavirus.

More importantly, there is no ready way of telling at this point how large and lasting the impact of the pandemic may be on the Irish jobs market. However, the scale of impacts revealed in today’s numbers urges the importance of substantial and sustained policy support to minimise the permanent scarring on the Irish labour market. The details of today’s data also suggest significant variations in impact across the economy that suggests policy supports will need to increasingly become ‘micro’ rather than ‘macro’ focussed.

While the ‘formal’ employment measure shows a large 78k drop in employment in Q2 2020 from a year earlier, sectoral details also suggest numbers at work were lower in just 7 of the of the 14 main economic sectors. The sharpest drop was in accommodation and food services which shed 54k jobs through the past year. Administrative and Support Services lost 19k while Construction employment fell 18k, Transport and Storage declined 12k and Other activities dropped 23k.

In contrast, 6 out of 14 sectors showed higher numbers at work than a year ago. The strongest gains were in Finance, Insurance and Real estate (+19k) with notable gains also in ICT(+17k), Education (+15k) , Public administration (+7k) and Industry (+7k).

The exceptional nature of current circumstances makes it more problematic to assess whether seasonal adjustment factors properly capture quarter on quarter changes but here too 5 out of 14 quarters saw increases in employment between the first and second quarters of 2020 whereas 9 saw declines. While the same reservation applies to the overall quarter-on quarter change in numbers at work, which saw a 6.3% drop in this metric is indicative of a severe change in Irish job market conditions of late.

The same sense of substantial variation in impacts is suggested by the difference between the twelve month decline in full-time employment of 1.1% and the 12.5% decline in part-time employment. Similarly, numbers at work aged 45 and above were 2% higher than a year earlier whereas there was a drop of 7% in employment among those aged less than 45.   There were also notable regional variations ranging from a sharp 11.5% drop in numbers at work in the Border region through a slightly above average 4.7% drop in Dublin to marginal year on year increases in employment in South-West and Midlands.

As noted above, the manner in which employment and unemployment is measured internationally means that headline figures are likely to materially understate the scale of job market dislocation caused by the pandemic. The international practice with measures of employment is to include as employed those workers who ’are temporarily away from a job they are expected to return to’ implying the inclusion of significant numbers of furloughed workers in the official measure of employment.

Measurement difficulties are even more pronounced in relation to unemployment. As official measures require that for individuals to be classified as unemployed, they are available for and actively seeking work, the circumstances around the pandemic mean that official measures translate into large numbers becoming economically inactive and dropping out of the labour force. As a result, they don’t feature in official measures of unemployment. On that basis, the official seasonally adjusted unemployment rate remained unchanged from Q1 at 4.9% in Q2 2020.

However, most domestic analysis and commentary focusses on a supplementary CSO figure that also includes those receiving the Pandemic Unemployment Payment which according to today’s data  stood at 23.1% at the end of Q2 and according to previous CSO monthly data slipped to 16.7% in July. Our current judgement is that this number may not slip into single digit territory before the end of the year.