Jobs Data Point Towards Solid Rather Than Surging Irish Economy

Jobs data for the first quarter of 2014 are consistent

Pause in job gains in Q1 but trend in Irish employment remains positive.

• Net emigration may have peaked as inflows increase and outflows stabilise.

We think jobs data for the first quarter of 2014 are consistent with an improving Irish economy but not one that is seeing any dramatic acceleration in the pace of growth at present. Our best guess is that job growth in 2014 will be strong at close to 2% but slower than the surprisingly rapid increase seen through 2013. Today’s data also hint at exceptional demographic influences on the Irish jobs market in the shape of significant two-way migration flows and a related and unusual age related split in employment trends.

Numbers at work in the Irish economy were effectively unchanged in the first three months of 2014 compared to the final quarter of 2013. The rise of 1.7 k or 0.1% is not statistically significant. That said, the underlying trend in the Irish jobs market still remains solidly positive with numbers at work in early 2014 up by 42.7k or 2.3% compared to the first quarter of 2013. As diagram 1 below indicates, both employment and unemployment numbers are slowly but surely moving in the right direction after the traumatic events of recent years. 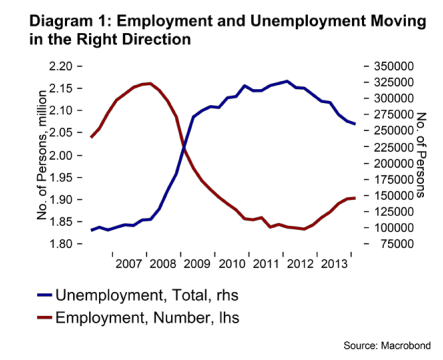 The somewhat softer trend in hiring in early 2014 should probably be seen as something of a pause or correction following exceptionally fast jobs growth through the past year when the average quarterly gain was 0.8% or an annualised 3.2%. Given the fragile nature of global growth and the significant constraints on domestic spending power, it would be surprising if firms were to sustain an aggressive expansion in employment of the sort seen in the past year. However, survey data point to the persistence of solid increases in Jobs Data Point Towards Solid Rather Than Surging Irish Economy26 May 2014 3 employment through the remainder of 2014.

At this point, we think average jobs growth could be close to or slightly less than 2% in 2014. This would entail quarterly job gains of around 10k for the remainder of the year- a significant step-up from the first quarter outturn but broadly in line with the average of the past four quarters.

As has been the case in the three previous quarters, today’s data suggest some shift from part time to full time employment, with the former down 1% and the latter up 0.4% in the past three months. This may be a response to a continuing if gradual upturn in activity that is prompting an increase in hours worked. This also hints at a cautious approach to rebuilding payrolls on the part of employers. Again, this is not surprising in view of ongoing uncertainty about the strength and durability of the current recovery as well as the experience of a dramatic reduction in headcount through the recent downturn.

At the sectoral level, most quarterly changes were marginal in early 2014 and don’t point to any dramatic change in economic conditions of late. However, there was a clear drop in numbers employed in agriculture—down from 116.4k in late 2013 to 112.9k—but this still leaves numbers in this sector up a surprising 23k from early 2013. The particular buoyancy of agricultural employment through the past year or so likely reflects a sampling issue. So, a weaker trend in this area through the coming year would not be surprising. Importantly, as the survey is compiled ‘top-down’, these sorts of issues only affect the sectoral breakdown and don’t influence the aggregate outcome.

The improving trend in the Irish jobs market together with ongoing net emigration has translated into a continuing decline in unemployment. The jobless rate in early 2014 at 12.0% was significantly down on the 13.7% rate of early 2013.We see unemployment averaging 11.5% in 2014 as an increase in the labour force and structural issues act to offset a healthy pace of job gains. Reflecting the scale of the deterioration in the Irish jobs market through 2008 to 2012, it is not surprising that the bulk of those currently jobless have been out of work for more than twelve months. However, through the past year, the long-term unemployment rate has fallen from 8.4 % to 7.3% of the workforce.

Today’s data show a marginal increase in the population aged 15 and over in the past year. This represents the best outturn since the first quarter of 2010.This hints that net emigration may have peaked. However, in turn, this seems to reflect a pick-up in inward migration by non-Irish nationals rather than any marked easing in outward migration by Irish nationals. This may go some way to reconciling Jobs Data Point Towards Solid Rather Than Surging Irish Economy26 May 2014 4 anecdotal reports of ongoing emigration with indications of skill shortages in certain areas.

The coincidence of significant two-way migration flows would also be consistent with a very unusual if ongoing age split in the Irish jobs market. As has been the case in recent quarters, job gains were concentrated among over 35s. In the first three months of 2014, numbers at work aged 35 and older increased by 4.7%  or 56k while numbers at work aged 34 and younger declined by 2.1% or 14k. This is not due to younger age groups returning to education as the number of students fell by 5k in the past year. This owes a great deal to a demographic effect resulting from a sharp drop in the number of births from 74k in 1980 to 48k in 1994 with strong net emigration in recent years also a key influence.