The jobs market data has begun to stabilise

4th quarter data show a marginal rise in numbers at work and an ongoing decline in unemployment.

• Scale of improvement in the Irish job market is modest and likely to remain so but data suggest healthier economic activity is beginning to support jobs.

• Unemployment rate now at 14.1%, the lowest level since Autumn 2010 and going in a healthier direction than in many other Euro area economies.

Irish jobs data for the final three months of 2012 show a welcome if marginal increase in numbers at work and a significant decline in unemployment. Separately, live register data for February 2013 show Ireland’s unemployment rate at 14.1%, with numbers on the live register falling for the eighth month in a row.

The jobs market data for the final quarter of 2012 suggest the Irish labour market has begun to stabilise and numbers at work are up marginally both compared to the previous quarter and a year ago, the first time that this happened since the beginning of 2008. There has also been a notable decline in numbers unemployed and in the jobless rate.

As diagram 1 below shows, the increase in Irish employment is marginal—just 0.1% on the year and 0.4% on the quarter. So, it is probably better to regard these data as signalling a tentative balance in the labour market, a further stage in a gradual process of stabilisation following exceptionally sharp job losses through 2009 and 2010. Nonetheless, today’s data suggest modest gains in economic activity for the past year or two have started to translate into improving Irish job market conditions. As the trajectory of Irish economic growth in the coming year is likely to be relatively modest, job gains are unlikely to markedly exceed job losses anytime soon. However, the prospect of even incremental increases in numbers at work through 2013 would mean Irish economic performance is now notably different to that of a wide range of Euro area economies. 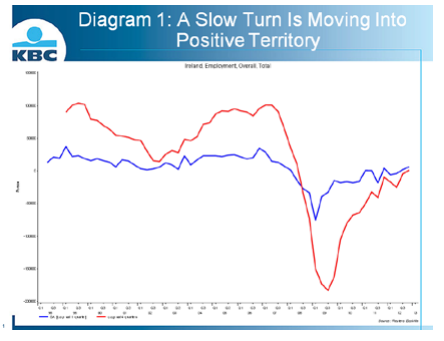 As diagram 2 indicates, the drop in the Irish unemployment rate through 2012 suggest the recent trend in the Irish jobs market has more in common with ‘Anglo Saxon’ economies of the US and UK even if the level of unemployment here bears closer comparison to conditions in the Euro area. At the margin, a positive impetus to Irish economic growth from the US and UK is helping. So too would traditionally strong links between the respective labour markets. Arguably, the greatest near term significance of the drop in Irish unemployment is that it differentiates the current trajectory of the Irish economy from that of a range of ‘troubled’ Euro area economies where unemployment has been rising sharply of late. 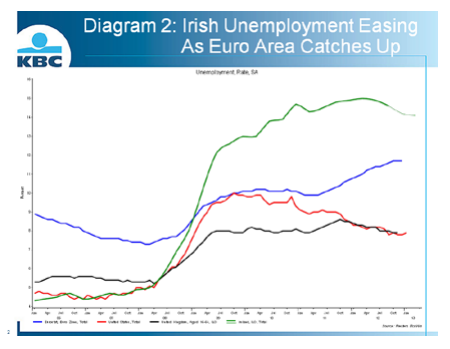 A marginal improvement in jobs market conditions, a continuing drop in the participation rate as workers either retired or moved into further education as well as ongoing emigration all combined to drive the decline in Ireland’s unemployment rate down through 2012 from 15.0% in the first quarter to 14.2% in the final three months of the year (and to 14.1% in early 2013 on the basis of today’s live register data).The fall in numbers unemployed at 19.2K in the past year is broadly similar to the size of the reduction in the labour force but it would be wrong to suggest that this was the full story of the Irish labour market in the past year. Between the final quarter of 2011 and the final quarter of 2012, numbers employed in the Public Sector dropped by 9K, a significant number of whom would have taken early retirement. This implies numbers at work in the private sector increased by about 10K, of which the bulk of the increase related to self employment. Another notable aspect is that full time employment continued to decline but part time employment increased. Importantly, the rise in part time employment was concentrated among those who said they were not underemployed. So, it appears to reflect a ‘voluntary’ part time status. Another key aspect of the Irish jobs market at present is the extent to which conditions vary across different sectors. Of the 14 principal economic sectors separately identified by the CSO, 6 showed a rise in numbers at work while 8 saw a decline in the past year. So, the Irish jobs market shows substantial divergences across sectors and a significant measure of jobs turnover in the past year.

While the drop in Irish unemployment in 2012 owes a significant amount to outward migration, today’s jobs data for the fourth quarter hint that net outward migration could have peaked in early 2012. The population of persons aged 15 years or more posted a fractional year on year increase in the fourth quarter of last year, the healthiest performance since the beginning of 2010. Diagram 3 compares annual net migration data with these quarterly population data. It suggests that changes in net migration are closely correlated with fluctuations in the population aged over 15 in Ireland. The slight improvement in recent quarterly data holds out the possibility that net migration may have peaked in the early quarters of last year and may have eased marginally in the interim even if it is still likely to be running at relatively high levels. In turn, this suggests the decline in Irish unemployment through the course of last year cannot be explained solely by emigration. Instead, it appears to owe something to structural changes in participation rates as well as a slightly better jobs climate. 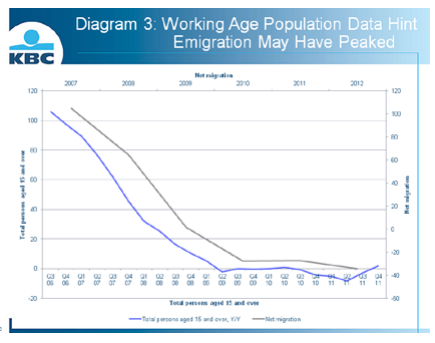 Detailed seasonally adjusted sectoral data confirm the picture of a gradual stabilisation in the Irish jobs market through the course of last year. Numbers at work rose marginally in both the third and fourth quarters and, significantly, numbers at work increased in all but three of fourteen sectors in the final three months of last year. Of the three sectors where employment shrank, two were predominantly areas of public sector activity—public administration and education, while the third was a catch-all of miscellaneous economic sectors. These details may hint at an element of rebalancing in the Irish economy whereby numbers at work in the Public Sector are seeing a trend decline while job gains in the private sector now match or slightly exceed job losses.

It should be emphasised the emerging turn in the Irish jobs market is tentative, that conditions overall are fragile and numbers out of work remain extremely high. With global economic growth constrained and domestic demand still curbed by ongoing fiscal austerity, there seems little prospect of any dramatic improvement in the Irish jobs market in the near term. However, stable or marginally increasing employment and falling unemployment would mark significant progress for the Irish economy. It would also contrast sharply with the ongoing deterioration evident in jobs markets across a range of Euro area economies.