Jobs growth running close to 4%and consistent with GDP growth of 5% in 2015.

Employment gains broadly based across sectors and regions of Irish economy.

Irish job growth data for the second quarter of 2015 are extremely impressive and hint at an economy that is building strong positive momentum and seeing a notable broadening of the recovery.

Population data published separately today emphasise Ireland’s exceptional demographic profile. The persistence of the strongest birth rate and the lowest death rate in the European Union, coupled with some easing in net migration prompted a healthy rise in Ireland’s population in the past year.

With the underlying pace of job creation now running close to 4% and about a percentage point higher than a year ago, the employment data point suggest economic activity is now on a strong trajectory that seems entirely consistent with our current forecast of 5% GDP growth in 2015. Signs in these data of a broadening of the basis of jobs growth of late also hint at more balanced growth in activity as well as some measure of domestic capacity to limit the impact of recent uncertainty in the international economy.

Numbers at work in the Irish economy increased by 19k or 1% in the second quarter. This was the largest quarterly increase in two years and the fastest rise in full-time employment since the first quarter of 2007. As diagram 1 below suggests, a comparison of the year on year increase in the headline jobs number (+3%) with both the annualised quarterly increase (+4.0%) and the year on year rise in full-time employment (+3.9%) suggests the recovery in the jobs market is picking up pace of late as the upturn becomes longer established.

Employment has increased quarter-on-quarter in each of the past 11 quarters. As a result, employment is now 57,100 higher than a year ago (+3.0%). Numbers at work are some 130k above the low-point seen in the third quarter of 2012 although they remain some 197k below the early 2008 peak. 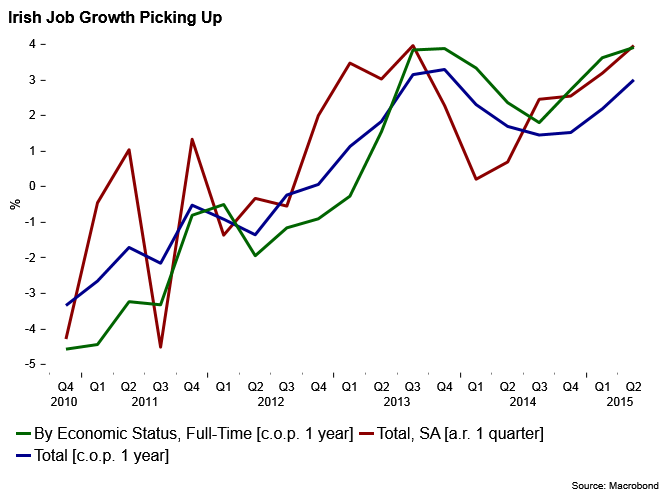 Employment rose in 11 of the 14 NACE sectors in the past three months and, apart from professional, scientific and technical activities which saw a sharp decline in the previous quarter largely corrected, job gains were broadly distributed across sectors. Similarly, all regions of the country saw annual increases in employment (a seasonally adjusted breakdown of regional data is not available). So, the improvement in the Irish jobs market appears to be spreading as well as strengthening.

The sense of a strengthening recovery in these second quarter data is also suggested by positive growth in the labour force on both a quarterly and annual basis in contrast to a declining trend through most of the past seven years.  Notwithstanding a growing labour force, unemployment has continued to fall- reaching 9.6% of the labour force, its lowest level since end-2008. The buoyancy of the labour market also means the drop in the long term unemployment rate to 9.8% from 11.9% a year ago has been somewhat larger than the drop in short term unemployment.

Separately today, the Central Statistics Office released population and migration estimates for 2015. These show the population increased by 25.8k or 0.6%. This is the fastest increase since 2009 and compares to an average increase of 0.2% in the EU.

Ireland’s net migration picture is also something of an outlier. Outward migration from Ireland held broadly steady in the past year at 80.9k but inward migration picked up significantly to 69.3k from 60.9k. While the improvement in Irish economic conditions may be attracting more inward migration and curbing emigration somewhat, the details of this release suggest diverse and complex influences are driving substantial two-way migration flows.

First of all, the data suggest a relatively high incidence of well-educated migrants; some 53% of emigrants from Ireland and 56% of migrants to Ireland had third level qualifications, emphasising the mobility of these travellers. Moreover, 48% of emigrants leaving Ireland in 2015 had jobs before leaving while less than 14% were unemployed. Data for recent years are also notable for a marked pick-up in two-way flows to countries beyond the EU, US Canada and Australia. So, the scale and structure of Ireland’s migration flows are unlikely to be explained satisfactorily by changes in domestic economic conditions. At a more basic level, the net position is likely to remain the balance of large two-way flows that follow from the small size and open nature of the Irish economy.