Irish house price inflation surged to 10.9% in August from 8.5% in July, and marks the fastest year on year increase since June 2018 (+12%). Some sense of the current momentum is suggested by fact that the month-on-month change in house prices in August was the fastest since July 2017 (+2.7%).

An even starker illustration of the current intensity of price pressures is seen in the diagram below that compares the conventional twelve month rate of increase with the three month annualised increase. Over the June to August period, the three month annualised increase was 24%, the fastest pace of increase in seven years-since July-September 2014. This surge was slightly slower for Dublin +(20.5%) than in the rest of Ireland ((+26.1%) but suggests very broadly based price pressures at present. 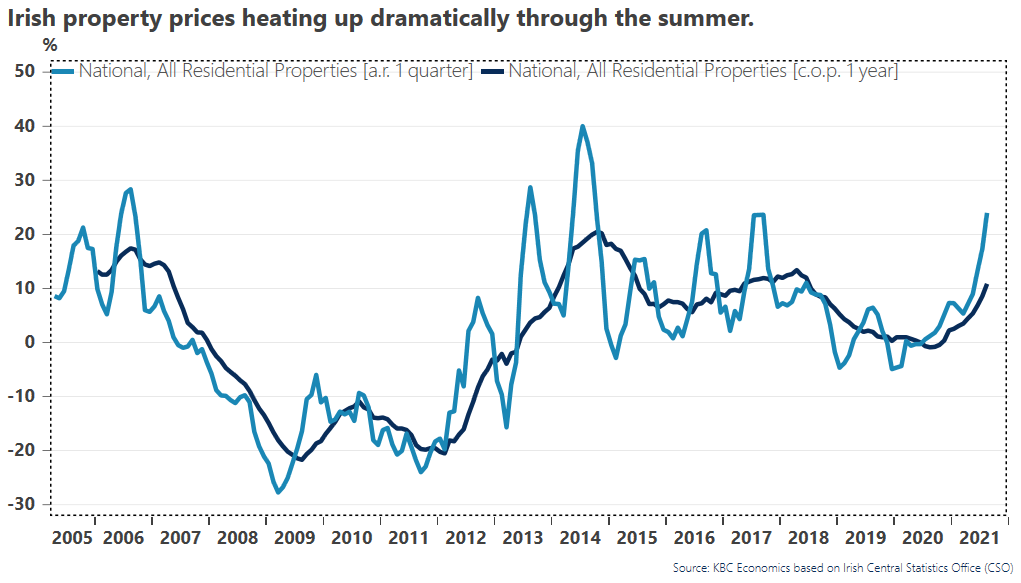 Today's August property price data show the volume of market sales to household purchasers up 59.6% on the pandemic affected level of August 2020 and only 4.6% below the level of August 2019. So, property sales are currently near to their pre-pandemic levels, implying that while central to the longstanding problems of the Irish housing market, exceptional weakness in supply is not the key issue explaining the acceleration in property price inflation of late.

Instead, we take the view that sharply increasing demand has played a central role. This pick-up likely reflects concerns that supply will not improve in a meaningful time-frame. An additional element is an uptick in interest in properties outside the main cities spurred by the prospect of increased working from home.  Again, in circumstances where there is little or no new supply in many of these areas, even modest increases in demand are sufficient to produce out-sized increases in prices of late.

Irish consumer price inflation reached 3.7% in September, the highest rate since October 2008 (+4.0%). The likelihood is that inflation will climb above 4% in coming months and, while it should ease through 2022, the pace and spread of improvement may be uneven. In turn, this may heighten already broadly based concerns about living costs.

As has been the case in Ireland and elsewhere for most of the past year, the main driver of a sharply rising trend in consumer prices has been a surge in energy costs that are up 6.7% between August and September, leaving them 18.4% higher than in September 2020.

Importantly, while the surge in energy costs has been steadily building in the inflation figures, the full impact of higher fuel costs on household spending power has yet to be seen as only now are consumers starting to turn on heating and/or face notably increased motor fuel costs as commuting times lengthen on a broadening return to the office.

Beyond energy costs, modest upward pressure has also been seen in a number of other areas of late and September saw some notable month-on month increases; in clothing and footwear (+2.9%m/m which is above seasonal norms), furnishings (+2.5%) and electronic equipment (+1.6%).

These increases are likely to reflect global supply problems as well as some Brexit-related logistical difficulties and Sterling strength. Many of these factors may build further as Christmas approaches. We would add that the nature of these categories, that are dominated by global rather than domestic production, suggests price pressures are the result of supply problems rather than demand pressures.

We previously described the current uptrend in Irish inflation as ‘noisy and nasty’ and, as is the case in other countries, it poses some significant risks to a solid but still uneven recovery. However, we would emphasise an important distinction between current price pressures and what was an ‘ugly and embedded’ inflation problem in the early to mid-2000’s as illustrated in the diagram below which shows the trend in inflation relative to domestic demand pressures as indicated by the prevailing unemployment rate (inverted in the diagram) . 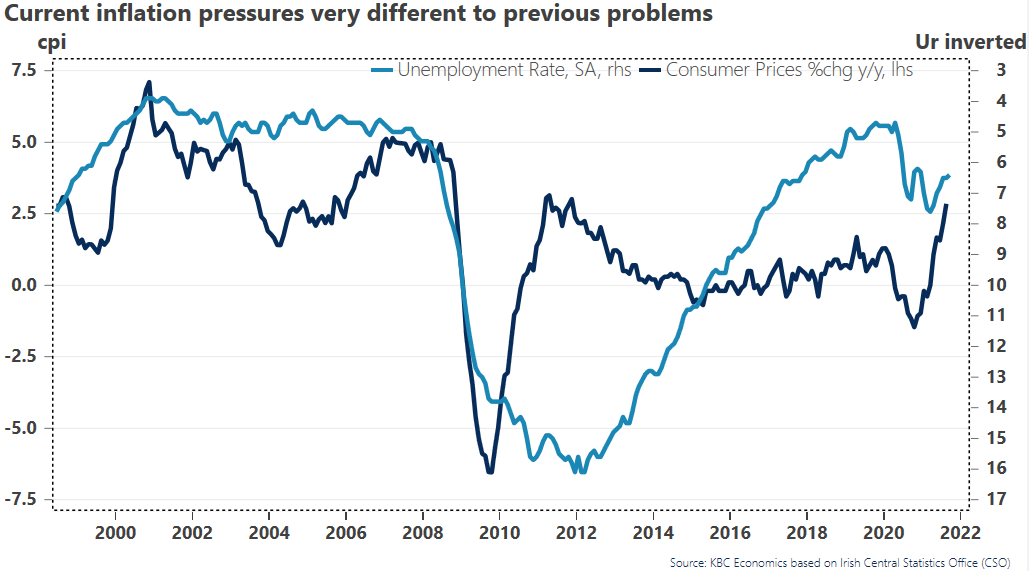 The drivers of Irish inflation at present are mainly global in nature and significantly reflect international supply shortfalls whereas the inflation of the early to mid-2000’s was driven by a decade of super-charged and broadly based growth that pushed unemployment to record lows, rapid credit growth, long-lasting fiscal largesse and entrenched expectations. Troublesome as the current episode is, the Irish economy is some distance from overheating and, the drain on spending power from the current inflation shock may lessen that threat further.