Softening in mortgage approvals suggests CBI measures  may be impacting amount rather than size of loans.

December property price data suggest a continuing easing in Irish property price inflation.  However, this is coming about as a result of important forces acting in opposing directions and as such, may be prone to choppy movements.

Irish residential property prices reflect continuing tensions in the housing market. These result from the healthy underlying demand that might be expected to follow from a strong Irish economy on one hand and the constraints imposed by supply problems and macro-prudential limits on the other. The outcome is an uneven moderation in the rate of house price inflation and a weaker trend in mortgage approvals of late.

Irish property prices were 6.6% higher in December 2015 than they were a year earlier, a marked easing from the 16.3% increase recorded between December 2013 and 2014. The contrast between a marked slowdown in Dublin price inflation (from 22.3% to 2.6% between the two periods) and an unchanged and relatively rapid pace of increase in the rest of Ireland (+10.2% for both periods) highlights the uneven nature of the change in market conditions. Moreover, as the diagrams below illustrate, a comparison with employment data suggests the respective outturns for Dublin and elsewhere do not seem to reflect underlying demand conditions. As a result, it is not clear that this relative re-pricing represents an entirely optimal outcome. 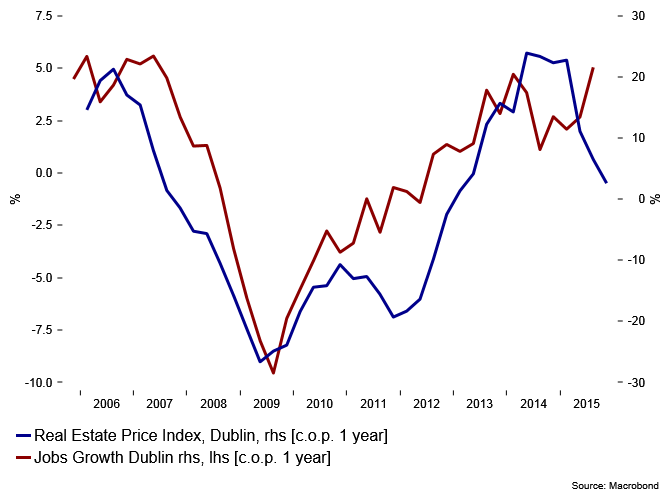 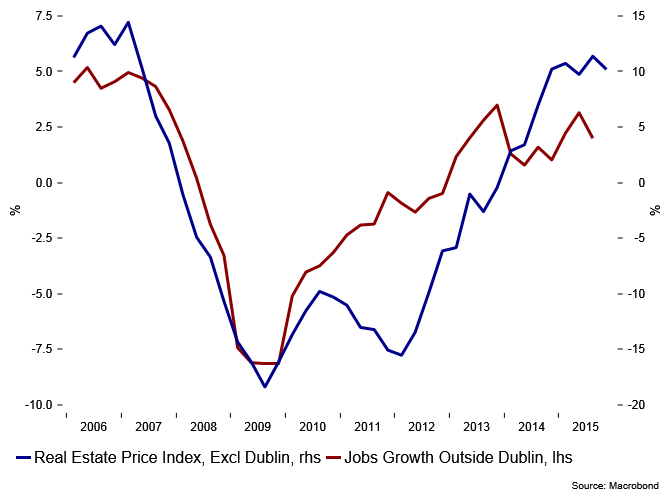 December house prices recorded a monthly rise of 0.5% that reversed a similarly sized fall in November, a pattern that emphasises both the choppy nature of the data themselves and the market conditions they measure. The monthly changes reflect notably stronger growth in prices outside Dublin and a significantly smaller fall in prices in the capital than seen in November. Our sense is that these data have a strong seasonal element. In previous years, the earlier months of the year saw successive monthly declines. Similar influences together with constraints on supply and funding  as well as some possible impact from uncertainty around the election might be expected to lead to a further softening in annual rates of inflation in early 2016.

Separately today, mortgage approvals data released by the BPFI show a marked decline in mortgage approvals in the three months ending in December 2015 from a year earlier. The number of mortgage approvals for house purchase fell by 20.3%.  The corresponding value figure declined by 18.3%, this suggests the average size of loan increased by 2.8%. Our sense is that the CSO property price data could move towards this rate of increase through the spring months.

Significantly, the increase in average loan size in the BPFI data was somewhat greater than it was a year earlier, when it was at  1.2% (which itself emphasised the limited role credit growth was having on price developments). This suggests that the CBI loan limits are having a notably greater impact on the number of loans rather than the size of those loans, implying they may be acting primarily as a rationing mechanism.