House prices rise 1.1% in February similar to increases through the past six months

Uncertainty and employment hit means near term risks to downside

Irish residential property increased by 1.1% y/y in February 2020, the same pace as in January (which was revised down from an initially reported increase of 1.8%). Irish  house price inflation has now remained in the region of 1% for six months having previously eased progressively from a three year peak of 13.3% in April 2018.

As a result, as the diagram below suggests, these data seem to confirm that before the coronavirus struck, Irish property price inflation had effectively bottomed out as affordability constraints and improving supply moved prices onto a trajectory consistent with a solidly improving Irish economy. 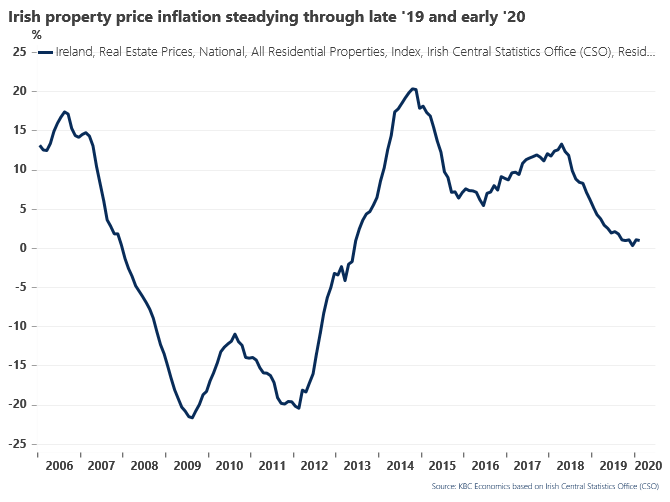 Like most other economic metrics in Ireland and elsewhere, property price data will need to be judged in terms of whether they relate to the period before Coronavirus, during Coronavirus or after Coronavirus (AC).  The significance of pre-crisis data such as the February house price numbers lies in the inference that modest and broadly stable property price inflation suggests the Irish residential sales market entered the crisis in broad balance even if that ‘equilibrium’ meant the housing requirements of large numbers weren’t adequately met.

European Central Bank estimates of Irish property price valuations emphasise critical differences between current circumstances and the financial crisis of a little over a decade ago. As the diagram below indicates, using various approaches,  the ECB now estimates that Irish property valuations were substantially overstretched in 20007 with their average estimate suggesting Irish property values were around 30% higher than might have been justified. However, the ECB suggests that, in the third quarter of 2019, Irish house prices may have been slightly below levels consistent with the performance of the Irish economy (the average estimate is an undervaluation of 7.3%). 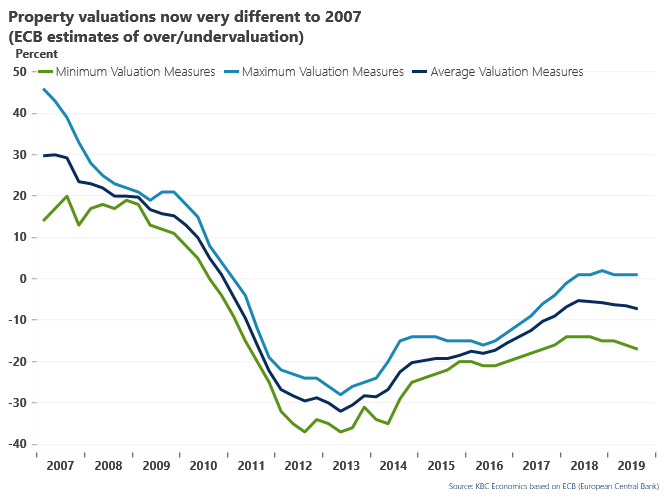 In the same vein, new construction is still seen as below levels necessary to meet the housing needs of Irish society. In the three years before the financial crisis 252k homes were built in the past three years it is just under 54k in spite of a population that is 436k higher. These considerations don’t mean the Irish property market doesn’t face major challenges at present but they emphasise that unlike 2008 challenges facing the Irish property market are a reflection of broader economic difficulties rather than imbalances in the sector itself.

In coming months, the effective shutdown of the Irish economy means housing market activity will be very limited and house price data will be based on very limited transactions. Hence, the information content of house price data could be somewhat compromised notwithstanding the best efforts of the Central Statistics Office. Uncertainty around incomes and a significant but hopefully short-lived hit to employment emphasise the prevalence of downside risks in the immediate future.

Beyond the next few months, the outlook for the property market like the broader Irish economy is unclear at this point but prospects will be significantly influenced by the underlying fundamentals and any policy actions taken to restore activity, incomes and employment to a healthier path.

In the context of significant unmet housing requirements before the Covid19 crisis, the labour intensive nature of activity, its broad geographic and skillset reach and a strong domestic multiplier for injections of demand in this area, it would seem that the property sector is a natural conduit for policy actions  to revitalise the Irish economy. 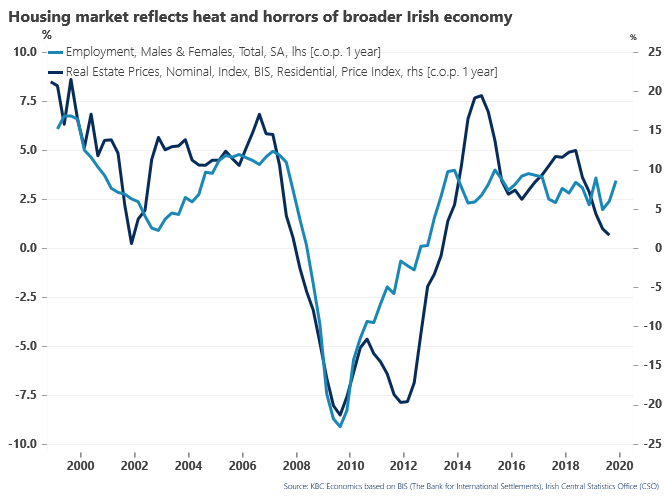