Property price inflation at 2%, little changed in past thee months

Prices and transactions outside the capital still showing solid gains

Irish property price inflation eased back to 2% in August having edged up to 2.3% in July from the 2% increase seen in June. These data hint  at a measure of stability in house price inflation in recent months following what the diagram below shows to be a lengthy marked easing since April 2018.

Residential property prices rose 0.3% between July and August, the sixth successive month-on-month increase. In the same vein, recent economic data show continued growth in employment coupled with a pick-up in wage growth while there has been some softening in borrowing costs. However, with economic uncertainty notably increased of late on foot of major Brexit related worries, the likelihood is that the Irish property market, like the broader economy, faces a bumpy period ahead. 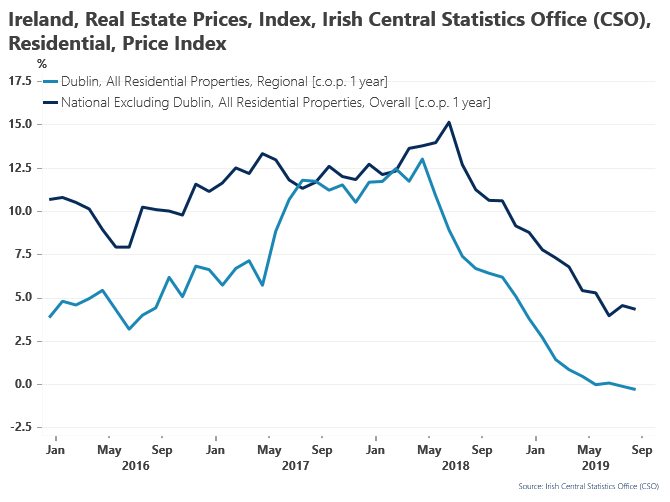 The August data show a second month of negative year on year price changes for Dublin. Within Dublin, the sharpest year on year declines are being seen in relation to Dun Laoghaire-Rathdown properties where the median price of properties bought by household buyers was some €554k or 14.2 times average earnings.  However, this largely reflects the €610k median price being paid by ‘movers’ (the median first time buyer price of €395k in Dun Laoghaire-Rathdown is 10.2 times average national earnings). At these sort levels, it might be expected that property prices would be particularly sensitive to the influence of affordability constraints and increased Brexit-related nervousness.

While we feel that demand side factors explain the intensity of the decline in property price inflation, particularly in Dublin, increased supply has also played some role. Importantly,  even though new completions are running well below levels consistent with natural demand, a progressive rise in new supply, both actual and expected, is curbing any tendency to repeat the panic buying of the previous boom. As a result, affordability and availability outside Dublin have translated into a steady albeit  modest growth in property transactions and continuing growth in prices outside the capital, as the diagram below illustrates, while buyer limits and Brexit have resulted in a softening in activity in Dublin. 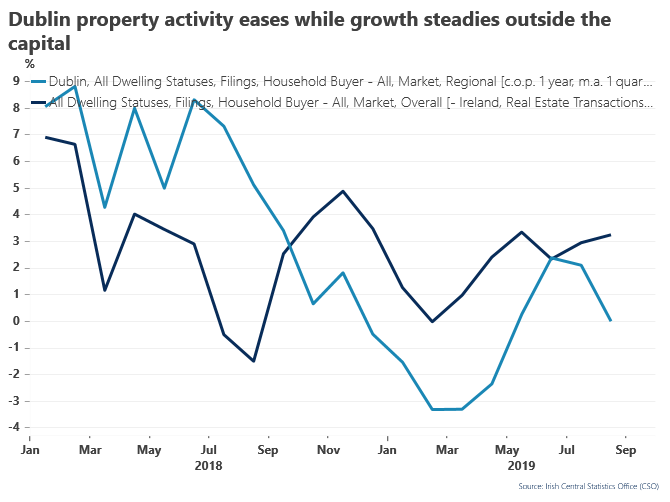