A slight easing in Irish house price inflation in May could mark the beginning of a move to a more sustainable pace of increase in property prices but the persistence of a significant shortfall in supply and a backlog of unmet demand mean this process could a lengthy one.

Irish house price inflation eased modestly to 12.4% in May from an upwardly revised 13.5% in April (previously estimated at +13%). A monthly increase of 0.6% is still indicative of significant upward momentum in house prices as is the 9.3% annualised increase over the past three months. However, both of these measures hint at a slightly softer pace of increase of late than that signalled by the twelve month increase.

The softer annual increase in May was driven by a notable slowdown in Dublin house price inflation which eased to 10.7% in May from 13.0% in April (the fastest increase since May 2015). The 0.5% monthly rise in property prices in the capital is healthy and the highest in the past three months but markedly less than 2.6% increase seen in May 2017 which was the largest monthly increase since mid-2014. As last year saw quite rapid monthly increases each month between May and September, a further trend easing in Dublin property price inflation would not be surprising in coming months. 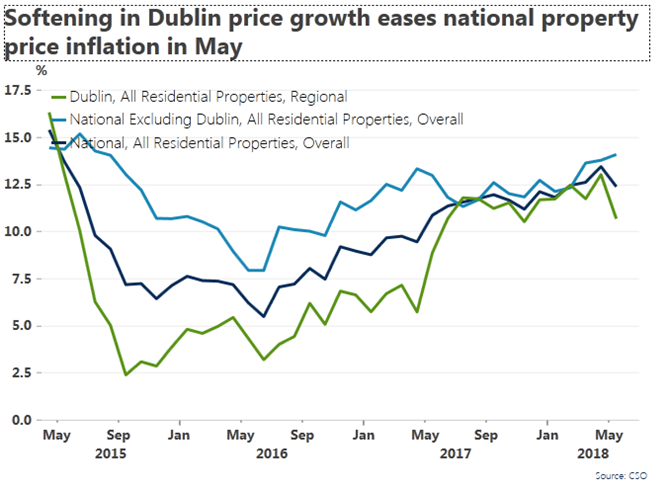 Outside Dublin, property price inflation accelerated from 13.8% in April to 14% in May- the fastest pace since August 2015. Property prices in the Mid-West (Clare, Tipperary and Limerick) saw the sharpest increase at 22% followed by a 17.8% in the West (Galway, Mayo and Roscommon) while the Border region (Donegal, Sligo, Leitrim, Cavan and Monaghan) showed the slowest pace of price increase at 3.7%.

The sharp upward revision to the April data coupled with possible distortions caused by severe weather during March (when many of the sales completed in May could have been agreed) and the intrinsic volatility of the monthly figures means we need to be careful not to over-interpret the significance of the May slowdown. However, there are several arguments why property price inflation might trend lower in coming months beyond the ‘base’ effects implied by large monthly increases seen through the summer of 2017.

First of all, construction figures suggest some clear improvement in new supply that may be augmented by indication of increased stock of existing dwelling on the market of late. Second, affordability constraints underpinned by the CBI’s Loan-To-Income and Loan-To-Value limits may be affecting the pace of demand growth. In this context, growth in the average mortgage loan size drawn down for property purchase has been consistently lower than property price inflation through the past year (+8.3% in Q1), implying an increasing financing gap for prospective purchasers. 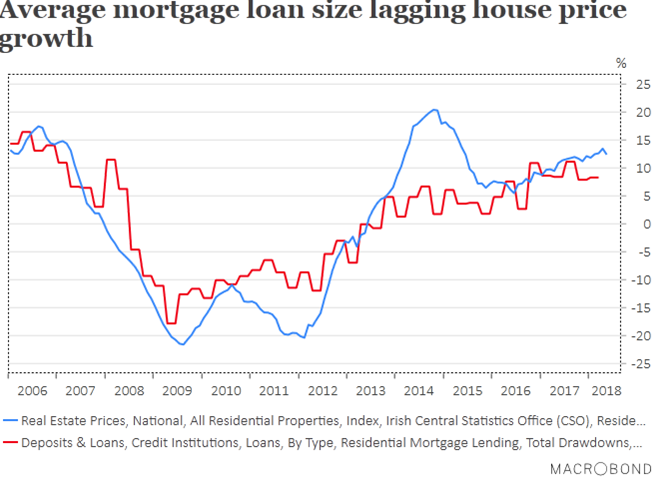 It remains the case that prospective new housing supply which, at less than 20k new units remains notably short of ‘normal’ demand levels in a healthy Irish economy, implying persistent support for Irish housing prices (as we described in our comment on the April house price data). However, as supply steps up and demand becomes more constrained by affordability, these changes should act as a brake on the speed of Irish property price inflation.

The nature of both the property market and Irish economic statistics mean the process by which house price inflation moves to a more sustainable path may not be a smooth one but the May residential property price figures at least tentatively suggest this process might be underway.