Irish residential property price data for November still show a strong year on year increase but they also suggest the temperature of the Irish housing market has cooled somewhat of late. The annual increase in property prices in the twelve months to November was 7.1%, down from 8.4% in October. The November increase is the slowest rise since July 2016 and represents a notable slowing from the three year peak increase of 13.3% recorded as recently as April.

Irish property price inflation has been on an easing trend since the early summer and we expect this to continue into 2019 where we see average property price inflation of around 4.5% provided a ‘no deal’ Brexit is avoided. However, the step-down in November was notably more pronounced than in previous months and was driven by the first monthly fall in prices since December 2016.

As the table above indicates, the slowdown in property price inflation in November was broadly based. The larger month-on-month price decline occurred in Dublin but the sharper drop in the annual rate was seen outside the capital.

While some seasonal weakening in property prices is not uncommon towards end-year, the particular softness of the November data likely reflects some specific influences. One element may be Brexit related nervousness which, at the margin, may have caused some would-be buyers to postpone purchasing.

While recent consumer and sentiment readings hint at behavioural changes due to increased caution, we don’t think this is likely to have been a key driver of the softer November property price data. There is a significant time-lag between finding a suitable property and concluding (and registering) the sale. As heightened Brexit uncertainty really only emerged in late summer, it is unlikely to have had such a speedy impact on official property price data for November.

It is likely that increased construction has improved the supply of properties in 2018 and this has had some moderating influence on property price inflation of late. Transaction growth slowed notably since summer, particularly in Dublin, suggesting that this impact might be lessening but there was a slight pick-up in trend growth in transactions (as measured by the three month moving average of filings by household buyers) both for Dublin and the rest of Ireland in November. So, it would appear that new supply is having some dampening effect on property price inflation.

A key factor in notably slower property price inflation of late could be borrowing constraints as financial institutions seek to ensure end year compliance with Central Bank lending limits. As the diagram below indicates a marked acceleration in the pace of growth in mortgage approvals for house purchase through 2016 and early 2017 was followed by a pick-up in house price inflation which persisted through spring 2018. The lag between the two is the result of the difficulties buyers have had in finding suitable properties and a related lengthy pipeline of mortgage approvals.

A flatter trend in mortgage approvals for house purchase through 2018 has been an important element in the recent slowing in house price inflation. That trend significantly reflected the Central Bank’s tightening in lending limits for mover-purchasers in its November 2017 review of its macro-prudential measures just as a modest easing of lending limits in the 2016 annual review likely contributed to the subsequent pic-up in mortgage approvals.  As the 2018 mortgage measures review did not change lending limits, this impact should not be repeated through the coming year. 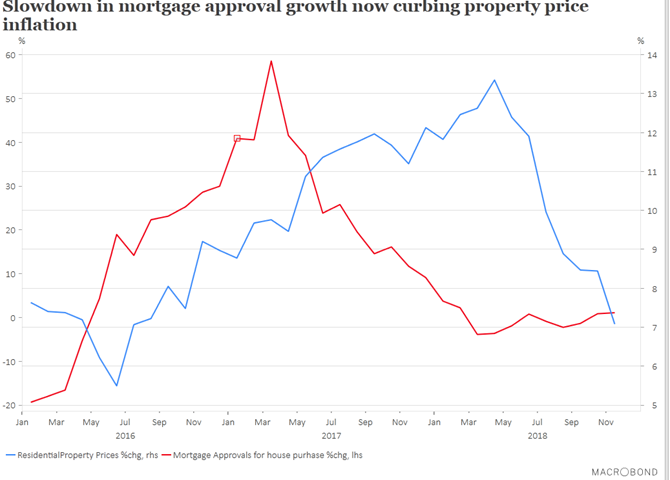 Our sense is that Brexit concerns could have had a marginal negative impact on the November property price data. More significantly, such concerns may add extra volatility and exert some downward pressure on property price inflation in coming months.  Uncertainty about the Irish economic outlook is hitting consumer sentiment and will make prospective purchasers more cautious about affordability. As a result, transaction levels and the path of prices could look weaker in early 2019 data even if the underlying Irish economic picture remains robust.  These considerations suggest that Irish property price inflation and property sales may remain on a bumpy path towards more sustainable levels as this year progresses.