Increased supply an element in slowdown but not the main driver

More notably, the monthly change in Irish property prices was -0.1% between January and February, marking the fourth monthly drop in a row, the first time this has happened since February 2012. This weakening has brought the annual rate of property price inflation to its slowest pace since August 2013 when the property market was just showing the first tentative signs of improvement.

Property prices outside the capital were flat month on month between January and February and only fell once of late whereas Dublin prices have fallen in each of the past four months. One small positive is that the 0.1% monthly drop in Dublin in February was notably smaller than in any of the preceding three months (0.7% in November and 0.8% in both December and January.

The slowdown in property price inflation is at least partly a reflection of notably increased supply-both actual and expected. While the 2018 output of 18k units still falls well short of potential demand, new homebuilding has increased by 25% or more in each of the past four years and similarly paced increases are expected to continue in coming years.  While the increase in new Dublin supply was stronger between 2015 and 2017, the pace of output growth was broadly similar to the rest of Ireland in 2018.

Demand remains robust and the spring KBC Homebuyer Sentiment Survey (here) found ‘pipeline’ demand of around 80k at present. Of course, ‘net’ demand for home purchase would be notably lower reflecting the activities of ‘movers’ but we estimate that incremental demand is in the region of 30-35k at present. The details of the Homebuyer Survey also suggest demand for properties in Dublin remains slightly stronger than elsewhere while jobs growth in Dublin at 3.8% y/y in Q4 ’18 was more than twice the pace of that seen elsewhere (+1.6%).

In circumstances where supply is improving but still falling short of prospective demand, the slowdown in property price inflation could reflect either affordability constraints or a postponement of purchasing decisions because of increased uncertainty linked to Brexit for example. While there may be some influence from increased buyer caution at the margin-the KBC Homebuyer Survey 49% of prospective homebuyers felt Brexit would negatively affect their home purchase, our sense is that this influence would not adequately explain the scale of slowdown in Irish property price seen in recent months.

Some sense of the degree to which affordability constraints may be biting in Dublin at present is suggested by today’s data that show the median price of a Dublin home at 370k is some 48% above the national average. More tellingly, this has been running around 9.3 times average earnings and as the diagram below indicates this may have reached peak affordability at this point. With earnings rising around 4.1% in late 2018, the February property price inflation data suggest this may now be a biting constraint on the trend in property prices in Dublin. 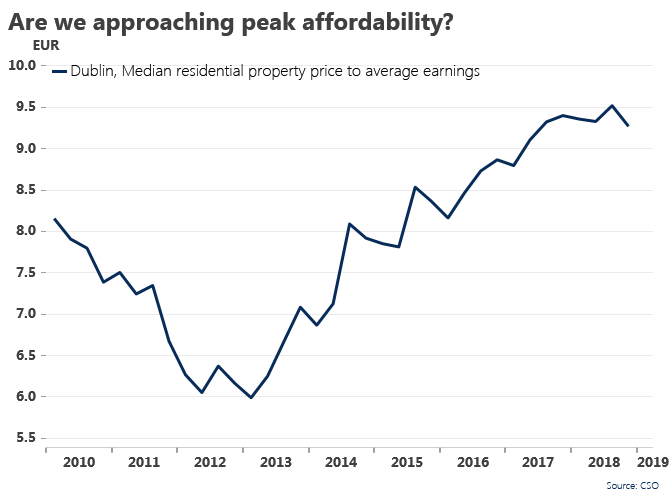 This affordability constraint is notably sharpened by the impact of Central Bank loan to income limits. The diagram below sets out how the ratio of Dublin house prices to compensation of employees has developed since the peak of the property boom. The compensation of employees data( figures were released today for the final quarter of 2018) includes both earnings and employments elements. So, it gives a sense of the aggregated 'weight ' of purchasing power. The diagram also illustrates the timing of the introduction of CBI Macro-prudential policy and subsequent annual alterations to the relevant lending limits. This seems to suggest CBI interventions have had a clear impact on Dublin property price trends. 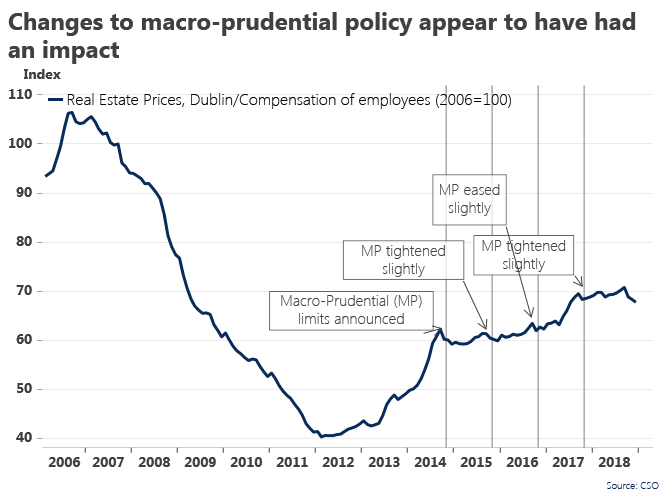