Strong Irish residential property price data for January suggest a continuation of the firmer trend in housing price inflation evident through the second half of 2016. This reflects a pick-up in demand for property that now appears to be gathering pace faster than the still tentative increase in new building.

A broadening of regional reach of Ireland’s economic upswing, affordability constraints and particularly limited supply in Dublin causing a shift in demand away from the city are all likely playing a role in these regional pricing dynamics but it is notable that the monthly price change was slightly stronger in Dublin than elsewhere.

A somewhat stronger trend in Irish housing prices of late appears to be driven by a step-up in demand that, in turn, reflects a range of factors. The most important is a strengthening trend in full-time employment as the economic recovery matures and broadens. This has caused the pent-up demand of recent years to crystallise into a notable increase in prospective purchasers.

As diagram 1 below illustrates, the turn in house prices initially lagged the improvement in the jobs market and a subsequent-catch-up was restrained by the introduction of Central Bank lending limits but the recent acceleration in jobs growth is symptomatic of a more broadly based improvement in domestic economic conditions that would be expected to underpin property prices. 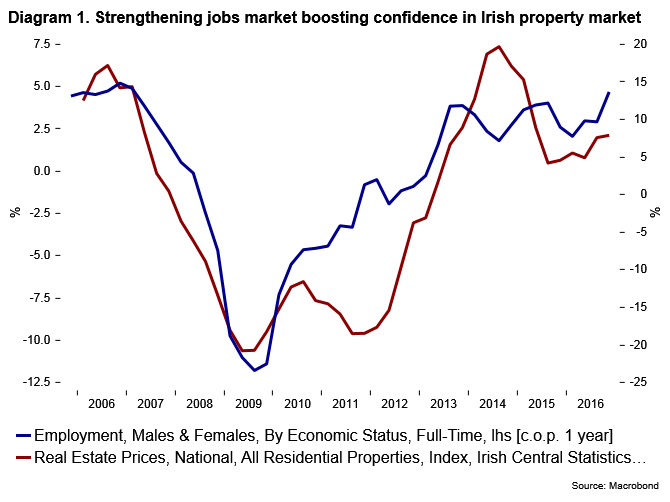 A further ingredient likely to be supporting demand in early 2017 is recent adjustments to policy settings, most notably the recent Budget’s introduction of the "help to buy" scheme and the Central Bank’s easing of its macro-prudential regulations. While still relatively recent initiatives (particularly CBI changes), it might be expected that the ‘announcement effect’ of such measures would quickly filter into price setting in the property market.

As diagram 2 below illustrates, policy shifts can have a significant impact on demand conditions as evidenced by the impact on mortgage drawdown growth of the ending of qualification for mortgage relief at end 2012 as well as the introduction of CBI lending limits. Changes in policy settings can be expected to add to demand in 2017 and imply the likely persistence of significant house price inflation in the coming year barring any marked adverse shock to the Irish economy. 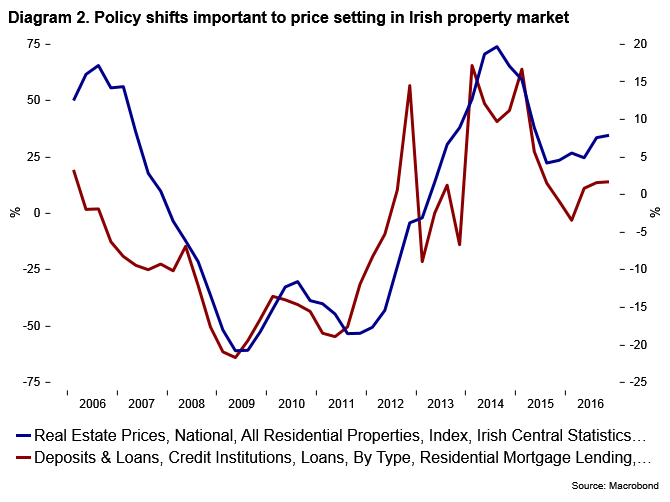 *Monthly house price figures are ‘provisional’ for two months and today’s release incorporates a slight downward revision to the previous figure for December from 8.1% to 7.9% and for November from 8.6% to 8.1%. These revisions don’t alter the substantive picture of strong property price inflation of late.