Encouraging split with prices up 2.2% y/y and transactions up 13.6%

Irish residential property prices ended 2020 on an exceptionally strong note, confirming anecdotal reports of buoyant market conditions on increased demand and subdued supply. In this regard, the Irish property market to an even greater degree than the broader Irish economy confounded earlier expectations of a marked downturn in the wake of the pandemic.

The coincidence of rising prices and increased transactions at end 2020 suggests current  market conditions are dominated by disappointed buyers rather than the distressed sellers that might have been feared in light of the economic and logistical disruptions caused by the coronavirus.

As a result of the buoyancy of prices in December 2020 and the weakness in corresponding month of 2019, the annual rate of property price inflation picked up from 0.2% in November to 2.2% in December, pushing the year on year increase to its strongest in nineteen months (May 2019 +2.6%).

Almost as notable as the improvement in property prices in December is the improvement in transactions which were 13.6% higher than a year earlier, the fastest increase since April 2018. The scale of the recent turnaround is forcefully seen in a comparison of the December increase with a 46% y/y drop reported for May during the first wave of the pandemic.

The improvement in property prices in December was broadly based but the monthly rise in Dublin of 0.4% was markedly smaller than the 1.3% monthly increase outside the capital. As a result, property prices outside Dublin are 3.1% higher than at the end of 2019 but the 1.2% increase in Dublin prices year on year is the first positive annual change since April and the strongest since February 2019.

Irish residential property prices increased by 0.3% on average in 2020, a clearly weaker outturn than the 2.3% increase recorded in 2019 and the weakest average annual outturn since 2012 but this is altogether stronger than was feared might be the case in the wake of the Covid-19 pandemic. Moreover, the December increase of 2.2% year on year points to significant positive momentum going into 2021.

The strength of Irish property prices is partly a reflection of the exceptional and greater than expected resilience of the Irish economy. European Commission forecasts published yesterday suggest Ireland will be the only economy to post positive GDP growth in 2020. While this owes much to the influence of the multinational sector, it is sometimes forgotten that those activities also result in significant numbers of often high paying jobs.

More generally, fulltime employment was 0.4% higher in the first three quarters of 2020 than in the same period of 2019. As the diagram below indicates, there has been a consistently strong relationship between  trends in property prices and in employment as a positive correlation of 0.86 between the two variables over the past twenty years might imply.

Critically, with policy measures strongly supporting employment and incomes in stark contrast to the contractionary settings of the previous crisis, the ‘macro’ backdrop to the Irish housing market has proven much less negative than might have been feared. 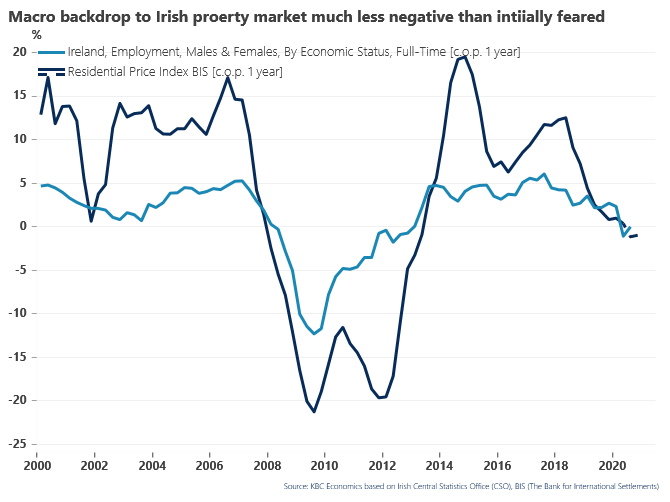 We also feel the ‘micro’ factors influencing the Irish property market proved more supportive than might have been envisaged through 2020. Clearly, restrictions on new building (and elevated fears in this regard) played some role. So too may have been a reluctance to put existing properties on the market. However, a more significant factor appears to have been the activation of a substantial element of latent property demand reflecting relatively low levels of property transactions in recent years that had resulted in many individuals and families being in properties ill-suited to their present circumstances.

Since 2010, property sales have averaged between 20-20,000 less per annum than might be expected in a healthy market (definitions of 'healthy' differ). As a result, as successive tranches of the KBC homebuyer sentiment survey suggest, perhaps as many as some 250,000 individuals/families may be living in a property they have outgrown.

For significant numbers of these, the experience of the pandemic through the advent of broadly based working from home and restrictions on movement highlighted the importance and inadequacy of current living circumstances and caused a significant element of this latent demand to be activated in circumstances of scarce supply.

With the Irish economy widely expected to improve through the coming year, ‘macro’ support for the Irish property market should persist. However, as housing demand and supply normalise and policy settings are adjusted, the path towards equilibrium for prices and activity could still be bumpy.