July increase of 10.4% y/y still robust but the slowest growth in fifteen months

Increasing output and affordability cutting the gap between demand and supply

Will slowing house price inflation lead to a more sustainable path for property and the broader economy?

Irish house price inflation slowed materially in July to 10.4% y/y from 11.9% in June, continuing a gradual moderation from the near three year peak growth rate of 13.4% recorded in April. The July increase is the smallest growth in fifteen months.

The pull-back in Irish property price inflation in July reflects two elements. The first is a gradual closing of a gap between demand and supply that owes something both to increased housing output and affordability constraints. In addition, as the diagram below illustrates, there was an outsized monthly increase of 2.4% in July 2017- the largest monthly rise in the past four years, which alsodepresses the year on year comparison.

The healthy but more modest monthly increase of 1% in July 2018 hints at an Irish housing market that is slowly and unevenly moving towards a more sustainable path. Diagram 1 below is intended to give some sense of this somewhat erratic progress by comparing the headline annual rate of property price inflation shown in solid lines with a measure of the more recent trend shown as dotted lines (representing the annualised rate of change in the three month moving average of each series). 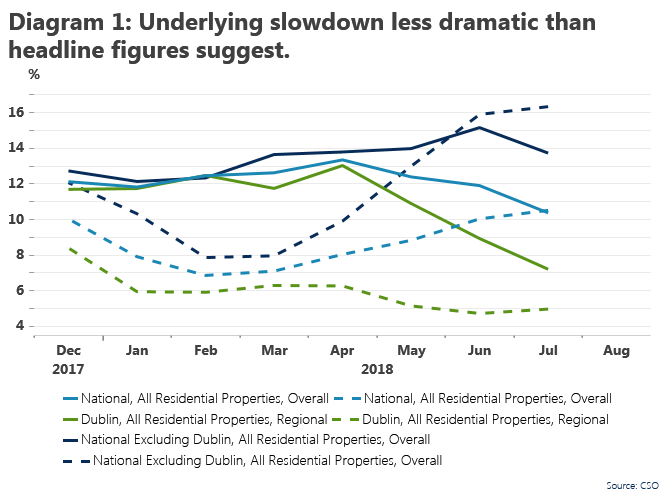 Our assessment of diagram 1is that at the national level, recent trends are broadly consistent with a 10% annual rate of increase but there has been a marked slowdown in property price inflation in Dublin and a partly offsetting pick-up in property prices outside the capital.

Last week’s jobs and population data show increases in Dublin economic activity sharply outpacing rates elsewhere (employment up 7% in Dublin against a 1.9% increase in the rest of Ireland whereas the population of the capital increased by 1.5% against a 1.3% rise elsewhere). Other things being equal, this would imply property prices should be rising faster there than elsewhere but today’s house price data suggest increased supply and affordability are notably restraining Dublin property price inflation.

CSO data indicate property transactions in Dublin were 5.9% higher in the first half of 2018 than in 2017 whereas transactions in the rest of Ireland increased just 1.6%. While these growth rates were somewhat slower than 2017, it might seem that prices in the capital have now reached levels where improved supply is an increasingly important influence.

Some perspective on today’s house price data is provided by the publication yesterday by the Central Bank of quarterly financial accounts for Q1 2018. As the diagram below illustrates, movements in Irish house prices have been the key driver of marked changes in the financial well-being of Irish households during the past fifteen years (The CBI data go back to 2002). The red line depicting annual changes in household net worth tends to closely follow the black line depicting changes in house prices and the green line showing changes in the associated value of housing assets held by households.

What makes current circumstances notably different to those of the mid 2000’s is that the current momentum in house prices is not associated with a dramatic surge in financial liabilities (orange line). In aggregate, Irish households are still deleveraging even though new lending is growing significantly and therefore slightly dampening the pace of increase in household net worth (red line) relative to house prices (black line). 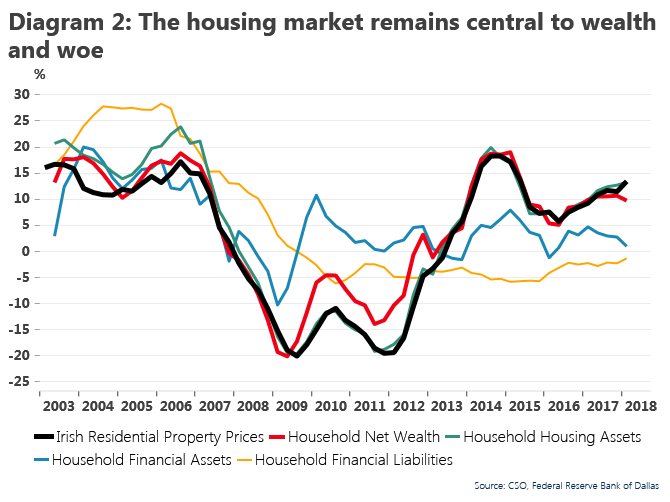 The recent momentum in property prices and the related rise in household net worth can’t be attributed to booming credit growth. Instead, it appears to reflect both a reversal of an earlier overcorrection in house prices and the particular strength of the Irish economy at present.

As various metrics such as ECB estimates suggest Irish property prices are not notably under- or overvalued at present, this would suggest that Irish house prices (and associated wealth movements) should broadly mirror the trajectory of the Irish economy if they are to move onto a sustainable path.

A potentially problematic issue in terms of stability in the property market is that the Irish economy is still seeing rapid rates of employment and population growth that are reflective of a recovery that is still a work in progress. Indeed, while the net worth of the Irish household sector at €732bn now exceeds its pre-crisis peak, this partly reflects a notably increased number of households.

We estimate that the wealth of the average household is still some 14% lower than in early 2007. So, as we noted in our recent consumer sentiment analysis, a significant driver of the upswing generally and the particular pressures on housing is that there are more Irish households rather than that Irish households now have more.

The message of diagram 2 is that a key task for policymakers, households and financial institutions is to try and ensure that property prices and Irish household net worth continue to move towards a more sustainable and less volatile path. The easing in July property price inflation is encouraging in this regard in that it suggests increased housing output and affordability issues may be closing the gap between property demand and supply. This suggests that the immediate task for policy may be to avoid unhelpful interventions that don’t allow that process to continue.