Annual property price increase at 12.3% in December is fastest in two and a half years.

The 12.3% annual increase seen in December 2017 was the fastest since June 2015 and underlines how strong the current momentum is in Irish property prices.  We remain of the view that the Irish housing market is in the early stages of moving to more modest and, consequently, more sustainable rates of increase in the coming year. However, the December data emphasise that this may not be an entirely smooth process.

Irish property prices increased by a relatively modest 0.5% between November and December but this goes against a pronounced seasonal tendency which saw monthly price declines recorded in December in each of the previous three years. A seasonal adjustment process we applied to the data suggests that the underlying change in December corresponds to a monthly increase of around 1%, roughly consistent with the headline year-on-year pace of increase.

Continuing strength in property prices at present is by no means unique to Ireland reflecting the twin drivers of healthy economic conditions and low borrowing costs now being seen globally--even a struggling UK economy is reporting property price inflation of 5.2% at end 2017. However, the pace of increase in Irish property prices is notably faster than elsewhere as diagram 1 below shows. 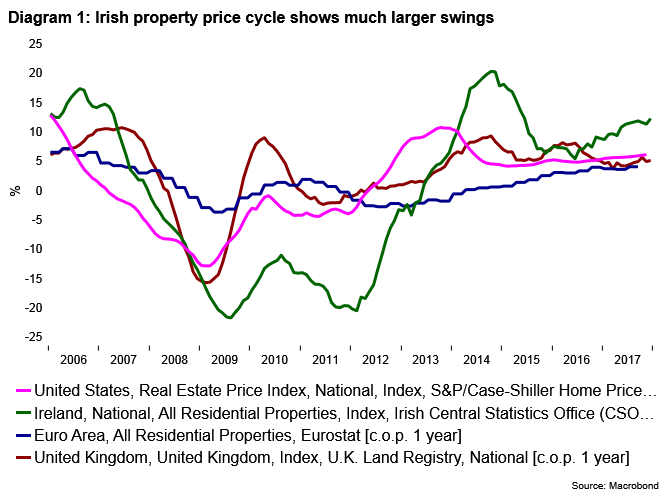 The December data mean that Irish housing prices have increased by 72% since their March 2013 low-point but they still remain some 23% below their previous peak. An indication of the intensity of the forces driving movements in the Irish property market is suggested by separate CSO data that show private rents ended 2017at levels some 18.5% above their 2008 peak.

Upward pressure on Irish housing prices is underpinned by a continuing imbalance between demand and supply. The degree of this imbalance is easing only modestly and the market may move only gradually further towards ‘normalisation’ in the year ahead.

New building remains some significant distance below the estimated 35k dwellings needed annually to meet ‘normal’ demand. Some improvement in supply was signalled by a rise in house price completions to 19.3k in 2017 from 14.9k in 2017 and further progress should be seen in 2018.

Similarly, the dearth of transactions over the previous seven or eight years has created a significant measure of pent-up demand that has forcefully emerged of late. This ‘bulge’ in demand will slowly ease in the next year or two.

In addition, affordability constraints will increasingly come into play in an Irish economy where average earnings are only rising by about 2%. However, as this will not bite evenly, it may initially restrain transactions rather than prices.

As the broad Irish economic backdrop remains very supportive and the gap between housing demand and supply will not fully close for some time, a range of factors are likely to offer support to Irish property prices in the year ahead.

A further consideration is whether at current levels, Irish house price valuations might be stretched. While there is no single metric that can determine that issue, the ECB is among a number of institutions that use a range of approaches to arrive at estimates of ‘fair value’.

As diagram 2 below indicates, this ECB research suggests Irish residential property prices were about 10% below the levels suggested by various fundamental drivers in the third quarter of 2017. The past year has seen Irish property price inflation exceed the pace suggested by these fundamentals, thereby materially reducing the extent of undervaluation.

A healthy Irish economy and a further gradual movement towards ‘fair value’ estimates might suggest Irish house prices could sustain reasonably healthy single digit increases in the year ahead. 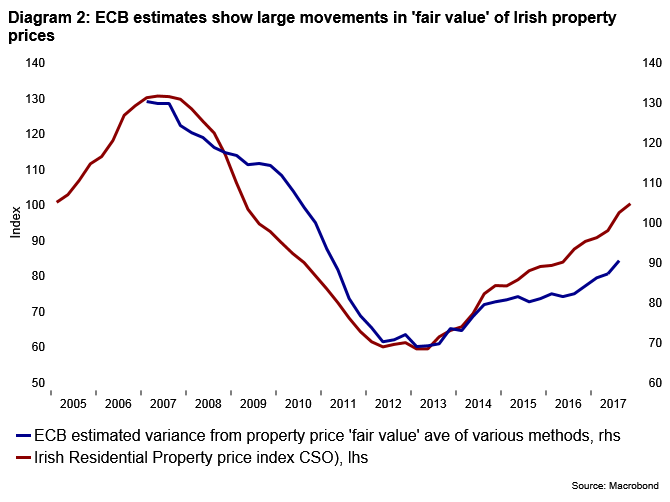