Numbers at work up for 3rd quarter in a row.

• Jobs numbers suggest economic growth forecasts of 1% in 2013 not ambitious.

As diagram 1 below shows, the Irish economy has moved well beyond the sharp job losses and the surge in unemployment that began in 2008 but progress towards a strong recovery is likely to be relatively slow. Encouragingly, the trend in numbers at work and in unemployment moved onto more clearly more positive trajectories through the course of 2012 and this has been sustained in early 2013. 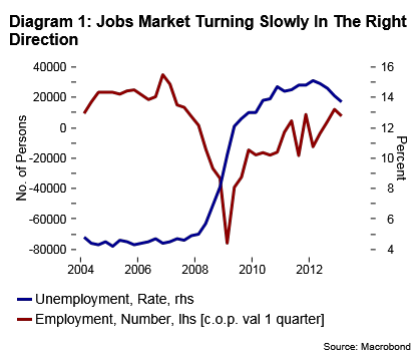 The degree of improvement in the Irish labour market in early 2013 was modest and a significant level of the new jobs is part-time but this is to be expected. Through the past year, the jobs market has worsened across the Eurozone and, in Ireland, fiscal adjustment reduced spending power in Ireland while redundancies in the Public Sector and financial services also depressed numbers at work. In such circumstances, it is scarcely surprising that jobs growth was limited. The more notable feature is that it has remained positive of late in a very difficult economic environment.

Numbers at work were 0.4% higher in the first three months of 2013 than in the final quarter of last year which was revised upwards. This leaves the first quarter number about 1% higher than the average for 2012. This suggests that 2013 could be the first year since 2007 to record a rise in employment. In turn, this implies domestic demand should come close to stabilising and it would seem that economic growth forecasts of around 1% are not too ambitious and could prove conservative.

The rise in the numbers at work in the Irish economy in the past year reflects a significant contribution from part time work. Seasonally adjusted data suggest that there has been some increase in full-time employment in the past couple of quarters but between the first quarter of 2012 and 2013, numbers in full-time employment fell marginally (-3.7k or -0.3%). It is to be expected in circumstances where growth is at best sluggish and the broader environment uncertain that employers would be slow to add to full-time payrolls. Even if the increase in part-time jobs suggests an element of underemployment, it represents a typical mechanism in transition phases of economic cycles. The weakness in full-time employment is also significantly influenced by the influence of Public Sector redundancies and more general constraints on Public Sector activity. Numbers at work in the Public Sector fell by 5k (-1.3%) between the first quarter of 2012 and 2013, implying numbers working in the private sector increased by 25.6k (+1.8%) over that period.

The rise in numbers at work has contributed significantly to a decline in unemployment. The seasonally adjusted decline in unemployment was 6.6k in the past quarter while the decline since a year ago was 29.9k. This translated into a drop in the unemployment rate from 15.0% in the first quarter of 2012 to 13.7% in the first quarter of 2013, the lowest rate in about three years. The likelihood is that emigration also contributed to this drop in the unemployment rate but its relative importance probably declined somewhat of late, partly because of the improvement in employment and also because other elements of today’s jobs data suggest net emigration may have peaked. Today’s data indicate the population aged 15 and over has stabilised in the past year, having fallen somewhat in the year to April 2012. Assuming an unchanged ‘natural’ increase in this cohort, this suggests that net migration in the past year was probably similar to or slightly lower than that seen in the previous twelve months.

Even if migration may have peaked, the difficulties facing younger entrants to the work force remain substantial. The number of under 35s at work in the past twelve months has declined by 15.7k (-2.4%) whereas the number of over 35s at work increased by 36.2k (+3.2%). As a result, the number of under 35s in the labour force declined by 42.2k (-5.1%) whereas the number of over 35s increased by 32.8k (+2.5k). As younger age groups tend to have a somewhat higher propensity to spend, this demographic divergence will act to restrain consumer spending at the aggregate level. Indeed, together with the preponderance of part time employment, weak earnings, adverse Budget effects and lacklustre consumer sentiment, it seems likely that consumer spending could decline again in 2013. However, a less harsh Budget 2014 and a continuation of the positive trajectory in employment seen in today’s data for the first quarter could translate into a notably more positive outlook for consumer spending next year.