3.5% increase y/y broadly based across regions and sectors but less so across age groups

Irish jobs growth was both exceptionally and unexpectedly strong in the final quarter of 2019. These data emphasise the surprisingly strong momentum of the Irish economy at the turn of the year and suggest solid support for spending power in 2020.

Numbers at work were 3.5% higher than in the final quarter of 2018, a net jobs gain of 79.9k. This compares with jobs growth of 1.4% in the US and 1% in both the Euro area and UK over the same period. Irish employment gains were broadly based, with the fourth quarter data showing annual increases in all geographic regions and 12 out of 14 sectors (the exceptions being wholesale/retail and miscellaneous activities).

In circumstances where concerns about Brexit on one side and capacity constraints on the other suggested the risk of a marked slowing in Irish job growth in late 2019, a quarterly increase of 1.3%, which translates to a 5.4% annualised growth represents a notable positive surprise. It marked a clear pick-up in the pace of job creation from that seen in the two previous quarters and represents the second fastest quarterly gain since late 2006.

As the diagram below indicates, the increase in Irish employment in late 2019 was accompanied by a  pick-up in labour force growth to 2.5% y/y, the fastest rise since early 2008.  In part, this reflects ongoing strong net inward migration but a more notable feature of the final quarter of 2019 was a marked pick-up in the participation rate which at 62.6% reached its highest level since the second quarter of 2010.

The pick-up in the participation rate is likely associated with a significant pick-up in part-time employment which was 6.6% higher in Q4 2019 than a year earlier. Encouragingly, this was concentrated in an 8.6% increase in those opting for part-time employment (by declaring themselves not underemployed) whereas numbers describing themselves as part-time but underemployed were unchanged from a year earlier. 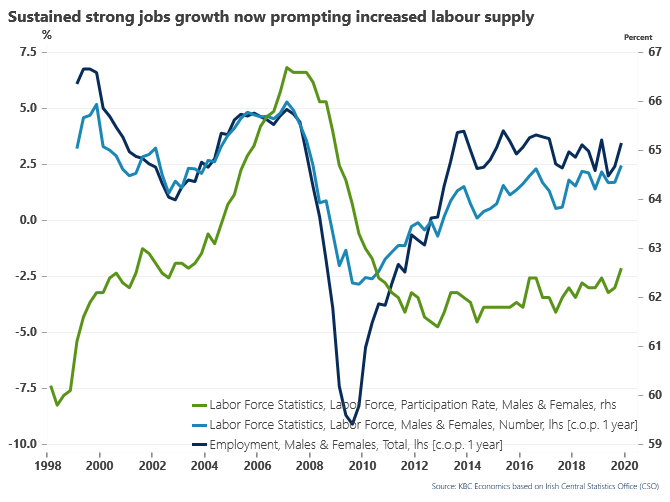 The strength of jobs growth in late 2019 buttressed by the sharp increase in part-time employment and significant inward migration emphasises the degree of difficulty in defining ‘full employment’ for the Irish economy (other economies such as the US are facing broadly similar problems at present). By extension, this may hint at some scope to run a ‘high pressure’ Irish economy in a manner that might see a greater spread of the benefits of economic recovery. Such considerations should  inform discussions on ‘fiscal space’ in negotiations around the formation of the next government.

Recent election results might suggest that macroeconomic developments, as traditionally measured, do not resonate strongly with the population at large. One consideration in this regard is that today’s CSO data suggest that job gains are not being spread evenly across age group. For example, those aged between 15 and 34 represent 32% of the adult population but only accounted for 18% of job gains, while the unemployment rate of the under-35s at 6.5% is nearly twice the 3.2% rate for over 35s.

In the same vein, while employment growth is strong, this is not translating into increased access to housing In this context, the diagram below gives some sense of the extent to which house price developments have diverged from broader macro conditions-as measured by employment trends- in Ireland and other countries.

Although house prices have risen faster than employment in all these economies in recent years, the gap in Ireland is markedly greater than elsewhere even if it is notably less pronounced than it was in 2007. It should be noted that employment gains were also markedly stronger in Ireland than elsewhere. The diagram below suggests that stronger jobs market inclusion may serve to emphasise housing market exclusion more forcefully. 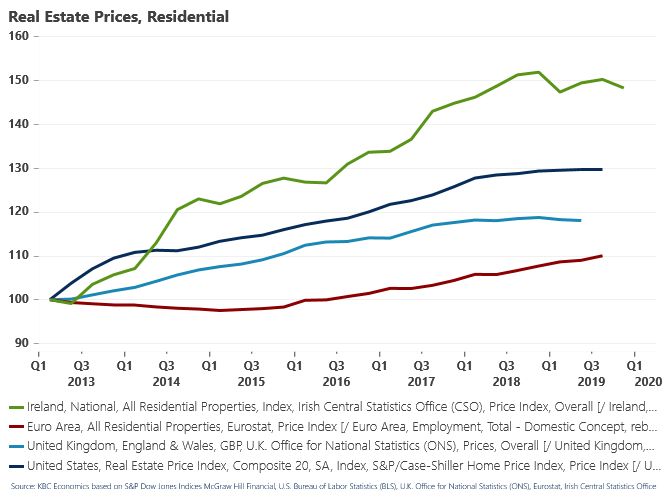