Jobs data consistent with growth in Irish economic activity of around 4.5% in 2018

Jobs data for the third quarter of 2018 suggest the Irish economy continues to have strong positive momentum but they hint that the pace of growth may be cooling slightly of late. However, ongoing solid job gains suggest any slowdown is modest and contained to this point.

On the basis of historic trends in productivity (using KBC estimates of ‘real GNI*), we think these jobs data are pointing to activity growth in the Irish economy of around 4.5% in 2018, a broadly similar outturn to 2017. However, some slowing in the pace of full-time employment growth of late hints that 2019 could see activity growth of slightly less than 4% (though a ‘no deal Brexit would clearly imply a markedly weaker figure).

Numbers at work were 3% (or 66,700) higher in the Irish economy in the third quarter of 2018 than a year earlier, a slightly slower increase than the 3.4% pace (+74,100 jobs) seen in the second quarter. Moreover, the seasonally adjusted increase between the second and third quarters was 0.5% compared to 0.7% previously. The annualised quarterly increase at 1.9%in the third quarter compares to 2.7% previously, also points to a modest slowdown in the pace of growth of late.

We think the main message of today’s data is that the Irish economy remains set on a healthy path. In this context, the comparison in diagram 1 of today’s Irish numbers with the latest figures for the US, UK and Euro zone shows Irish jobs growth is running twice to three times the rate being seen in key trading partners. 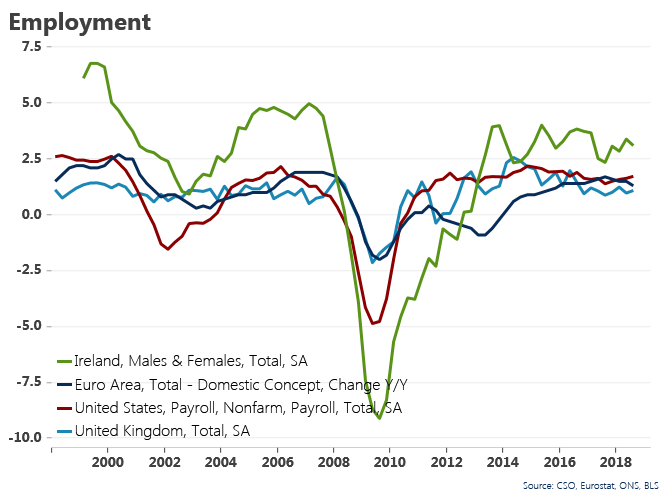 While sustained strong jobs growth may be the broad picture emerging from today’s Irish jobs data, it is also important to assess the significance of the somewhat softer pace of increase in employment seen in these numbers. We think a combination of three influences entailing demand, supply and measurement factors is at play. In our opinion, slightly softer demand is likely to be somewhat more important than other influences.

The easing in the pace of jobs growth could reflect changes in the demand for labour in Ireland stemming from slower global growth of late and Brexit related caution. This would be consistent with slower quarterly jobs growth of late in US, UK and Euro area. It would also be consistent with the softer tone of the KBC Bank/Chartered Accountants Ireland business sentiment index for the third quarter that hinted some companies were seeing a precautionary pause in hiring related to ‘crash out’ Brexit concerns. The persistent weakness of employment in the border area of late -the only region to record negative employment growth in the past two quarters- could also be a reflection of Brexit/Sterling weakness problems. 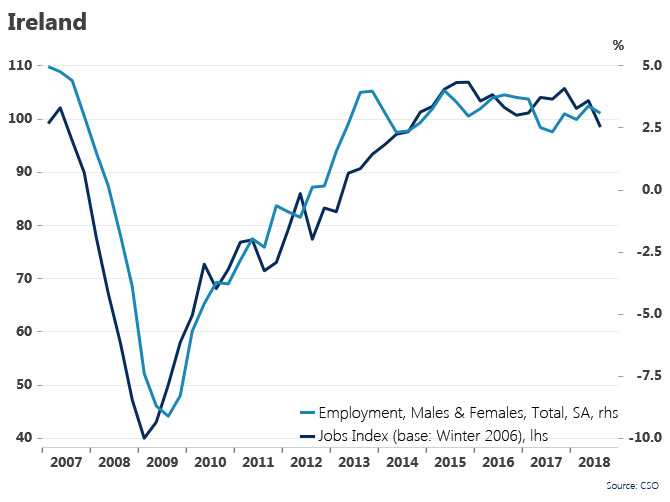 The slowdown in employment growth could also owe something to a decline in the ready availability of suitably qualified workers with specific skill sets in sectors as diverse as construction and technology. With numbers at work moving further above the pre-crisis peak (now 28k higher) and unemployment moving towards 5%, the capacity to draw appropriately skilled workers from those unemployed may not be anywhere near as easy as a year or two ago.

Diagram 3 below suggests that the pace of decline in unemployment has eased somewhat through the last year or so relative to the trend in employment gains. If this is an increasing constraint, some evidence of supply shortfalls may be provided by third quarter wage data released next week. 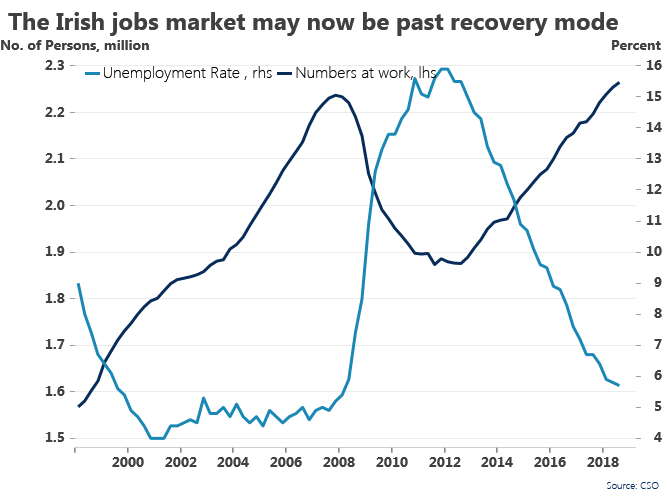 Our sense is that constraints in terms of the supply of labour in the Irish economy are notably eased by ready access to a large pool of workers from abroad. Diagram 4 below gives a sense of the extent to which there has been a switch from an initial strong correlation between job gains and declines in unemployment have given way to an increasing link between employment growth and net migration. Non- Irish nationals now account for 16.2% of employment, fractionally higher than the 16.0% peak seen in early 2008. Of course, to the extent that migration flows constrain the pace of increase in domestic wages, related capacity pressures shift to areas such as housing rents and prices. 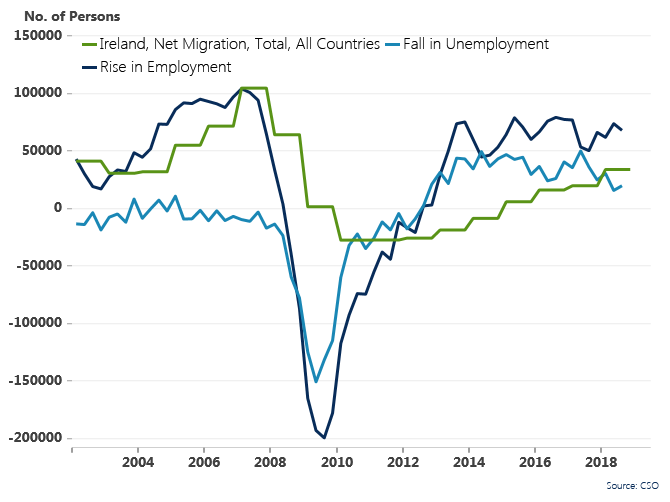 While we see demand and to a lesser extent supply considerations largely explaining the modest slowdown in Irish jobs growth of late, we think statistical issues may also have played some part. The third quarter survey is the first time it has been possible to make a full year-on-year comparison of quarters both based on the CSO’s new labour force survey, introduced in 2017. At the margin, small changes in sampling and questions can have some impact on these data. So, we would be slow to make too much of what is a modest change in the rate of jobs growth of late.

A notable aspect of today’s data is a marked easing of growth in fulltime employment (to 2.5% from 4.2%) and a corresponding sharp pick-up in part-time employment growth (to 5.1% from 0.3%). Our sense is that this could reflect changing seasonality in some employment categories rather than an inflexion point in hiring patterns but we also feel this may be partly due to statistical quirks.

With employment growing at a more modest pace in the third quarter and the labour force continuing to expand, unemployment fell slightly slower than previously estimated. The unemployment rate is now put at 5.7% in the third quarter of 2018 (previously 5.6%) while the initial monthly number for October of 5.35 is revised to 5.5%. These statistical revisions suggest less mechanical ‘overheating’ pressure than previously thought but don’t alter the broad picture of an Irish economy seeing strong growth and increasing resource utilisation.