Buoyant jobs data for the first quarter of 2017 suggest momentum in the Irish economy continues to build and broaden. A combination of healthy external demand and a pick-up in domestic spending is producing strong and widely felt job gains that are notably faster in Ireland at present than elsewhere. 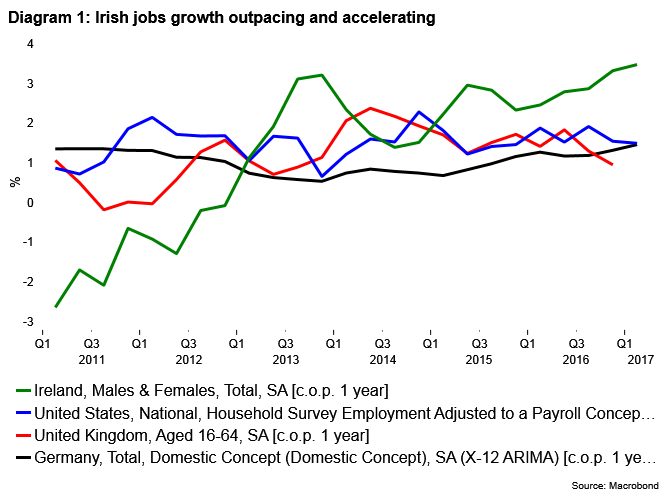 An improving employment picture for younger age groups appears to be encouraging a pick-up in inward migration. While there are also indications of increased female participation in the workforce, the health and broader basis of job creation is continuing to put downward pressure on unemployment.
Numbers at work in Ireland increased by 68.6k (+ 3.5%) in the year to the first quarter of 2017. This represents the fastest pace of increase since the third quarter of 2007. Moreover, the quarterly increase at 19.3k represents a 0.9% gain (or 3.6% at an annualised rate) which implies momentum has remained significant of late.  On the basis of the traditional (if somewhat volatile) relationship between growth in GDP and employment, these data might suggest our current GDP growth projection for 2017 which envisages a 4% increase may be too conservative.

The step-up in jobs growth of late appears to reflect three particular influences.  First of all, in contrast to earlier expectations, the external economic environment has been notably more supportive of late and this likely contributed to the fastest annual pace of increase in jobs in Industry (+6.1% or 13.7k jobs) over the eighteen years for which these data are available.

It must be emphasised that employment in industry saw a severe shake-out through the downturn which means that number at work in this area are still 12.8% or 39k less than at the beginning of 2007 but today’s numbers suggest that companies may have been overly cautious in relation to sustainable headcount both in recent quarters and more generally through the cycle. In the same vein, the continuing health of Ireland’s multinational sector likely contributed to solid increases in employment in Information and Communication (+8.5% or 7.5k jobs).

A second important, if more obvious, influence on recent jobs data is the upswing in the Construction sector. Numbers at work in this area increased by 8.3% or 11k in the latest twelve month period, a similar outturn in terms to the number of jobs added to the pattern of recent quarters.

Again, recent gains have to be seen in the context of a drop in building jobs from a pre-crisis peak of 276k to a low-point of 97k in 2013. In light of the continuing shortfall in construction output relative to demand, the current level of employment in Construction at 142.8k still looks too low although, at 6.9% of Irish employment, the number of workers in this area is notably higher than in the US (5.9%). Moreover, the impact of additional construction workers on the prospective supply of new housing in Ireland is likely less important than effect the broader strength of job market conditions is having on housing demand at least in the very near term. These considerations emphasise the difficulties in ‘right-sizing’ Irish construction to a level that can be sustained.

A third driver of the strengthening in the Irish jobs market of late is a recovery in domestic spending that at least in part reflects a more supportive fiscal stance. The latter is particularly important in solid increases over the past twelve months in employment in Health and related areas (+3% or 7.5k jobs), Education (+2.7% or 4.1k jobs) and Public Admin (+2.2% or 2.1k jobs).  It might also be expected that these jobs might be more regionally diverse than in other sectors.

The pick-up in domestic spending, allied to cost improvements of recent years, also likely contributed to a strong increase in employment in Accommodation and Food services (+6.9% or 9.8k jobs).

A particularly encouraging aspect of today’s data is evidence of an improving Irish labour market for younger people. As diagram 2 indicates, the two cohorts showing the largest increase in numbers at work were those aged 20-24 (+3.8k) and 25-34 (+2.5k) with those in 35-44 age group reporting a 2.4k increase. As the diagram indicates, younger age groups also suffered heavily in terms of job losses during the downturn. 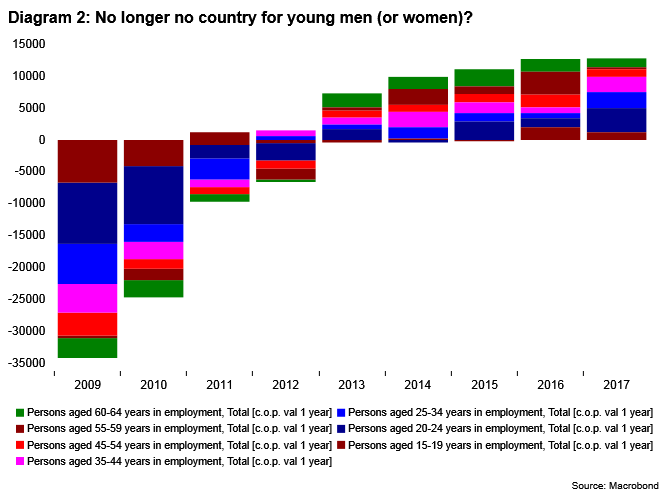 Improving job opportunities have also led to a pick-up in labour force growth to a 1.7% pace (from 1.2% in Q4 2016) that represents the fastest increase in the Irish labour force since the first quarter of 2008. This emphasises the exceptional flexibility of the Irish jobs market and its particular sensitivity to the health or otherwise of Irish economic conditions.

A key aspect of the flexibility of the Irish jobs market is the influence of migration flows. Today’s data show the population of those aged15+ has increased by some 40k in the past twelve months, the largest increase since late 2008. On this basis, we reckon, net inward migration has picked up from 3.1k in 2016 (the first positive reading since2009) to between 15 and 20k at present.  The graph below emphasises the strength of the negative relation between changes in unemployment and the change in the population over 15 (the diagram inverts the unemployment rate on the right hand scale). On historic trends, the fall in unemployment might be expected to lead to a marked pick-up in inward migration in coming years. 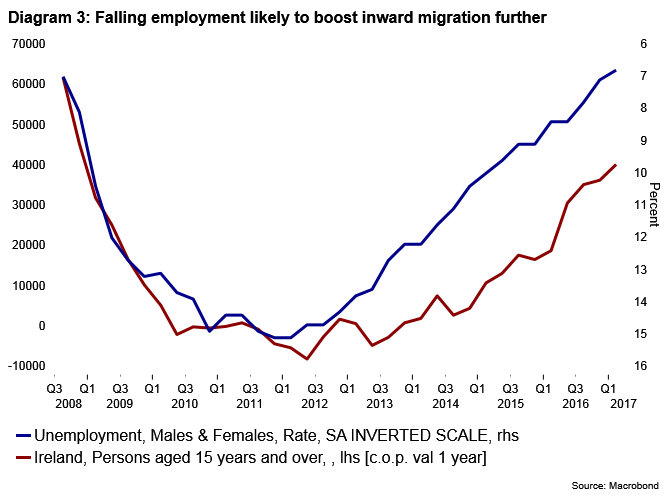 The pick-up in labour force growth means that the drop in unemployment of late was slightly smaller than previously thought. Irish unemployment is now estimated at 6.4% for April 2017 rather than the previously published 6.2% figure.  As this adjustment reflects a sharper increase in the labour force in response to healthier job market conditions, it should be regarded as a positive development.

In summary, across a broad range of metrics, Irish jobs data for the first quarter of 2017 paint a picture of encouragingly strong economic performance, with momentum building and broadening in employment growth (and presumably in economy-wide activity) of late.

It must be acknowledged that downside risks to Irish economic growth persist most notably in the shape of potentially important prospective changes to UK and US policymaking. Indeed, in a slight weakening in retail and wholesale jobs in the past three months (down a statistically insignificant 0.2%) and the fact that the Border region was the only area to see numbers at work fall in the past twelve months (albeit by a similarly statistically insignificant 0.2%), there may be slight hints at some difficulties now being posed by Sterling weakness and the threats associated with Brexit.

However, the broader strength in today’s jobs data seems to accord with other evidence from a range of survey indicators in suggesting that the Irish economy has begun 2017 on a stronger trajectory than previously envisaged. In this regard, the improvement in employment and an associated pick-up in inward migration underscore the increasing demand pressures now being felt in the Irish housing market.
A corollary is that the weakness reported in income taxes of late does not appear to reflect ‘macro’ developments in the jobs market. At the margin, a greater incidence of employment increases among younger age groups might act to restrain aggregate wage growth but the broad basis of the improvement in labour market conditions in early 2017 would tend to argue against the likelihood of any systemic deterioration in the quality of employment gains.