2.3% y/y increase in employment still healthy but a clear stepdown

Unemployment rate revised higher as supply of labour picks up

Irish employment growth remained solid in late 2018 but jobs data for the 4th quarter show a clear slowing in the pace of jobs growth that we think mirrors a softening in Irish growth dynamics that may reflect at least in part some impact from Brexit related uncertainty.

Numbers at work in the Irish economy were 2.3% higher in the final three months of 2018 than a year earlier. As diagram 1 below illustrates, this is a notably faster pace than seen in major partner economies such as the US (+1.9%), the Euro area (+1.3%) or the UK (+1.4%). However, the pace of jobs growth eased notably in late 2018 in Ireland in contrast to all of these other areas where the quarterly pace of growth (not illustrated) picked up in the final three months of 2018. 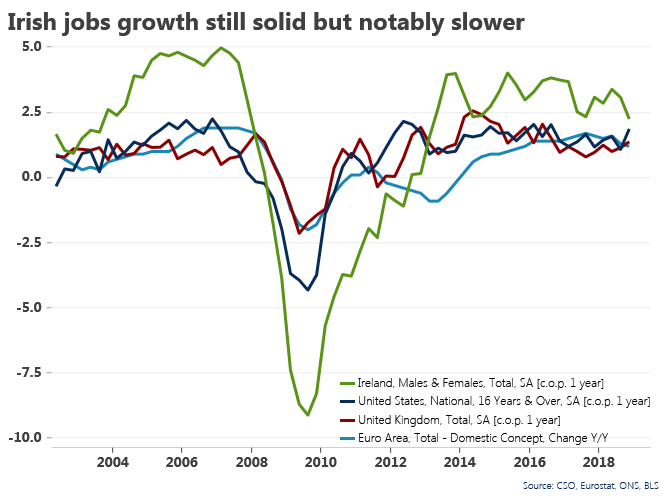 Importantly, with labour force growth picking up and the unemployment rate revised higher, softer Irish jobs growth of late appears to reflect slower growth in demand rather than shortcomings in supply. So, we would not interpret the data as a signal of tightening capacity constraints in the Irish economy.

A notable feature of the new numbers is an upward revision to the unemployment rate which is now put at 5.7% in January 2019, down only fractionally from the 5.9% rate reported for January 2018. This reflects a pick-up in labour force growth which increased by 1.8% in 2018 compared to a 1.1% increase in 2017.

The areas showing the largest increase in numbers of non-Irish nationals employed in the past twelve months were healthcare (+10k), support services(+9k) and hospitality (+8k). Perhaps surprisingly, the number of non-Irish nationals working in construction fell by 6k at the same time as overall employment in the sector increased by 10.6k.

A key strength of the Irish economy is its flexibility. A central element in this flexibility is the role of migration flows as a 'safety valve'. In circumstances where economic activity has risen strongly, it is to be expected that employment of non-Irish nationals will rise sharply. This facility strongly enhances the capacity of the Irish economy to sustain rapid growth. As household income growth picked up alongside a modest acceleration in wage growth in 2018, these data underline the importance of economic migration to Irish growth prospects.

The sense that demand conditions may be playing some role in slower jobs growth is suggested by divergences in regional data that show employment in Dublin increased by 3.8% between Q4 2017 and Q4 2018 whereas employment in the rest of Ireland increased by 1.6%. Two regions, the mid-West (-4.6%) and the Border (-1.3%) reported lower employment than a year earlier. In both instances, job losses were seen across a wide range of sectors.

The Q4 numbers show numbers at work in Ireland at a new all- time high of 2.272 million, up some 1.6% (or 35K) higher than the 2007 pre-crisis peak. We would still see recovery as a work in progress. Over the same timeframe, Ireland’s population increased by a cumulative 11%. Moreover, since late 2007, numbers at work climbed by a cumulative 7.4%, across the Euro area by 7.3% in the US and by 10.2% in the UK.  These comparisons would appear to suggest scope for sustained solid growth in Irish employment provided that economic activity remains healthy.

The outlook for Irish jobs growth through 2019 is heavily predicated on the manner and timing of the UK’s exit from the EU. A ‘soft’ Brexit entailing a transition period and a reasonably close future economic relationship between the UK and the EU would probably see the Irish economy perform strongly in 2019 and the associated easing in uncertainty could even lead to a brief Brexit ‘bounce’ in jobs growth.

In contrast, if the UK were to ‘crash out’ of the EU at the end of March, this would put the Irish economy on a notably poorer footing. With offsetting policy actions at national and EU level, Irish economic growth in 2019 might still remain modestly positive. This would lead to a marked stepdown in activity growth which would likely produce a painful Brexit ‘bump’ in the jobs market.

Job gains could still be envisaged in 2019 in multinational companies, in construction, in the public sector and in some private sector services such as health and education. More generally, there is a strong pipeline of announcements now being filled and also healthy momentum in the jobs market implying strong carryover. However, these positive developments would be significantly offset by material job losses in a range of areas affected directly and indirectly by Brexit, implying challenging job market conditions as 2019 progressed.

Our expectation of a ‘soft but not smooth’ Brexit implies an increase in employment of just over 2% in 2019 and, hence is broadly consistent with the easing in jobs growth seen in late 2018.


This non-exhaustive information is based on short-term forecasts for expected developments in the economy and financial markets. KBC Bank cannot guarantee that these forecasts will materialize and cannot be held liable in any way for direct or consequential loss arising from any use of this document or its content. The document is not intended as personalised investment advice and does not constitute a recommendation to buy, sell or hold investments described herein. Although information has been obtained from and is based upon sources KBC believes to be reliable, KBC does not guarantee the accuracy of this information, which may be incomplete or condensed. All opinions and estimates constitute a judgment as of the date of the report and are subject to change without notice.​