Details suggest jobs recovery is spreading as well as strengthening

Unemployment drops below 7% for first time since mid-2008

Solid momentum provides some comfort as Brexit /US risks loom

Very strong jobs data suggest that the Irish economy has turned into 2017 with substantial and broadly based forward momentum. These data both testify to the health of Irish economic conditions at present and suggest a notable counterweight to the potentially negative implications of UK and US policy developments on the outlook for activity in the coming year.

What makes today’s Employment figures for the fourth quarter of 2016 particularly impressive is the range of metrics that point towards robust conditions in the Irish jobs market at present; not only was the year on year pace of jobs growth in Q4 the strongest since the 3rd quarter of 2007 but numbers at work in all 14 economic sectoral categories and all 8 regional area were higher at the end of 2016 than a year earlier. Moreover, the growth in employment was entirely in full time jobs and the unemployment rate has now dropped below 7% for the first time since July 2008. As a result of these improvements, the labour force is now growing at a pace that hints at some increase in net inward migration of late.

As diagram 1 illustrates, Irish jobs growth picked up to a 3.3% rate year on year in late 2016, the fastest pace in more than nine years. This contrasts with a clear easing in the pace of jobs growth in both the UK (+1%) and US (+1.2%) at the end of last year. The Irish data are also notably stronger than the latest figures for the Euro area which show gains of 1.2% in the third quarter.   With the quarter on quarter pace of jobs growth in Ireland also running at an annualised rate of 3.3% in the final quarter, this suggests the current momentum of Irish jobs growth remains strong. 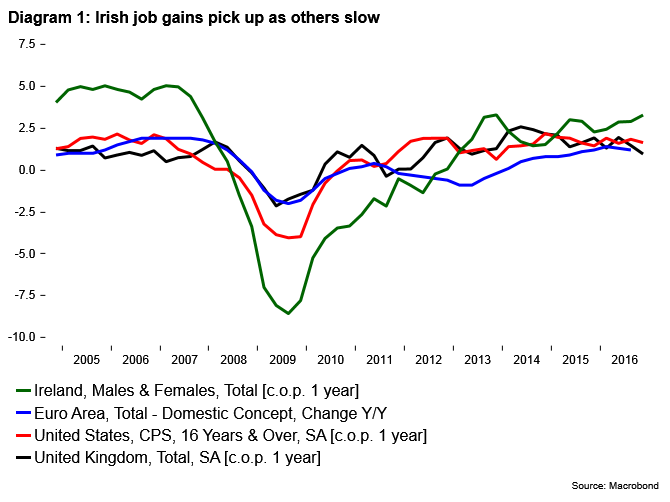 A rise in numbers at work of 65,100 between the final quarters of 2015 and 2016 comprised a rise in full time employment of 71,900 and a drop of 6,600 in part time employment. This hints at a maturing upturn as businesses become increasingly confident of sustained demand for their output and opt to scale up the hours of previously part time employees.

The sense of a recovery that is broadening as well as strengthening is suggested by year on year increases in all the fourteen activity sectors identified in the report.  Construction saw the sharpest increase (+11.6K) reflecting both its more recent turn as well as the relatively low base from which building activity is recovering.

It is noteworthy that in the final quarter of 2016 numbers at work in Ireland outside of the construction sector exceeded their pre-crisis peak. Gains in the past year were widely spread and suggest support from solid export activities as well as recovering domestic demand and a more supportive fiscal stance. Job increases in industry (+10.7k), professional, technical and scientific activities (+6.8K) and tourism related business (+4.9k), information and communication (+4.6k) as well as a range of public sector activities including Public Admin (+2.1K), Education (+2.6k) and Health (+3.6K) give a sense of a jobs market firing on all cylinders in terms of recruitment. (As in other countries, most indicators of Irish pay developments suggest a more temperate jobs climate).

A broadening of the recovery geographically is suggested by increases in employment in all planning areas for the third quarter in a row. Admittedly the pace of improvement varies widely by region but for the second successive quarter job growth in Dublin (+3.2%) was slightly below the national average.

Stronger and broader job gains have produced a marked reduction in Irish unemployment. The robust performance of the past quarter means that the monthly unemployment rate for January 2017 has been revised down to 6.8% (previously estimated at 7.1%). The drop in unemployment below 7% has come at a time when the labour force is again growing at a healthy pace (+1.2%) which we think hints at some pick–up in net inward migration (on a very crude basis we reckon that net inward migration is now running around +20k). In turn, the strength of job creation and increased inward migration are entirely consistent with the message from house price and rent indicators of rising pressure on inadequate capacity.

Today’s jobs data are very encouraging in a number of respects. At a time when, there is much confusion about the precise pace of Irish economic growth, they suggest a strong underlying momentum in activity as well as substantive evidence of ‘real’ underpinnings to the positive Irish recovery story.

In light of the continued strength of jobs growth in the final quarter (at a time when uncertainty might have been expected to weigh on Irish job creation as it seemingly did in both the UK and US,  today’s figure suggest a measure of upside risk to our forecast of average annual GDP growth for 2016 of 4%. We have decided to revise up our forecast of annual average job growth from 2% to 2.5% for 2017 and, accordingly, adjusted our estimate of the average unemployment rate for 2017 from 7% to 6.5% (allowing for some pick-up in labour force growth).

These revisions also emphasise an important counterweight to very real downside risks to the Irish economic outlook posed by Brexit and possibly unfavourable changes in US policymaking. The strength and spread of job creation of late implies the Irish economy has begun 2017 on a very strong trajectory.