Unemployment now below 10% and could edge below 9% by end-year.

Irish jobs data for the first three months of 2015 point towards a strong momentum in employment growth as the recovery in economic activity builds and broadens. An increasing shift to growth in fulltime jobs, broadly based gains in terms of the sectoral and geographic breakdowns and a drop in the unemployment rate below 10% all point towards a step-up in labour market conditions of late and suggest a clear improvement in the jobs market is now well established. As diagram 1 indicates, this improvement has been altogether more gradual than the deterioration it followed but the diagram also emphasises that the steady progress that is being made in in both employment and unemployment in what is still a challenging economic global economic environment. 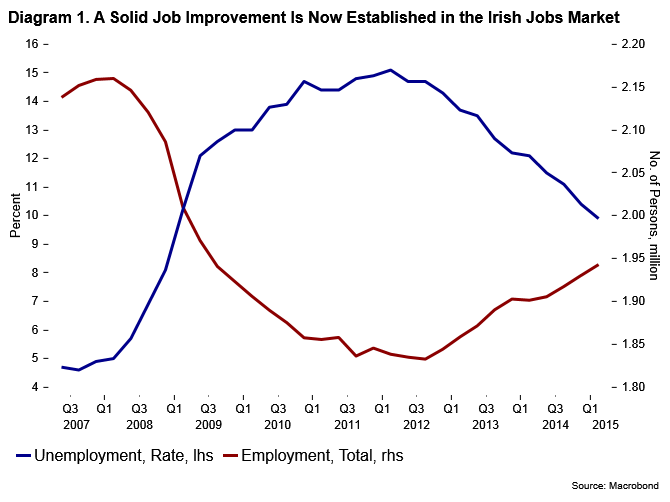 Numbers at work in the Irish economy were 12.5k higher (+0.6%) in the first quarter of 2015 than in the previous quarter and 41.3k higher than a year earlier (+2.2%). In turn, these data should further underpin expectations of another year of rapid GDP growth in 2015 as well as the sense that the Irish economy is now set on a strong and sustainable trajectory.  With annualised jobs growth now running close to 2.5%, this appears consistent with an overall economic growth rate in the region of 4%.

A broadly similar quarterly pace of job growth has now been recorded in six of the past eight quarters. However, the details suggest a progressive improvement in labour market conditions has occurred through this period. Since the final quarter of 2012, full-time employment has consistently grown faster than part time employment. In the past two quarters, part-time employment has fallen but this was more than offset by strong gains in full-time employment (+17.6K and +16.7k). This hints that Irish economy firms have adjusted employee numbers and hours worked in response to, rather than in anticipation of, stronger activity levels.

The sectoral breakdown of jobs growth in early 2015 shows strong increases in construction and industry. The former reflects the emerging upswing in building activity as price developments signal notable shortages in a number of segments. The latter likely stems from the improved competitive position of the Irish economy as well as solid demand in important trading partners such as the US and UK.

There was some decline in employment in some sectors focussed on the Irish consumer that may reflect the uneven nature of the turn in consumer spending and a cautious approach to hiring noted above. The first quarter also saw a surprisingly large drop in numbers at work in professional, scientific and technical activities (-6.4k) that is difficult to reconcile with the broad economic picture and may reflect some sampling or seasonal adjustment problems.

Today’s data show a quarterly drop in unemployment (-10k) that broadly matches the rise in employment (+12.5k). As a result, the seasonally adjusted unemployment rate fell to 9.9%, the first time it has been below 10% since the final three months of 2008. We previously felt the unemployment rate would drop close to 9% by end 2015. Today’s data suggest it might fall just under 9% by the end of this year.