Irish jobs data for the first quarter of 2021 give a strong sense of the continuing damage to the economy from the pandemic. Statistical revisions mean the decline in employment through 2020 and into early 2021 is now estimated to be larger than previously indicated.

These data also emphasise how widely economic circumstances now vary across sectors which, in turn, highlights the need for economic policy to remain significantly supportive overall but also to become more focussed on those areas at risk of large and lasting  difficulties.

Diagram 1 below shows that the jobs fallout from Covid-19 has been relatively large in Ireland compared to European norms. Relative to employment levels prevailing at end-2019, numbers at work in Ireland are about 2 percentage points weaker in early 2021 than the Euro area average or the UK. More worryingly, the turnaround from the Q2’ 20 low-point has been notably weaker in Ireland than elsewhere. 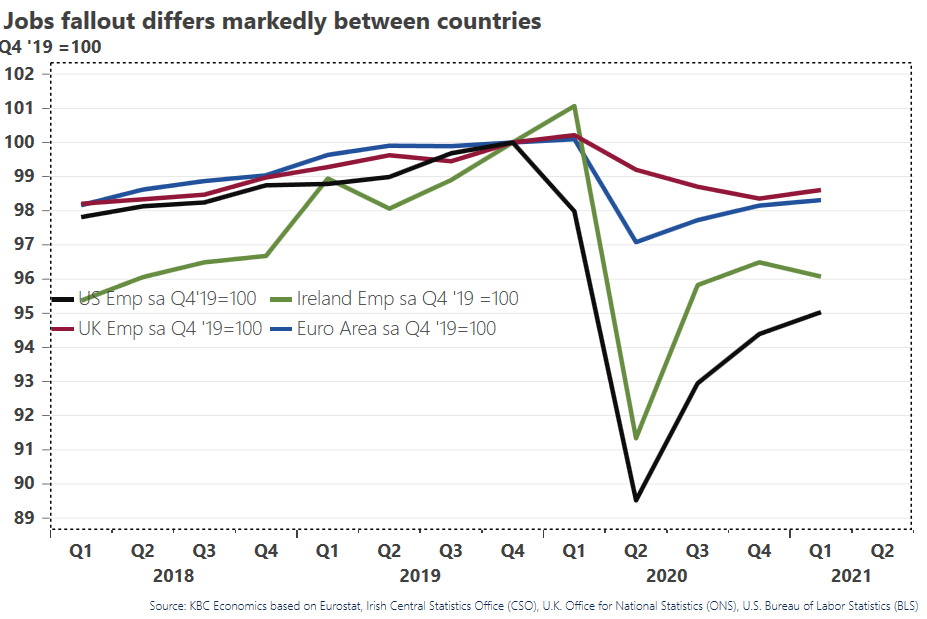 Numbers at work in Ireland were 5% lower  (116.6k fewer at work) in the first Q1 of 2021 than a year earlier. In contrast to an improving trend in many other economies, employment also dropped 0.4% between Q4 ’20 and Q1 ’21 likely reflecting the degree and duration of health related restrictions on economic activity.

Diagram 2 below shows the degree to which sectoral employment patterns have varied within the Irish economy. 8 out of 14 sectors have shown employment losses through the past year, 2 are effectively unchanged (showing marginal increases) and 4 show clear gains.

Not surprisingly,  Accommodation and food services fared worst, shedding 74k jobs in a 42% drop through the past year but Admin and support services which is down 33k jobs,  Construction down 28k, transport down 15k and the ‘catch-all’ other sectors which shed 35k jobs all registered double digit percentage declines in numbers at work in these areas.

In contrast, numbers working in ICT grew by 12k in the past year as did employment in Industry while Education posted an 11k rise in employment and other Public sector jobs increased by about 9k.  So, several sectors of the Irish economy have experienced solid or even strong employment conditions through what has been an extraordinarily difficult year for jobs overall.

The concentration of job losses in those sectors most directly affected by health-related restrictions on activity provides some encouragement that the gradual re-opening of the economy should produce a marked improvement in the employment picture later this year. In addition, the statistical revision entailing a weaker employment picture through the past year are concentrated in an adjusted definition to the ‘away from work’ category that may unwind progressively as the economy ‘normalises’.

However, both the slow pace of turnaround since the Q2 ’20 low-point, continuing shortfalls in activity in these areas and the particular characteristics of the affected sectors, with a significant number of smaller firms and a tendency towards lower paid/skilled employment, highlight the risk of material ‘scarring’ in the shape of a prolonged shortfall in employment prospects in these areas even as broader metrics of economic recovery build.

The potential second-round economic and social losses from a shortfall in supply in the weaved fabric of activity in tourism and hospitality sectors could also make for a much more unbalanced post-pandemic Irish economy. These considerations suggest the need for a staged move towards more targeted and possibly more enduring employment support measures in the upcoming Budget to re-boot activity and employment in the coming year. These are likely to require a range of both demand and supply side initiatives aimed at ensuring the maximum sustainable path for jobs  in these areas.

The weaker trend in employment of late allied to statistical revisions translates into a materially higher unemployment rate than previously indicated. For the first quarter of 2021, on the ILO definition (that should be regarded as a lower bound) Ireland’s unemployment rate is now put at 7.3% -previously provisionally estimated at 5.8%.  The upper bound as indicated by the Covid-adjusted rate (that includes although claiming the Pandemic Unemployment Payment)  which was previously estimated at 24.7% for the first quarter is now put at 26.6% for that period. A clear easing has occurred in the interim as restrictions on activity were lifted with the May figure now put at 21.9%. Moving this upper bound jobless number into single digit territory as quickly as possible should be the over-riding goal of economic policy in the near term.