Numbers at work were growing strongly in early 2020, and then…

Irish employment data released today give a strong sense of the dramatic turnaround in the jobs market that has occurred of late. These data emphasise the extreme nature of the deterioration as the collapse in numbers working and the related surge in numbers out of work. (Helpfully the Central Statistics Office has produced estimates of underlying figures as the official definition of joblessness requires that someone is actively looking for work. The analysis below focusses on these underlying measures).

Today’s data show that just 1.75 million people were working in the Irish economy at end-April (including those receiving a temporary wage subsidy), a drop of some 24% on a year earlier and some 600k fewer than the average of the first quarter. As we suggested previously (here), Irish employment is now at its lowest level in twenty years, a time when the population was about 1.2 million lower than it is today.

The diagram below emphasises that the scale of deterioration is markedly greater than that seen during the financial crisis. In a couple of months , numbers working have fallen by 236k more than the peak to trough fall between 2007 and 2012. 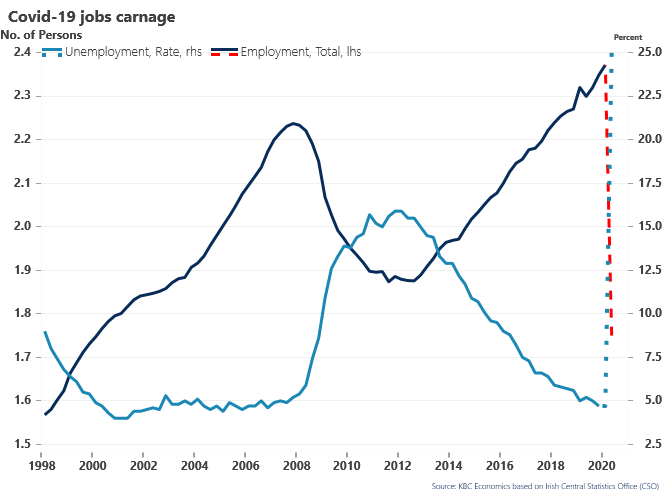 It should be noted that unlike circumstances in 2007/8, the fallout from the pandemic came out of a clears blue sky as far as the performance of the Irish economy is concerned. Numbers at work in the first quarter showed a 1.0% q/q gain (4% annualised) and were 2.2% higher than a year earlier (+51.5k jobs). So, it appears the Irish jobs market was building momentum when the Pandemic struck. This highlights the underlying health of the Irish economy and emphasises the need for policy to focus on restoring the economy to that path in so far as possible rather than letting a needed correction take its course.

The current collapse in the Irish jobs is extraordinary but far from unique at present. Minutes released yesterday from the US Federal Reserve’s late April policy meeting note; ‘With regard to the labor market, participants noted that incoming data confirmed that an extreme decline in employment was under way. ……Participants were concerned that temporary layoffs could become permanent, and that workers who lose employment could face a loss of job-specific skills or may become discouraged and exit the labor force. Participants were additionally concerned that employees who were on low incomes would be the most severely affected by job cuts because they were employed in the industries most affected by the response to the outbreak or because their jobs were not amenable to being carried out remotely

In the same vein, the ‘flash’ Purchasing Managers’ report for the Euro area for May released this morning noted ‘ Jobs consequently continued to be cut at a rate unprecedented prior to the COVID-19 lockdowns, the rate of staff cuts easing only modestly compared to April’s record. Similar rates of job shedding were seen in services and manufacturing, as firms in both sectors sought to cut capacity in line with weaker demand.  Furlough schemes were often cited as having reduced the near-term need to reduce staffing numbers, but longer-term job retention depends on the speed at which order books will refill.’

The significance of these commentaries on conditions in other jobs markets lies in the nature of concerns that temporary health-related ‘lockdowns’ might produce large and lasting weakness in employment are broadly based. The more important message from the Fed comment is a strong commitment to act aggressively to counter such risks. As the diagram below might suggest, very different policy stances in the wake of the financial crisis contributed to very different speeds of recovery in jobs markets. We continue to emphasise the significant if not surprising impact of austerity on employment outcomes. 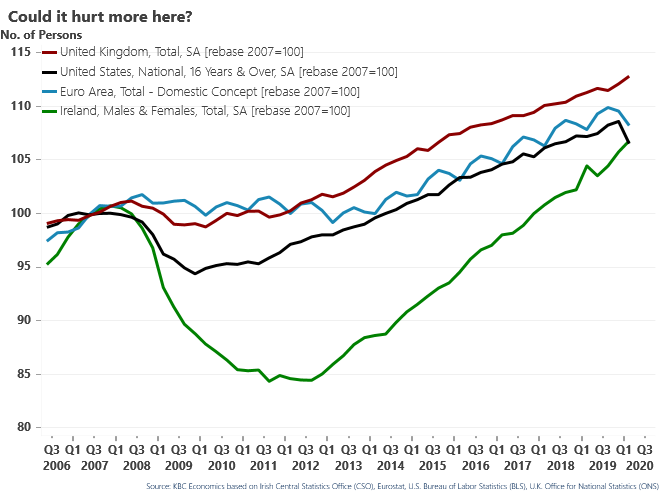 It should also be emphasised that while the enormous scale of economic fallout from the pandemic makes if first and foremost a ‘macro’ problem, the distribution of effects is not felt equally. Research from the CBI ( The Initial Labour Market Impact of COVID-19 Stephen Byrne, Dermot Coates, Enda Keenan & Tara McIndoe-Calder Vol 2020, No. 4) suggests that, among other characteristics, adverse effects are likely to be felt disproportionately by those who are under 35, in current employment less than a year and less likely to have tertiary education.

The graph below, which shows age related employment trends since the financial crisis, might be interpreted as suggesting that age-related scarring was already a problematic characteristic of the Irish jobs market before the pandemic struck. If exclusion from employment in coming quarters translates into hysteresis effects, this could limit the Irish economy’s future growth potential (as well as threatening the broader social fabric?), and put a persistently elevated benefits burden on the public purse. 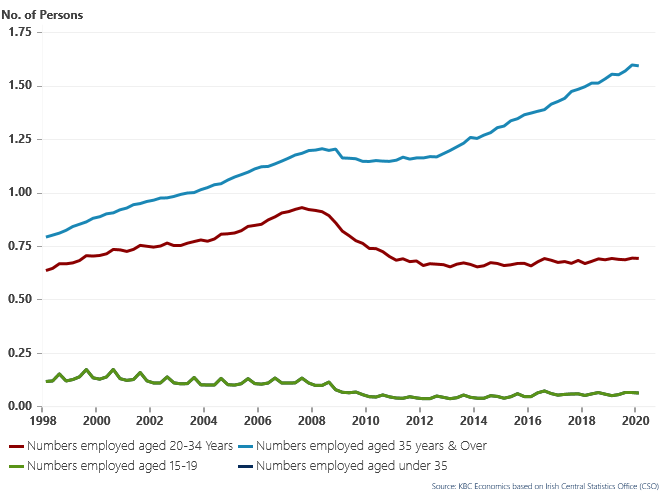 For many reasons, todays’ jobs data underline the importance that, at least the next year or two, Irish fiscal policy is primarily focussed on a range of time bounded ‘return and retain’ employment measures that incentivise employers and employees to work as well a programme that brings forward spending on infrastructure.