• Numbers at work set to rise further in coming year.

• However, job growth concentrated in over 35s. So, migration still an issue.

Irish jobs growth remained strong in the final quarter of 2014. With employment now up in each of the past five quarters, these numbers seem to confirm that an economic recovery has become established. The jobs data also suggest this upturn has considerable momentum. Although the three month increase in employment was slightly less than in the previous quarter (+14.6k against +20.8k), this still represents an exceptionally fast pace of growth (+3.9% annualised).

On average, employment rose by 43k, or 2.4%, in 2013 relative to 2012. This is markedly higher than would be suggested by an estimated GDP growth rate of just 0.3% for last year. We remain of the view that the outturn for GDP clearly understates the scale of improvement in Irish economic conditions. To a notably smaller degree, the jobs data may overstate the scale of upswing in the past year.

Most forecasts envisage job growth will continue albeit at a slightly slower pace through the coming year. However, signs of improvement in key trading partners such as the UK in particular and the prospect of some increase in domestic spending argue against any dramatic deceleration. We now expect an average increase in employment of around 2% in 2014. In turn, this should imply a rise of about 2.3% in GDP as largely technical differences in the messages coming from key measures of Irish economic conditions gradually fade.

The rise in employment through 2013 contributed significantly to a further decline in unemployment. The number of jobless fell by 11k in the final quarter of 2013 and by 41k compared to a year earlier. This caused the unemployment rate to fall to 12.1%. With employment and the labour force growing again, this drop appears to be driven primarily by an improving jobs market rather than any increase in net emigration.

The jobs data also show a continuing marked age split in employment trends. As table 1 indicates, job gains were concentrated among the over 35s. There were net job losses of 12k in the 25-34 age group which coincided with a fall of 24.7k in labour force participation among this age group. This pattern may owe something to small movements into education or out of the workforce for various other reasons. There is also a significant demographic Irish Jobs Data Confirm Recovery Underway27 February 2014 3 shrinkage in this age group because of a lower birth rate through the ‘80s. However, the key driver of the decline in numbers in this age group is undoubtedly ongoing emigration. On the other hand, today’s data also show the estimated population aged over 15 held broadly steady in the past twelve months. So, it may be that net migration has peaked. 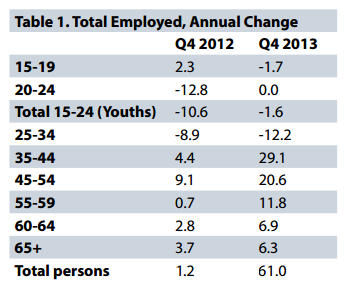 As is the case elsewhere, Irish jobs data are produced by survey. A new sample has been incrementally introduced through the past year and the CSO notes that this ‘can lead to some variability in estimates, particularly at more detailed levels and some caution is warranted in the interpretation of trends over the period of its introduction’.  Our judgement is that the aggregate numbers are not materially affected— at the margin, it might be argued that the exceptional scale of job gains recorded for the past year might owe something to a correction of an earlier overstatement of job losses. However, the broad message of a decent recovery in employment is consistent with a wide range of survey evidence.  We would tend to place less emphasis on the sectoral breakdown, particularly the seasonally adjusted changes between the third and fourth quarter where the persistence of strong job growth in agriculture seems surprising.