Details hint at some negative Sterling impact on job creation

Irish jobs data for the second quarter of 2017 show a significant softening in the pace of growth. However, as diagram 1 below indicates, the pace of increase in employment in the Irish economy remains notably faster than elsewhere. We now expect jobs growth for the full year to average a healthy 2.5%, about a percentage point faster than jobs growth is at present in either the US or the Euro area and about 1.5 percentage points faster than in the UK. 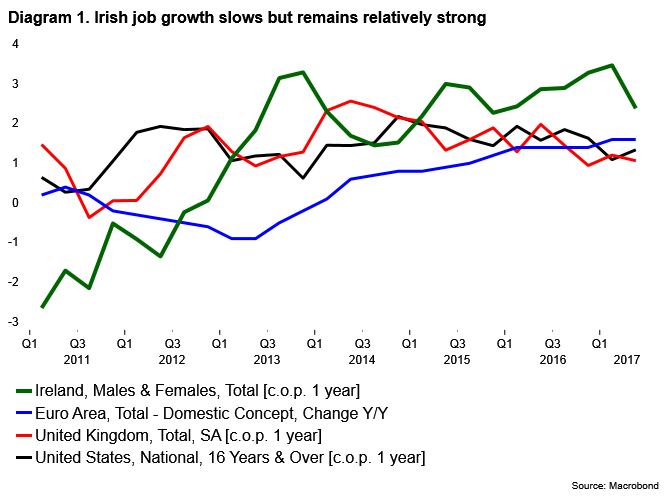 Numbers at work in the Irish economy were 2.4% higher in the second quarter of 2017 than a year earlier, translating into an additional 48,100 jobs. As the first quarter saw an annual increase of 3.5%, today’s data are slightly weaker than expected. The reported quarterly increase of 0.2% (down from a 0.7% previously) is disappointing and somewhat at odds with the ongoing strength in areas such as retailing and the property market.

The softer pace of jobs growth in Q2 may reflect an element of caution in relation to new hiring (that was hinted at in the recent KBC Bank/Chartered Accountants Ireland Business Sentiment Survey). This could reflect continuing uncertainty about the potential implications of Brexit and/or tax policy changes in the US as well as the more immediate challenges posed by the weakening of Sterling against the Euro.

The Border region continues to be the only geographic area reporting a drop in employment on a year earlier although the decline is marginal (a decline of 200 jobs). However, at the sectoral level, there was a notable 3.3k quarterly drop in employment in the accommodation and food services sector that may be Brexit or, more specifically, exchange rate related. Similarly,  a 3.1k quarterly fall in jobs in industry is likely partly a correction following a gain of 6.5k in the previous quarter in this volatile area but it could also owe something to a less competitive  exchange rate, particularly, against Sterling.

Overall, we think the slowdown in jobs growth in Q2 is broadly consistent with our expectation of a somewhat slower growth rate in 2017 than in 2016both in terms of economic activity overall and in terms of employment but the broad swathe of economic indicators still point to significant forward momentum. So, we don’t see today’s release as a pointer towards notably softer conditions in the Irish economy.

Equally, we don’t see the slowdown in jobs growth in the second quarter as indicative of overheating pressures in the Irish economy that might translate into constraint on new hiring. In conjunction with other labour market indicators, today’s data suggest job growth remains on a solid and sustainable trend.

In marked contrast to current trends in the US, Euro area and UK, today’s pace of jobs growth in Ireland remains well in excess of the current rate of wage growth. This suggests strong labour demand is creating ample additional supply rather than broadly based wage pressures.

In the same vein, Ireland’s job vacancy rate in the second quarter of 2017 at 1.1% is well below the EU average of 2.0% (and the ninth lowest of the EU-28). This implies that even if there are sectoral difficulties, at the ‘macro’ level there is little evidence of significant overheating pressures in the Irish labour market at present.

Ongoing gains in employment are producing a continuing drop in unemployment, with today’s data implying the monthly figure for August is revised slightly lower to 6.1% (from 6.3% previously) and notably down on the August 2016 figure of 7.9%.

Sustained momentum in jobs growth and the increased prominence of domestic spending in broadening the reach of the upswing has meant that in the past year long-term joblessness has fallen somewhat faster than short-term unemployment to reach 3.1% of the labour force in Q2 2017.

Probably the most surprising aspect of today’s data is that improving job market conditions don’t appear to have led to a clear increase in the labour force. Instead, the second quarter data seem to show a marked and surprising step-up in people who described themselves as outside the labour force.

In the past, as diagram 2 shows, this classification tends to exhibit an understandable and strongly negative correlation with economic conditions. Our sense is there could be sampling or other statistical problems at play here and we would expect the participation rate to show some improvement in the future.

More generally, the gradually increasing pace of growth in the population aged over 15, seen in diagram 2, implies a pick-up in net inward migration of late and together with the ongoing increase in employment this implies that a strong and smoothly functioning labour market is likely to add to pressures on the housing market. 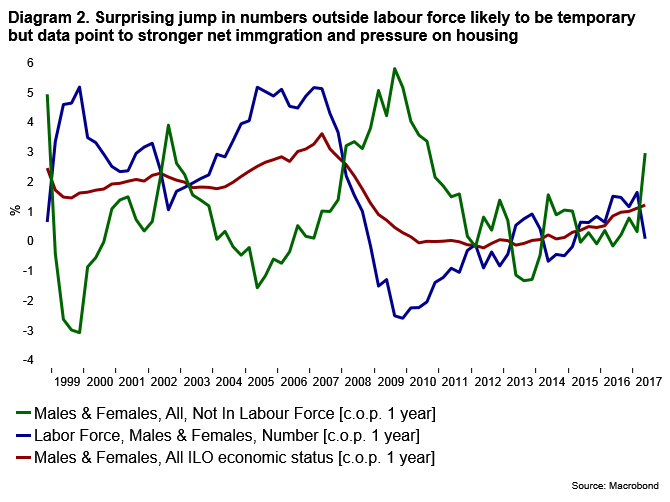