Sharp increases in many high-profile prices

Irish inflation is now set on sharply rising trend reflected in the August reading of 2.8%- the fastest increase in nearly ten years (November 2011 +2.9%). Having remained very subdued for a long time inflation in Ireland and elsewhere, growing price pressures have now emerged as an increasingly important economic (and social) issue.

Beyond the immediate strain placed on spending power, there is the likely knock-on impact on wage bargaining and the implications in terms of adjustments to social welfare rates and tax bands in the upcoming Budget.

Today’s official inflation data mirror the findings of a special question in the KBC Bank August consumer sentiment survey that found 58% of consumers had felt significant price pressures impacting their living costs in recent months. The sense of weakening spending power may intensify as Inflation is likely to rise further in the near term and, with higher heating costs eating into spending power, a notable rise in living costs could become a notably more important feature of the economic climate in coming months

The diagram below shows the standard year-on-year figure and gives some sense of the strengthening momentum in price pressures in recent months by comparing it with various measures of the short term trend- as indicated by annualised increases over shorter time periods. As this suggests, a ‘noisy and nasty’ upward trend in Irish consumer price inflation is now well established and the short term dynamics imply pressures are building faster and further. 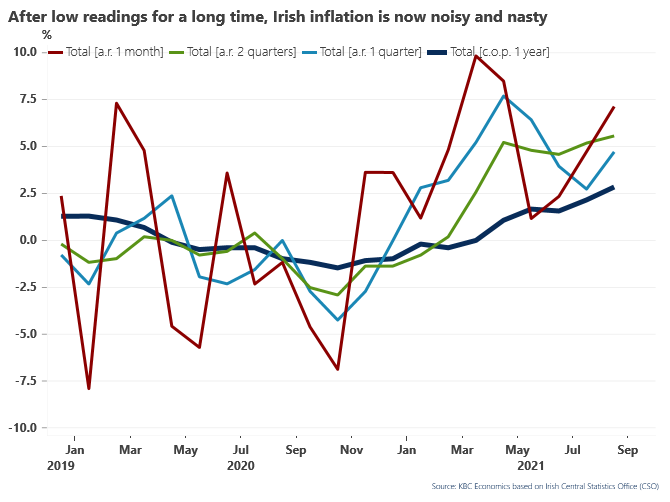 The nature and breadth of price increases evident in the August data also mean that many consumers may feel their cost of living is rising much faster than the headline inflation rate suggests. A key issue is that prices are rising rapidly in high visibility, high importance areas as the following examples illustrate;

As is the case globally, it is generally envisaged that Irish inflation should moderate as we go through 2022, However, In the US and elsewhere, there is increasing concern that the recent uptrend may not will reverse as fast or as far as previously thought. The debate between economists on this issue has generated a lot more heat than light and, in some instances, has descended into petty name-calling. Although I would be hopeful that we will see a marked easing of current pressures as next year develops, the reality is that a once-in-a-generation event like the pandemic may lead to unexpected outcomes that most economic models will struggle to capture. My concern, when I look at price movements like those listed above is that companies and consumers transition to a view of the world where they try and get their inflation 'retaliation' in first.

The critical issue for the Irish economy is to ensure a damaging wage-price spiral is avoided. That may require some important tweaks to decisions in relation to tax bands and social welfare rates in the upcoming budget. Obviously that implies increasing welfare rates a little bit more than they would otherwise rise.

In relation to tax bands, some economists might favour higher taxation to dampen spending power. My view is that by indexing bands to higher inflation. you should reduce the pressure for notably larger wage increases. That would continue the sort of social contract activated by the crisis and given the greater than expected resilience of the public finances would mean any costs fall on the balance sheet of the Government that is stronger than the bulk of domestic facing companies. Of course, the Exchequer would also see some uptick in tax revenues from the resultant spending.