Irish House Prices Remain On Positive Path In May

Near term momentum unlikely to be significantly altered by ‘Brexit’ concerns

In longer term, some Brexit impact is likely but a range of factors points to modest price increases being sustained

Irish house prices showed a further modest monthly rise in May, suggesting a trend towards a very gradual easing in the annual rate of property price inflation is continuing. The trend seen through recent months seems broadly consistent with our expectation that by the end of 2016, house prices will be in or around 5% higher than a year earlier.

A range of influences is operating in contrasting directions on Irish house prices at present. The broad trend in economic activity and employment remains solidly supportive while Central Bank borrowing constraints and limited housing supply are pulling in opposing directions. Although indicators have pointed towards an easing in property price inflation and a more troubling decline in transaction levels for some time, as diagram 1 suggests, recent mortgage approvals data tentatively suggest the prospect of some improvement in activity and a somewhat stronger trend in prices through the summer months. 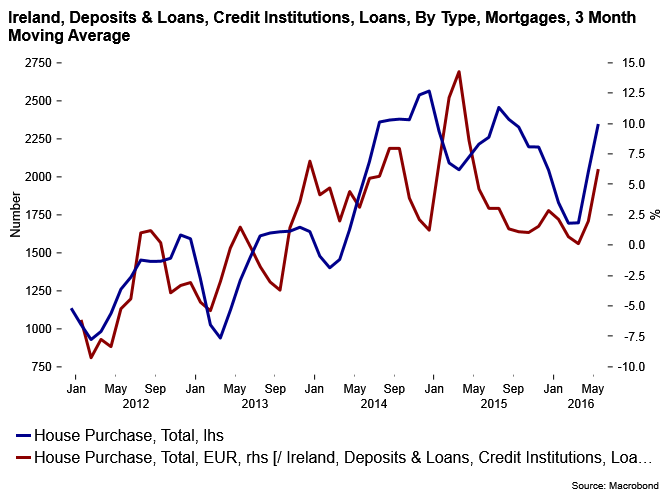 Irish house prices are now showing reasonably solid positive momentum that is entirely consistent with the broader health of the economy at present. In the near term, heightened uncertainty regarding Brexit’ may exert some dampening influence on demand but in the absence of a clearer picture on the precise nature and extent of the impact on the Irish economy, we would not expect a marked change in the current trend which is one of a gradual easing in the annual rate of house price inflation.

Looking further forward, the lack of clarity both in relation to the precise path and timing of the UK’s departure from the EU might take, as well the economic framework that will govern its new relations with the EU, means it isn’t possible to make any informed forecast of how Irish property prices might be affected in the longer term.

While most studies envisage a significantly adverse impact on Irish GDP from Brexit, the magnitudes mentioned (amounting to around a paring back of around a couple of percentage points phased over a number of years in all but apocalyptic scenarios) suggest Irish economic growth should remain fairly solid through the next couple of years.

With the possibility of some additional immigration-related demand for housing and the prospect of borrowing costs remaining lower for longer in the Euro area, there are likely to be some countervailing influences to the Brexit-related impact of a slower of GDP growth on the Irish housing market. As a result, the persistence of the longstanding relationship between Irish economic conditions and house prices (see diagram 2 below) might be expected to sustain a modestly increasing trend in Irish property prices. 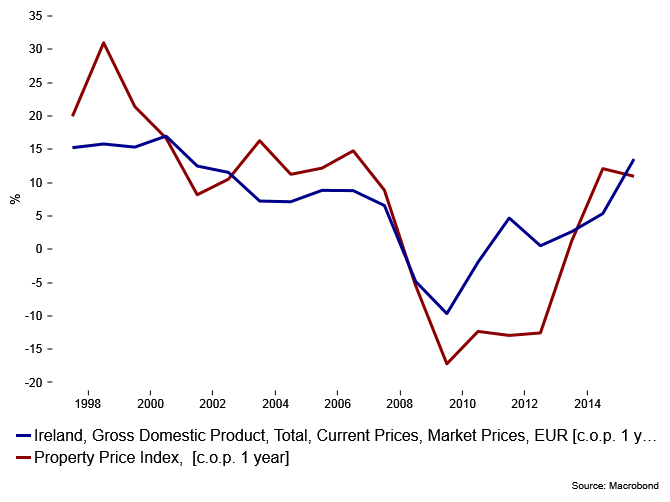