No sign of flagging momentum in broadly based increase

Irish house prices increased by 13% in the twelve months to April, the fastest pace since May 2015 and continuing the trend of the rapid pace of property price growth seen through the past four years. The pick-up in the annual rate was centred on Dublin where growth accelerated from 11.7% y/y in March to 12.5% in April (to the fastest pace in three years) but the buoyancy in prices remains broadly based.

The further pick-up in Irish property price inflation is likely to fuel talk of ‘overheating’ and price increases of this magnitude certainly raise risks in this regard but it is worth noting that in terms of housing or lending, current levels of activity remain some distance below what might be considered normal.

The issue is not that property sales or lending or lending levels are too ‘hot’ at present, it is that serious logjams in supply coupled with pent-up demand mean the journey to sustainable outcomes could be problematic. Because we remain below what might be considered healthy levels of construction and lending, the focus should not be on stopping activity but on ‘calming’ the pace of increase.

The pace of increase in Irish property prices of late likely means it remains the fastest in the EU. The latest Eurostat release show Irish housing prices rising more than twice as fast as the average increase across the EU which stood at 4.5% in late 2017. In part, this reflects the broader strength of the Irish economy (with Irish jobs growth also more than twice as fast as the EU average in late 2017 (3.1% v 1.4%). The importance of economic momentum to property price inflation is seen in a clear contrast between today's Irish data and UK figures also released today that show the increase in British house prices slowed to 3.9% y/y in April, the slowest pace in 13 months.

The rapid increase in Irish property prices also significantly reflects a serious shortfall in supply. Some context on the scale of this shortfall is provided by diagram 1 below which draws on Eurostat data to show that Irish residential construction as a share of overall economic activity falls well short of the EU average. The 2017 outturn at just below 2.5% of GDP was the third lowest in the EU.

On the basis of demographic factors and historic norms, Ireland’s ‘equilibrium’ share of residential construction is likely to lie somewhat above the current EU average of around 4% of GDP (even allowing for some multinational-related distortions to the current level of Irish GDP). 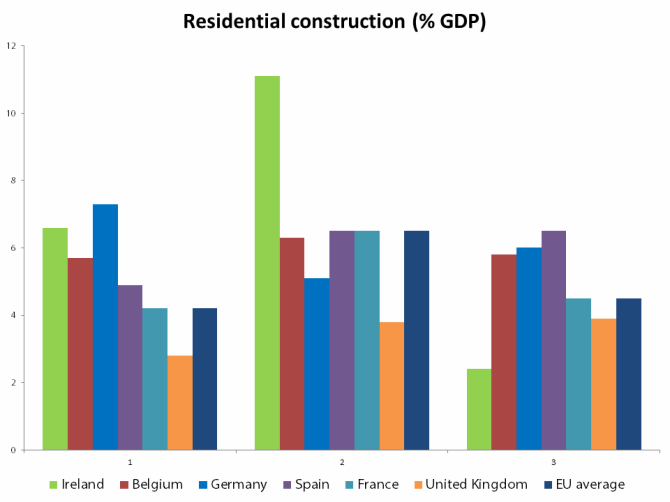 The prospect that the Irish property market might still have some distance to travel to arrive at what might be considered ‘normal conditions’ is also suggested by lending data. Recent Central Bank estimates imply the value of residential property assets held by Irish households were valued in the region of €500bn at the end of 2017. On conservative estimates, it might be suggested that healthy turnover in the Irish residential property market would be at least 3% of the overall stock. Assuming some 70-75% of such transactions would be mortgage funded and taking account both of LTV values and non-purchase related lending would imply ‘normal’ levels of lending in 2017 could have been in the region of €9-9.5bn rather than the actual outturn of €7.6bn. As the diagram below illustrates, some further 'catch-up' in lending could be warranted. 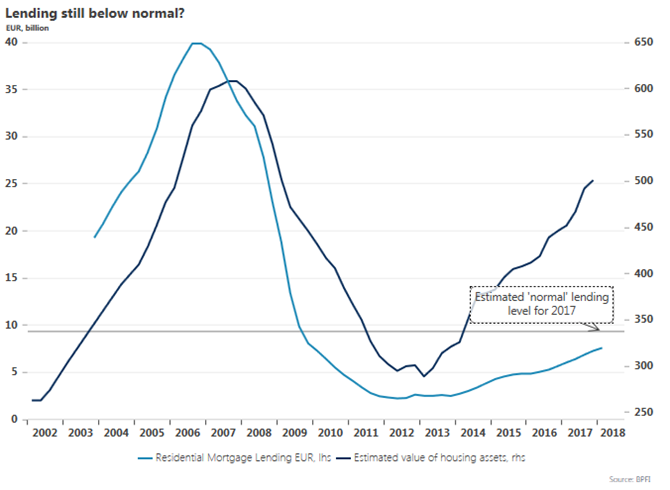 The sense that Irish housing market activity whether measured by the scale of construction or the volume of lending lies some significant distance below what might be considered appropriate to Irish economic conditions implies that we shouldn’t think of current problems in terms of common or garden ‘overheating’. Instead the key issue is to assess how to travel safely from current conditions to some higher level of sustainable level of output and lending. The faster the pace of journey, the greater the risks in this regard  that the mix between much needed increases in the volume of construction and housing transactions on one hand and price inflation on the other is unfavourable.