12% increase in June slowest since January

… but supply increasing and demand growth may have peaked

Prices outside Dublin rising at fastest pace on record

Irish house price inflation edged lower for a second month in June. Residential property prices were 12% higher than in June 2017 compared to an annual increase of 12.4% reported for May and a 13.3% increase reported in April which was the fastest pace reported in the past three years. The June increase is the slowest rise since an 11.8% gain in January 2018.

It remains the case that new housing supply is falling well short of levels needed to meet normal demand while demand at present is still boosted by would-be purchasers who were unable to buy through the past seven or eight years. This imbalance would continue to point to ongoing increases in Irish residential property prices.

However, new supply does seem to be increasing at an accelerating pace while demand growth is increasingly affected by affordability constraints and pent-up demand may have peaked. So, at the margin, a reducing gap between demand and supply may be limiting the pace of price increase of late. To the extent this continues, Irish property price inflation should move towards a more sustainable pace. However, history suggests this may not be a short or smooth process.

A sense of the underlying trend in Irish house price inflation of late is suggested by the annualised increase over the past three months (which converts monthly changes to an annual rate).  On this basis, the recent trend in prices remains quite robust.  Indeed, the three month annualised pace of property price inflation nationwide actually picked up marginally in June to 11.3%, its fastest pace since last October (see light green line in diagram) even as the year on year increase in prices has eased (dark green line in diagram). 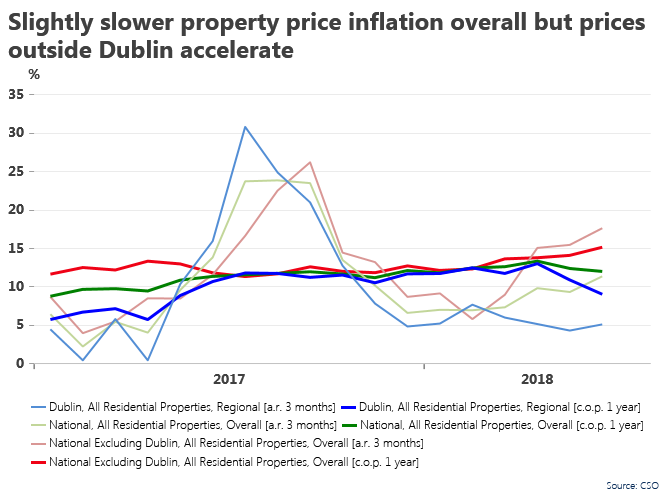 A notable feature of the underlying trend of late (as suggested by the annualised increase metric) is the sharp divergence between the pace of growth in property prices in Dublin and elsewhere as a softening trend in Dublin prices has been offset by faster increases in the rest of Ireland.

As the diagram indicates, prices outside Dublin have continued to accelerateand the trend gain (as measured by the annualised increase) at 17.6% in June outpaced the ‘official’ year on year increase in June of 15.2% as it has for the past three months. Moreover, the 15.2% increase in property prices in the rest of Ireland in the year to June matches a similar gain in June 2015 as the fastest increase since this series began in 2006.

The 9% year on year increase in Dublin property prices is the slowest rise since April 2017 but as the annualised data show, the trend in prices in the capital has been comparatively soft since the end of last year. Again, however, the June data show a slight uptick in the annualised data implying, we are seeing a gradual adjustment in price inflation rather than a marked cooling in market conditions.

The slower pace of property price inflation in Dublin of late owes something to affordability constraints as CBI lending limits would be expected to bite more forcefully in view of notably higher prices in the capital. However, this is not the only factor as purchases by household buyers increased faster in Dublin in the first six months (+6.3%) than in the rest of Ireland (+2%) in the first six months and there has also been a somewhat faster increase in new housing completions in the capital than elsewhere (admittedly off a low base) through most of the past twelve months.

These signs of improving supply in Dublin coupled with borrowing limits may be tempering price expectations whereas the ‘right sort’ of new supply may be less plentiful in areas of high demand outside the capital. As a result, June saw a 22.3% year on year increase in the price of house in the mid-west and a 17.85 increase in house prices in the west. 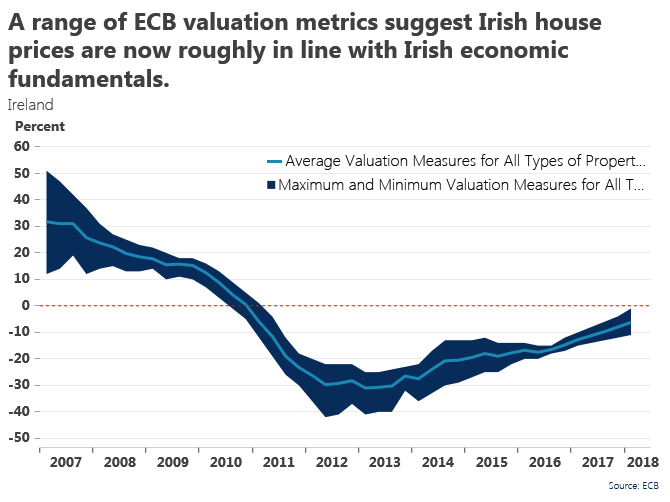 The ECB use a variety of approaches and estimated on the basis of the average of those results that  Irish house prices were about 6% below the levels suggested by relevant Irish economic influences in the first quarter of 2018.

However, the ECB analysis would also suggest that Irish property price inflation will need to head into mid-single digit territory before long for this to continue to be the case.