Irish house price inflation softer in September but will we see a Brexit bump or a Brexit bounce into 2019?

Brexit developments likely to alter momentum of market into 2019

Irish residential property price data for September show a further easing in the annual rate of house price inflation to 8.2% from an upwardly revised 8.9% in August (initially estimated at 8.6%). The September increase is the lowest since October 2016 (+7.5%) and represents a significant moderation from the 13.3% pace seen in April which was the fastest in 35 months.

Overall, the September house price data suggests the continuation of a trend easing in house price inflation towards a more sustainable pace. How bumpy further progress in this regard may be in coming months could be significantly influenced by Brexit developments.

Our sense is that the recent moderation in Irish property price inflation is largely driven by sector specific developments in the shape of improving supply and somewhat slower growth in demand rather than a changing ‘macro’ environment. As the September price data reflect sales agreed several months earlier, we don’t think they capture any notable impact from increased fears about a ‘no deal’ Brexit. This is in marked contrast to the impact such concerns have had on notably weaker consumer and business sentiment indicators of late.

Consequently, we think different factors are driving the recent slowing in property price inflation and the even more recent softening in consumer confidence sentiment readings shown in diagram 1 below. However, we would expect this divergence to lessen into 2019. The question is whether this will be because of an improving trend in sentiment or a softer trend in property prices. 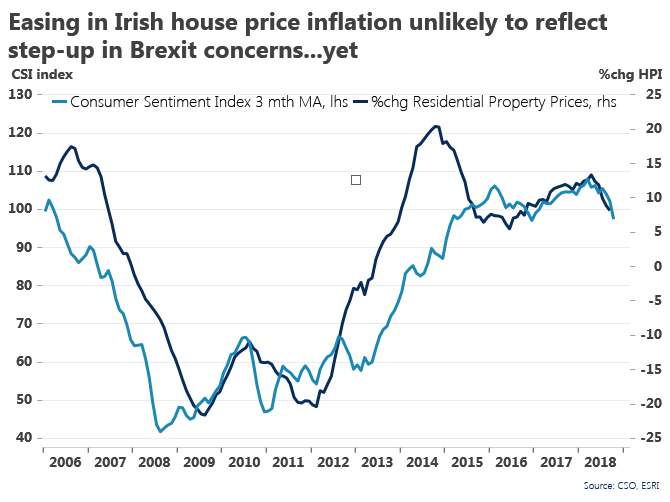 At the margin, there is some risk that increased risk aversion, prompted by growing concerns about the UK crashing out of the EU in early 2019, could weigh on property prices and transaction volumes in coming months. If the UK leaves the EU without a deal or transition period, Irish economic prospects would alter materially.

The unprecedented nature of a ‘no deal’ Brexit makes quantifying the likely short term effects on growth highly speculative. Most analysis to date has focussed on the longer term impact and envisages adverse effects of around 3 to 4% on GDP. Much of this would be front loaded in the case of a disorderly Brexit. Given current momentum and the possibility of offsetting actions at national and EU level, we think Irish GDP growth in 2019 would still be positive but possibly only marginally so—implying a marked loss of economic momentum—in the event of a ‘no deal’ Brexit.

In the absence of developments that make a disorderly Brexit inevitable and imminent, our sense is that any adverse Brexit related effects will be modest. Indeed, if expectations of a ’soft and smooth’ Brexit become re-established, it is possible that renewed optimism about Irish economic prospects could see a slight ‘Brexit bounce’ in Irish property prices in the first half of 2019.

The 0.7% monthly increase in property prices in September suggests momentum in the Irish property market remains positive but some further modest easing in house price inflation may occur between now and end yearreflecting ongoing improvements in supply and some moderation in the pace of demand growth reflecting both affordability constraints and, at the margin, some dampening impact from Brexit related uncertainty. These factors might be expected to leave prices about 7% higher at end 2018 than a year earlier.

It remains the case that homebuyer demand is greater than current supply. However, movements in both have been dramatic in recent years and the gap between the two is narrowing. New construction was negligible five years ago but, as diagram 2 below illustrates, the rate of increase in homebuilding has picked up markedly while mortgage demand growth has eased. As a result, new building growth has outpaced purchase demand for the past three years. The cumulative impact of notably improving, albeit still limited supply, and affordability constraints on demand growth is now translating into slower Irish house price inflation.

Although new housing completions are likely to be around 18-19k in 2018 and still well below the estimated 35k builds needed to balance demand and supply, this represents an increase of about 28% relative to the 2017 outturn and, as such, represents a material reduction in the supply shortfall, particularly in the context of the volume of purchase mortgage drawdowns increasing at an 8% pace in Q3 2018. In these circumstances, it might be expected that the pace of Irish property price inflation would moderate further into 2019 in the absence of any major Brexit or other shocks to the Irish economy. 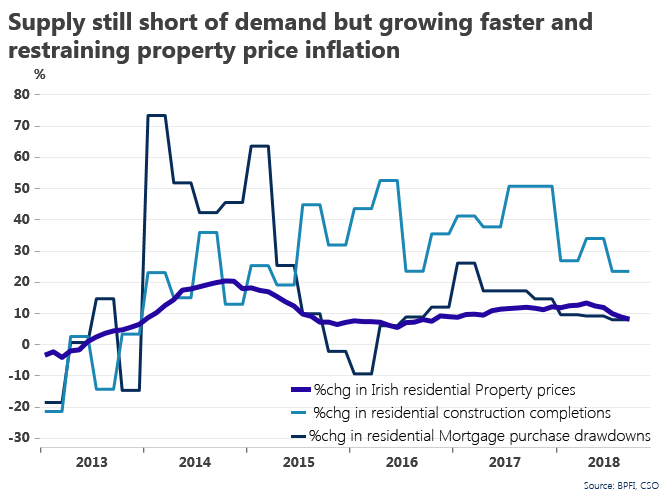