Property price growth now below increase in average earnings (+3.4%) and may be moving on to more sustainable path

Irish house price inflation edged lower for the thirteenth month in a row in May. While the 2.8% rise in Irish residential property prices in the year to May is only marginally less than the 3.0% rise reported for April (revised down from the initial estimate of+3.1%), it means that house prices are now rising at the slowest pace in nearly six years (July 2013;+2.5%).

In contrast to the recent trend, Dublin house prices strengthened marginally in May. The 0.8% month on month gain was the first monthly gain since October 2018. It resulted in the year on year change increasing fractionally from +0.5% to 0.6%, the first improvement in the annual change since April 2018.

The marginal improvement in May suggests we are seeing a softening rather than a slump in Dublin property prices at present. Across the rest of the country, we are also now seeing notably more modest price trends than those of recent years with the annual rate of increase easing further to 5.1% against a revised 5.4% in April (previously estimated at 5.6%).

So, there has been a clear shift in the trajectory of Irish housing prices towards a broadly stable and ultimately more sustainable path through the past twelve months. Importantly, Irish house prices are now rising in line with weekly average earnings growth (+3.4% y/y in Q1 2019).

The softer trend in Irish house prices of late reflects a range of factors including increased supply, concerns around Brexit and, likely of most importance recently, affordability constraints.

We noted last month (see here) that Dublin House prices appear to have reached ‘peak affordability’ at a median price that has remained just over nine times average earnings since mid-2017. A similar constraint is likely to increasingly restrict price growth across the rest of the country where the price earnings ratio has been just over 6 for the past two years.

While the level of Dublin house prices is now around nine times average earnings, the chart below indicates that the cumulative increase in Dublin property prices has also been around nine times the increase in average earnings since the first quarter of 2012. To purchase a property in Dublin, first time buyers have needed earnings that were higher and increased faster than the national average.

Data from Banking and Payments Federation Ireland show that, in early 2012, the median first time property buyer in Dublin had earnings that were 1.46 times the national average. In the first quarter of 2019 Dublin FTB earnings were 2.07 times the national average. This has meant that an ever decreasing number of prospective homebuyers have been able to afford to purchase property in the capital.

As the chart below indicates, affordability constraints are less intense outside the capital but may be having some restraining impact on prices as seen in the moderation of price growth from a three year peak of 15.2% in June 2018 to 5.1% in May 2019. 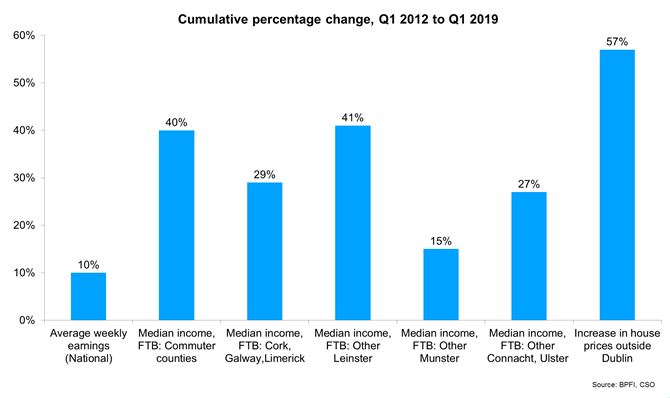 Our sense is that the recent softness in the housing market is amplified by expectations of further increases in supply. In the past, the ‘flow’ of Irish homebuyer demand has been heavily influenced by perceptions as to whether supply would become scarcer or more plentiful.

At the margin, however, demand considerations may have become more important factors of late. Uncertainty about Brexit and the binding influence of macro-prudential borrowing limits are likely clear and present constraints on demand.  It should be noted that May property price data reflect transactions undertaken in the first couple of months of the year when concerns about the UK crashing out of the EU without a deal became elevated.

Uncertainty and affordability issues have diminished the pool of purchasers able and willing to afford to buy a home of late. Some preliminary regression analysis we have undertaken suggests that both consumer sentiment and the macro-prudential regime have substantive and statistically significant impacts on the trajectory of Irish house prices.

The message from recent house price data is that these factors, in tandem with broader affordability and supply cost issues, mean that there is no automatic tendency for the Irish housing market to move automatically towards an equilibrium that delivers the assumed ‘normal’ housing output of 35,000 new completions per annum.

The broad macroeconomic environment remains supportive of the Irish housing market. Growth in employment and average earnings is healthy, borrowing costs set to remain low for some significant time and (on ECB metrics) Irish property prices not out of line with broader economic circumstances. In addition, mortgage approvals data have shown some improvement of late.

In such circumstances, it might be expected that house prices would develop broadly in line with trends in average earnings and employment. That said, recent evidence suggests the trajectory for prices and housing output may be notably less strong but markedly bumpier than that seen through the past five years.