...Blockage in supply and Bubble in demand are aggravating influences at present.

So, risks in policy interventions that go too far too fast

Policy should seek to boost supply expectations and ‘calm’ demand

Irish house price inflation accelerated for the ninth month in a row reaching 5.5% y/y in May following an upwardly revised 4.6% outturn for April (previously+4.4%). The May reading represents the fastest increase in two and a half years (December 2018 +6.3%). With strong momentum in monthly changes at present, the annual rate of increase in Irish house prices could continue to move higher through the summer. As the diagram below illustrates, Ireland is far from unique in relation to accelerating increases in property prices of late. 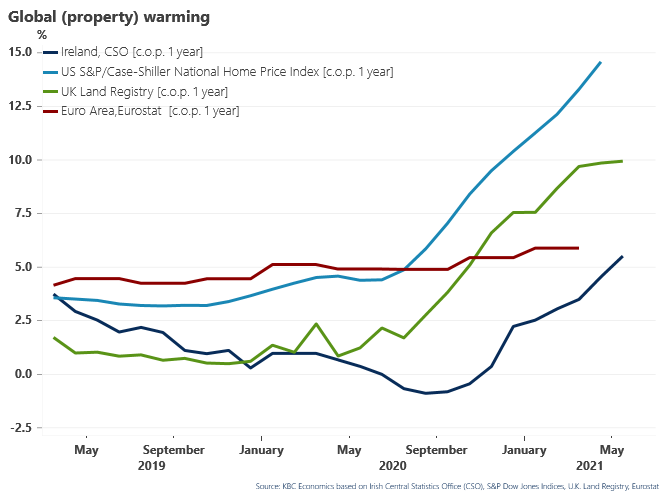 While the current rate of inflation remains somewhat early calmer for Dublin properties than elsewhere in Ireland, monthly changes in Dublin have matched or exceeded those elsewhere for the past three months and the acceleration in the annual rate was more marked in Dublin (May 4.9% v April 3.7%) than outside the capital (May 6.2% v April 5.4%).  So, these data confirm a very broadly based pick-up in Irish property prices of late.

In light of widespread expectations of significant policy measures on housing in the Government’s upcoming Summer Economic Statement, it may be worth considering what we see as four distinct drivers of rising Irish house prices at present (though Irish housing market difficulties run well beyond these factors);

While factors 1 and 2 may offer some lasting support to Irish property prices in coming years, an easing in the current ‘bubble’ in demand and blockage in supply should prompt an eventual easing in Irish house price inflation in coming years.  How quickly and how smoothly that process is will depend in no small part on the nature and scale of policy interventions in the property market in coming years.

While we have consistently argued the case for fiscal measures to support the Irish economy’s transition to a sustainable post-pandemic path, we must distinguish between the need for demand-focussed measures in some areas to underpin job prospects and supply focussed measures in other areas such as infrastructure spend that would include housing supply.

In most circumstances, engineering an appropriate degree of impetus to demand is a far simpler operation than enhancing supply. While we continue to downplay the financial constraints on the Irish government’s financial capacity to support housing, equally important physical capacity constraints argue that in the near term the risks to injecting too much additional spend into housing may be as great as injecting too little. In a recent piece (link to monday ) we suggested that further increasing public spending on housing by much more than €1bn in the next year or too may entail costs in terms of straining the construction sector’s capacity that significantly offset associated benefits.

To the extent that there is a temporary bubble in terms of the current level of demand, fiscal measures that strain physical capacity could exacerbate rather than ease difficulties in the short term. In such circumstances, the difficult task is to arrive at a ‘Goldilocks’ (not too hot, not too cold but just right) level of additional spend on housing and the precise formulation of measures that delays some current demand and speeds up some future supply.

In this context, the critical issue is what is done rather than how much is spent. Measures that encourage both buyer and builder expectations of a sustained and significant future increase in supply are likely to be more productive than interventions focussed on maximising Government spending on housing in the next twelve to eighteen months.