Irish residential property prices for April show another modest monthly increase that translates into a slight easing in annual property price inflation to 7.1% from 7.4%.  As was the case in March, the monthly gain was concentrated in Dublin property prices. This outturn suggests that generally healthy Irish economic conditions continue to be the main influence on property price trends, although, the picture remains significantly complicated by a shortfall in residential supply and the influence of CBI credit constraints.

We expect a gradual easing in the pace of annual price inflation to continue to around 5% by the end of this year. As monthly price changes were choppy through 2015, the slowdown in the year on year increases through the remainder of this year is unlikely to be a smooth process.

While monthly changes in Irish residential property prices can be volatile, the broader trend has been generally consistent with the turnaround in Irish economic conditions in recent years. As diagram 1 below indicates, the sharp fall in prices between 2007 and 2012 mirrored a substantial drop in numbers at work. While Irish property prices lagged the initial pick-up in employment, there was a notable overshooting through 2014 followed by a fairly abrupt slowdown in property price inflation through 2015. With jobs growth expected to remain robust and unemployment below 8% in April, the economic underpinnings of the Irish property market remain solid. 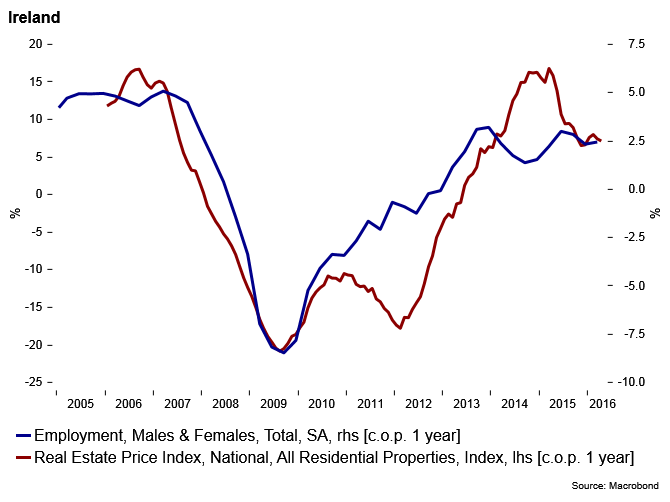 While today’s property price data for April appear consistent with a sustainable path for Irish housing inflation, a more notable feature of the Irish housing market of late is a marked weakening in transactions. As diagram 2 below illustrates, changes in transaction levels have been altogether more dramatic than changes in prices in recent years.

With 2015 housing market activity levels well below most estimates of what might be considered healthy or normal, the abruptness of the turnaround hints at some significant impact from CBI measures as occurred in a number of other countries following the introduction of macro-prudential constraints. While these developments highlight the scale of current problems, they also emphasise the importance of treading carefully with mooted further policy interventions in the Irish housing market (including the upcoming review of current macro-prudential settings) 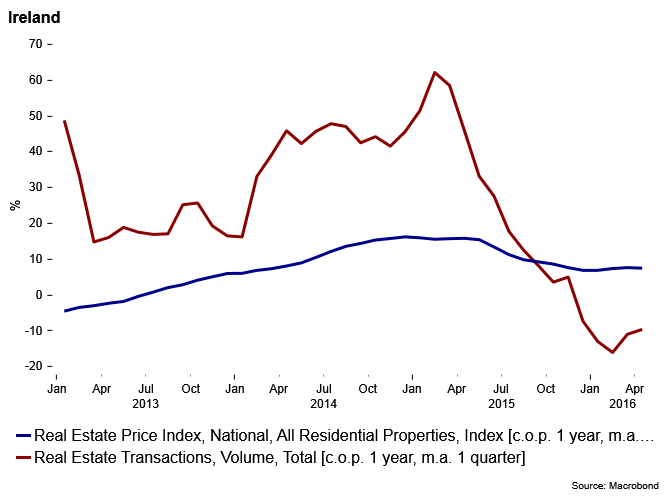