GDP growth could be less negative than thought in 2020

In marked contrast to most other economies (see diagram below), preliminary data suggest Irish GDP growth remained positive in the first quarter of 2020. Ironically, Ireland might avoid a technical recession (on the shorthand definition of two quarters of negative growth) but still suffer a severe depression. 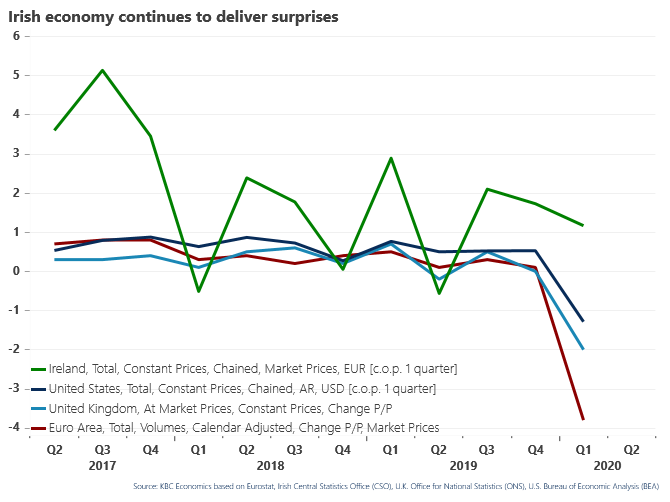 Notwithstanding these numbers, it remains the case that Ireland will suffer a severe downturn in economic activity this year but the scale of deterioration, at least in terms of the hit to GDP, may be less dramatic than some forecasts have suggested.

There are several reasons why the prospective decline in Irish GDP may be less than feared with varying implications for attempts to measure the underlying health of the Irish economy;

Today’s GDP data may be better than many expected but they are broadly in line with KBC forecasts. As the diagram below illustrates, if the Irish economy was to follow the quarterly path through the remainder of the year that the ECB envisages for the Euro area as a whole, Irish GDP would fall by just 2.2% for 2020 as a whole. 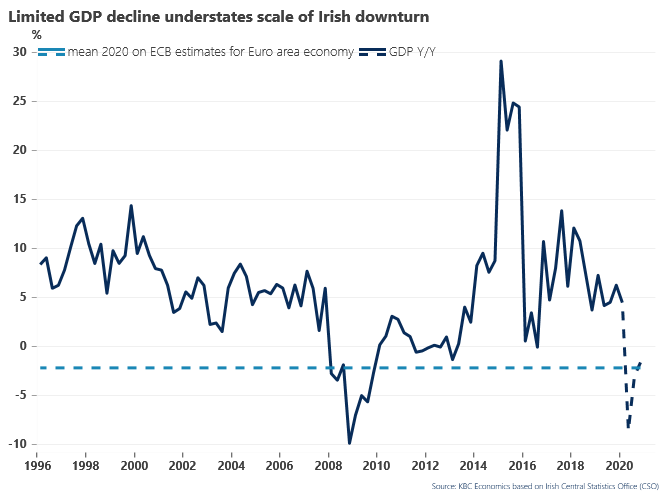 As we think the downturn in the second quarter could be marginally greater and the expected pull-back in the third quarter marginally weaker because of differences in the stringency of lockdown measures and speed of their removal, we think our existing forecast of a 5% drop in GDP in 2020 still appears reasonable. That said, the nature of the pandemic means there are still major risks to the downside.

More significantly, if the prospective scale of decline in Irish GDP may be less than might have been feared, the 10 percentage point rise in unemployment to an average rate of around 15% from 5% in 2019 gives a stronger sense of the extent of economic damage being experienced. As we have repeatedly argued, and the ECB indicated again yesterday ‘an ambitious..fiscal stance remains critical, urging ‘further strong and timely efforts to prepare and support the recovery’. Determined action from the Irish Government is needed to ensure elevated joblessness does not become a central feature of the Irish economy in coming years.