• Tax cuts/spending increases that offset water charges seem feasible while getting deficit comfortably below 3% of GDP.

GDP growth data for the second quarter exaggerate what is nonetheless a clear improvement in Irish economic conditions of late. On the basis of today’s numbers, it might appear that the boom times are back; GDP was 7.7% higher in the second quarter of 2014 than a year earlier, the fastest increase since the first quarter of 2007 (and barring that quarter, back as far as early 2001). However, we would caution that in a second quarter where employment was growing by 1.7%, average weekly earnings were down by 1.1% and household spending was up 1.8%, today’s GDP data may not capture the economic temperature now felt by many Irish households and businesses.

In spite of this important caveat, today’s data suggest both an improving momentum and a broadening in the emerging recovery. Year-on-year export growth of 13% stands out, although this number is significantly boosted by the increasing importance of Ireland’s role in a global production chain. (‘Contract manufacturing’ whereby production is carried out in another country on behalf of an Irish headquartered company has the effect of inflating exports. However, the impact on Irish economic growth is limited because of associated payments for services and profit flows abroad.) 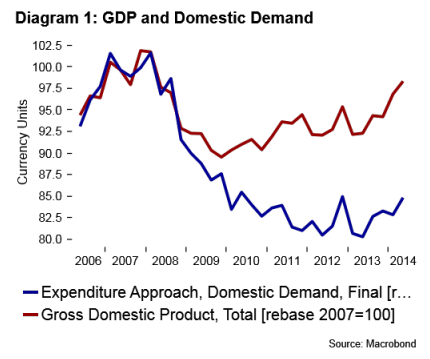 A possibly more significant development is that domestic spending is clearly improving. Aside from the gain in household spending which was the strongest in four years, building activity is up 10.9% and underlying investment in machinery and equipment (excluding aircraft) Irish GDP Data Point Towards Stronger Than Expected Recovery18 September 2014 3 is up 19%. As diagram 1 suggests, this represents a notable departure from the record of recent years when the improvement in growth was concentrated on exports.

The buoyancy of measured growth in the first half of 2014 suggests exceptionally strong growth is likely for the year as a whole. If GDP were to remain flat at the level recorded in the second quarter over the balance of the year over, 2014 would show a full year increase of around 5% compared to 2013. This would likely make Ireland the fastest growing economy in the western world this year.

Our sense is that a growth outturn in the 4.5-5% region appears feasible for 2014. This should be seen in the context of growth in the UK of just over 3%, growth in the US of a little over 2% and growth in the Euro area of under 1% (around 0. 8%). While we think the measured growth rate exaggerates the underlying improvement in the Irish economy by some margin, nonetheless, it does reflect some fundamentally positive developments. Irish growth this year owes much to improving conditions in the UK and US, more supportive interest rate and exchange rate conditions, an easing in headwinds from the fiscal adjustment allied to some release of pent-up demand in property related activities and some recovery in domestic business and consumer sentiment. Our sense is that growth will ease towards a 3% rate in 2015. 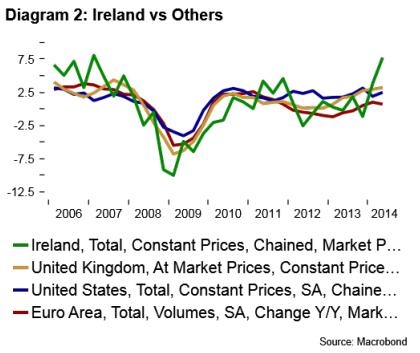 The outsized gain in prospect for Irish GDP in 2014 has important implications for the upcoming Budget. This year’s deficit is likely to be in the region of 3.5% of GDP, more than a percentage point lower than targeted. In turn, the deficit for next year will benefit from possibly significant interest rate savings as well as the buoyancy effects of stronger economic activity. A stronger economy serves both to boost revenues and reduce social welfare spending and also increases the denominator of the deficit to-GDP-ratio. Our best guess at this point is that the Minister for Finance could target a deficit-to-GDP ratio of not much above 2.5% of GDP while offsetting the impact of water charges through tax cuts or spending increases. In other words, rather than the initial estimates of a €2bn adjustment, we could have a broadly ’neutral Budget. Unfortunately, in the coming weeks there may be so many suggestions as to how many ways roughly €500mn could be spent that expectations in regard to Budget 2015 become very unrealistic.