Irish Economy Much Larger Than Previously Thought (In Statistical Terms)

No corresponding change to circumstances of most consumers or firms

New Irish economic growth data show an astonishing upward revision to GDP growth for 2015 from a provisional estimate of 7.8% to an extraordinary 26.3%. It should be emphasised that this revision is statistical in the sense that previous estimates of jobs growth of 2.6% and an increase in tax revenues of 10.5% in 2015 remain unaltered. So, these numbers don’t fundamentally alter the economic reality experienced by most Irish business and households or materially change the resources available to Irish society.

These revisions should also be seen in terms of a step change in that the measured size of Irish economic activity increased dramatically in 2015 but the rate at which it grows into the future is unlikely to be permanently boosted although it could become even more volatile than in the past.

The dramatic revisions released today primarily reflect reclassifications and relocations of a handful of companies that are very large by Irish standards and, consequently, materially alter the size of Irish economic activity as measured by standard International National Accounting practices.

These alterations materially increase the 'balance sheet' of the Irish economy, making it notably larger in a statistical sense. Today’s developments increase the productive capital stock of the Irish economy from about €700 billion to around €1050 billion (an enormous change in view of the fact that the capital stock usually changes incrementally to reflect the gap between Gross Capital Formation and Depreciation which was just €7 billion in 2014).

Ireland’s capital stock increased from about 325% of Irish GDP in 2014 to around 410% of GDP in 2015. As a result, the annual output associated with this much higher capital stock is scaled up sharply for 2015, resulting in the 26.3% rise in GDP reported today.

While a much larger capital stock suggests scope for persistently larger Irish economic output in the future, it doesn’t necessarily imply a persistently faster pace of growth (as the slowdown to a 2.1% annual rate of GDP growth in the first quarter of 20016 implies). However, it does suggest the possibility of greater volatility in quarterly GDP data as the scale and nature of companies and activities recently included in the GDP data mean they won’t necessarily mirror the contours of the remainder of the Irish economy. 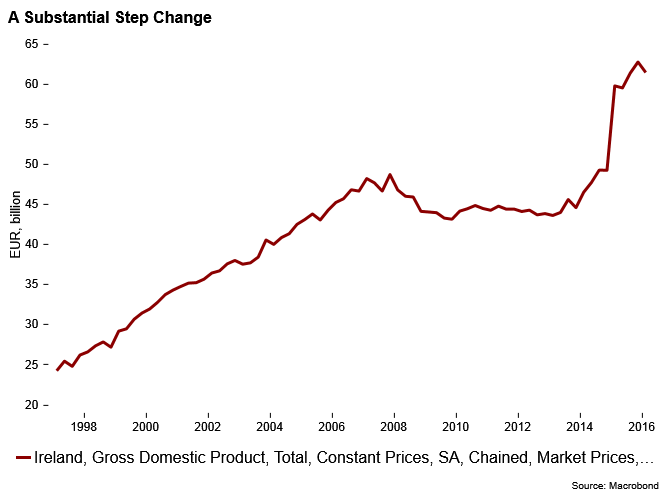 Some indication of the step-change nature of the revisions to GDP is provided by a consideration of the new profile for quarterly data in diagram 1 above. This diagram also highlights the somewhat disappointing data for the first quarter of 2016 which we discuss more fully below.

Turning to the components of Irish GDP, the revisions discussed above largely relate to exports and investment. As the table below indicates, there were also material changes to all the main spending elements from the preliminary estimates.  Domestic demand in 2015 was bolstered by a stronger trend in consumer spending than previously envisaged and healthy gains in construction as well as the impact of the adjustments discussed above on other investment spending. The activities of companies captured under today’s revisions also produce exceptional changes to exports and a likely associated upward revision to imports.

Although these developments don’t directly impinge on the economic circumstances of the average Irish firm or consumer, they have potentially important implications for Budget policy. By altering the measured size of the Irish economy, they do influence important ratios such as debt/GDP which we tentatively put at just under 79% of GDP at end 2015 rather than 94% of GDP as previously estimated.

Moreover, the scale of revisions seen today mean technical considerations such as Ireland’s potential growth rate, the associated output gap and, more importantly from a practical and political perspective, measures such as the structural budget balance and fiscal space are rendered virtually meaningless (even if there were always major problems with the mechanical nature of such calculations for an economy of the structure of Ireland).

On one interpretation, much stronger economic growth implies a weaker 'structural' deficit in the public finances and a corresponding need to tighten fiscal policy. However, stronger trend growth in recent years also raises the possibility of a faster permitted increase in public spending. As a result, these numbers imply considerable uncertainty about how formal constraints on upcoming budgets should or might operate. A major re-think is required to formulate fiscal rules that are likely to lead to sustainable and healthy trends in Irish public finances.

Today’s national accounts release also contains revisions to data for earlier years that are material if very modest compared to those for 2015. On balance, these revisions suggest weaker economic conditions in 2011 and 2012 and a notably stronger performance in 2014. This profile is more consistent witht the trend in the jobs market.

Alongside, the revised data for 2015 is the first estimate of activity in the first quarter of 2016. Surprisingly, this suggests a marked weakening in GDP of 2.1% from the fourth quarter of 2015. As consumer spending improved, construction increased and tax revenue data point to generally healthy domestic activity trends, the weakness in early 2016 seems to be concentrated in the ‘newer’ sectors of the economy and could reflect greater intrinsic volatility in these areas rather than any trend weakening.

We can’t say with any great confidence how quickly or how completely the reported softness of the first quarter is likely to be reversed through the remainder of the year – indeed, it would not take much to generate further weakness in the second quarter sufficient to threaten Ireland with a technical recession on the commonly used shorthand of two successive quarters of negative growth. However, such an outcome would seem very much at odds with the broad health of most other indicators of activity in the Irish economy.
The softness in first quarter GDP together with the downside risks posed by Brexit suggests that for 2016 as a whole, Irish GDP growth may come in somewhat weaker than the 5% rate of increase we previously envisaged.

The outlook for the Irish economy has been materially altered by the recent UK vote to leave the EU as ‘Brexit’ can be expected to have a significant negative effect on the Irish economic outlook. However, the precise nature, extent and timeframe in which this impact is felt remains unclear at this time. Our very tentative estimate is that Irish GDP growth could ease to about 3.5% in 2016 although this number is subject to some possibly heroic assumptions (that, we think, err towards the side of pessimism ) both in relation to the measured momentum in GDP revealed by today’s numbers and the speed with which  adverse Brexit effects are felt.