GDP up 6.3% q/q, continuing to outpace growth in other economies

Irish GDP data for the second quarter show a further dramatic increase in Irish economic activity. The 6.3% q/q increase that took GDP growth to 21.6 y/y is much larger than we envisaged and means that, even on relatively cautious assumptions about the remainder of the year, we need to revise up our forecast for Irish GDP growth for 2021 from 10% to 15%.

There is little in today’s data to suggest the current strong momentum in the Irish economy will not be sustained. However, significant uncertainty remains and risks around the near term outlook for activity lie on both sides. Re-opening effects should remain a positive factor as the year progresses as should the persistence of exceptional policy supports here and elsewhere.

However, increasing risks to activity here and elsewhere posed by the Delta variant, logistical  bottlenecks that are restraining production capacity globally and the dampening effect of markedly increased price pressures worldwide are all likely to constrain the pace of Irish economic growth through the second half of 2021.

The diagram below gives some sense of Ireland’s uniquely exceptional economic performance through the pandemic period by highlighting how the level of Irish GDP has moved onto a stronger trajectory at a time when activity was shrinking elsewhere. The Q2 data indicate that no easing in that out-performance. The increase in Irish GDP of 6.3% q/q continues to markedly outpace that seen in the UK (+4.8%), The Euro area (+2.0%) and the US (+1.6% on a non-annualised basis). 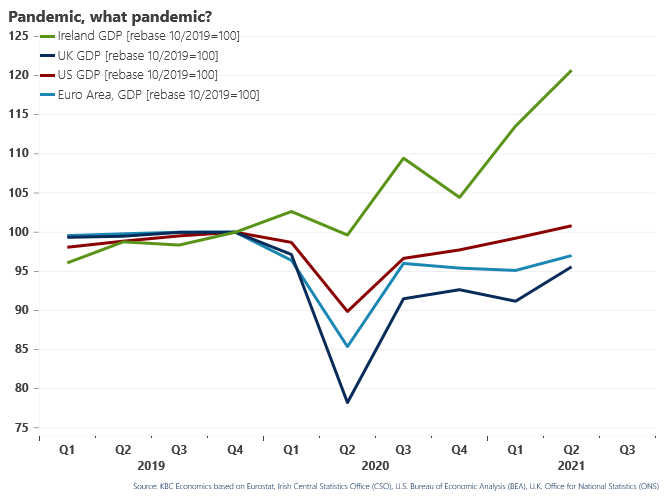 The most encouraging aspect of the Q2 release is the strength of the recovery in domestic focussed activity as health-related restrictions were eased. Modified final domestic demand increased by 8.4% q/q, a slightly faster pace than GDP. However, it remains the case that domestic spending is still very much in catch-up mode.

Whereas Irish GDP is now some 20.7% above the pre-pandemic level of Q4 2019, modified domestic demand is just 0.8% higher. A positive element in today's data is a notable 23.2% increase in construction investment that takes the level of activity 26.5% higher than in Q2 ’20 but that still leaves current output 8,2% lower than in Q2 ’19, implying there is still some way to go to restore construction activity if there is to be any dent in the current substantial supply shortfall.

Another notable aspect of these data is the ongoing but still extraordinary buoyancy of Ireland’s multinational sector. With exports up 6.4% q/q and 27.4% y/y, there is little indication in these data of any significant capacity constraints or supply bottlenecks acting to constrain Irish economic growth. In part, this may reflect the particular nature of these activities-highly specialised, high value production that is less vulnerable to generic shortages or logistical blockages. Instead, specific product cycles and the re-location of Intellectual Property assets to Ireland in recent years appear to be materially boosting the current supply capacity of the Irish economy in these activities.

Assessing the policy implications of today’s data is far from straightforward. To the extent that there is still a material shortfall in activity in some domestic focussed sectors, there is a need for targeted support. In addition, significant if specific infrastructure needs of the multinational sector need to be augmented by delivery of broader but urgent capacity in areas such as housing, transport and digital.

It is clear that mechanical measures of the Irish economy's ‘potential output’ can give little guidance in terms of the appropriate policy stance for Budget ’22. It is even clearer that policy interventions should be assessed on the extent to which measures introduced materially enhance supply rather than simply increase demand. The momentum in today’s data suggests that capacity enhancing measures are likely to be readily affordable as well as vital to sustain and broaden the path of Irish economic growth.