Exports, imports and investment data all heavily influenced by company-specific developments rather than macro conditions

As is often the case when looking at Irish GDP data, it is important to distinguish between the broad picture of current economic conditions painted by today’s National Accounts numbers and the precise numerical estimate of GDP growth in the third quarter contained in the release.  As diagram 1 indicates the pick-up in growth in the third quarter is nowhere near as dramatic as that seen in the data for 2015 but it is still slightly surprising when set against other indicators such as the pace of jobs growth. 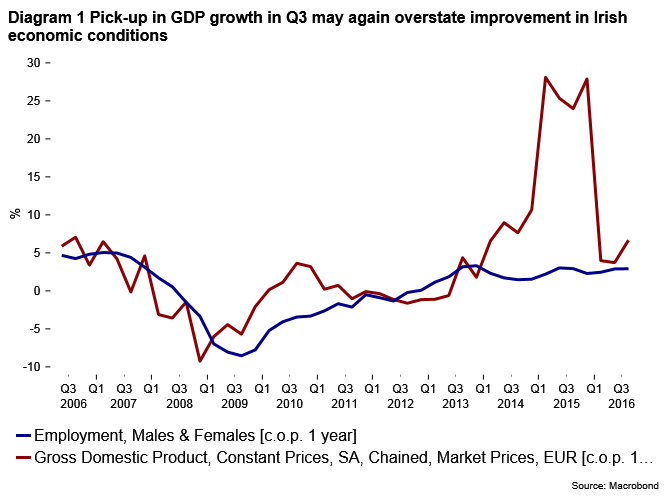 In general terms, today’s data are consistent with other indicators that suggest the Irish economy is posting solid growth. However, the recorded 4.0% quarter on quarter increase in GDP (which would translate to an annualised jump of 17%) dramatically overstates the current momentum of the Irish economy as experienced by most households and businesses.

If GDP were to be flat in the final quarter of 2016, the year to date trend revealed in today’s numbers implies the outturn for the year as a whole would be GDP growth of 4.2%. As we see some risk of a comparatively weak number for the final months of the year, we are inclined to stick to our previous estimate of a 4% annual pace of increase in GDP for the full year of 2016 but we acknowledge some upside risks to this number.

A growth outturn along these lines would be broadly consistent with employment growth of 2.7% through the first three quarters of the year and, as such, should be reasonably representative of conditions across the Irish economy as a whole. While our headline forecast is unchanged, we have made a number of significant changes to our estimates of various elements of GDP as diagram 2 indicates. 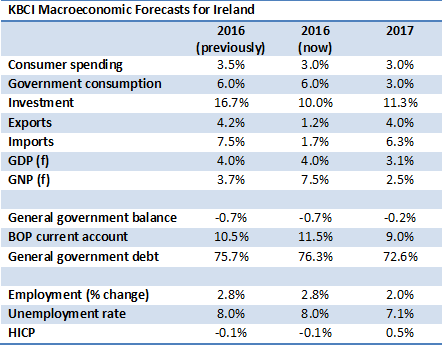 The details of today’s GDP release for the third quarter are consistent with other indicators that suggest that Irish economic growth remains solid overall but somewhat uneven at present. Consumer spending rose 0.7% between the second and third quarters, a clear improvement on the 0.3% decline posted three months earlier but we reckon this turn is substantially influenced by the changed seasonal pattern of car buying that has followed the introduction of six month identifiers on registration plates.

On an annual basis, the pace of consumer spending growth eased marginally to 2.1% from 2.2% in the second quarter. This softening is at odds with the improvement in labour market data but entirely consistent with the evidence from relevant tax headings and the more cautious tone of consumer sentiment readings of late. This has prompted us to revise down our forecast for consumer spending growth for the year as a whole as table 2 indicates.

Our forecast for investment for 2016 is largely unchanged but today’s data reveal some interesting developments within this aggregate. A dramatic fall in investment of 17.8% between the second and third quarter followed an even larger jump in the previous quarter and is entirely explained by large swings in purchases of intellectual property that are related to company specific developments rather than broader conditions in the Irish economy (as such transactions usually involve international transactions, the effect on investment is offset by an effect on imports and, consequently, such activities tend to be neutral in their impact on Irish GDP).

The major driver of outsized Irish quarterly GDP growth in the third quarter was the divergence between growth in exports (+1.7%) and a fall in imports (-8.6%).  As the drop in imports substantially reflected the fall in purchases of intellectual property discussed above (the real quarterly drops in these two aggregates were €5.1bn and €5.5bn respectively), we don’t regard it as a harbinger of notably weaker activity levels in the Irish economy and we expect some rebound in the final quarter of the year.

A solid quarterly increase in exports (+1.7%) was concentrated in service exports (+7.0%) while goods exports fell (-2.4%). When we applied a seasonal adjustment process to CSO trade data our estimates suggested that goods exports to the UK and Northern Ireland fell notably faster than to other destinations. So today’s data are consistent with some impact from Sterling weakness on Irish goods exports.

Given the overall composition of Irish trade, the performance of exports in aggregate in coming quarters may be more heavily influenced by the performance of the latest generation of products from Irish based multinationals than they are by Brexit-related issues. However, as such exports entail significant imports, the net trade performance may weaken somewhat.

As has been the case for some time, there is no single figure summary in today’s GDP figures that adequately captures the diversity of circumstances prevailing within the Irish economy. The outsized quarterly jump in GDP is largely technical in nature but, beyond the headline figure, the details of today’s release suggest that activity remains on a positive path, with a solid growth rate of around 4% in prospect for 2016.. There are also signs of a more cautious consumer, continuing catch-up in construction and tentative signs of some impact from Sterling weakness on goods exports. These elements inform our continuing expectation that growth will moderate further towards a 3% pace in 2017.