We estimate real gross national income* (a new measure of Irish growth) grew by 9% in 2016, notably above the 5.1% outturn for GDP

New estimates of Irish economic activity suggest underlying growth has been on a somewhat stronger path than previously thought. We estimate that ‘real’ growth as measured by a new measure GNI* was in the region of 9% in 2016, a notably stronger outturn than suggested by growth in GDP of 5.1%. While not questioning the statistical integrity of the new measure, our sense is that growth in GNI* likely overstates the pace of improvement experienced by most firms and households of late but it does serve to underline the healthy momentum of the Irish economy at present.

As diagram 1 below indicates, real GDP growth is frequently compromised as a representative barometer of Irish economic conditions by exceptional multinational activities as evidenced by the outsized outturn for 2015. To address this issue, the CSO has introduced a new measure ‘GNI*’ that excludes the key sources of recent distortions. Unfortunately, this new measure is not available in ‘real’ terms. We arrived at the approximation of ‘real’ GNI* growth, produced in the diagram below, by dividing the new nominal GNI* series by the deflator for the more conventional, if little used, GNI series. 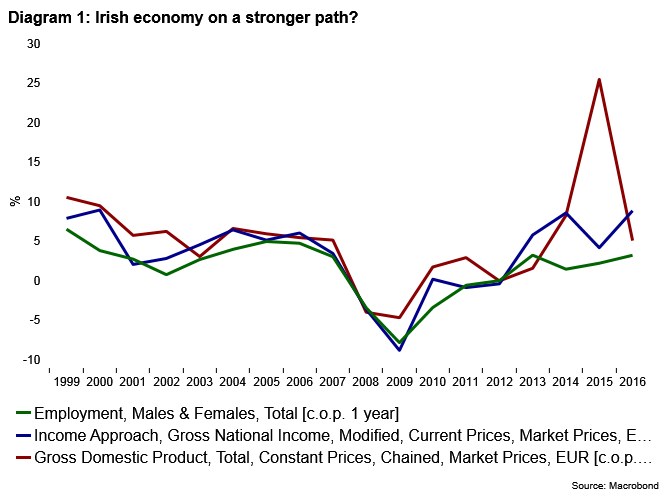 As the graph shows, GNI* has shown a broadly comparable trend in growth rates to GDP over time (with the obvious exception of 2015) and the contours of both of these series are broadly consistent with the trend in jobs growth even if the outturns for specific years often diverge. Indeed GNI* growth has exceeded GDP growth in two of the past three years in line with a step-up in employment growth.

As increases in GNI* have consistently outpaced employment growth by a similar margin as GDP, this new metric implies underlying momentum in Irish economic activity may be somewhat stronger than previously thought for the past three years. Our estimates of real GNI* suggest growth rates of 5.9% for 2013, 8.7% for 2014, 4.2% for 2015 and 8.9% for 2016, translating into a robust average growth rate of 7.0% per annum over this period.

These new estimates may stoke up the overheating debate further. However, growth in consumer spending since 2012 has been fairly subdued, averaging just 2.3% per annum (revised up marginally from a 2.1% pace), a pace that is lagging jobs growth (+2.6% average since 2012) and reflective of a household sector that is still in post-crisis healing mode.

Moreover, at -0.6% in June, Ireland’s inflation rate is likely to remain the lowest in the EU while lending to households and non-financial corporates was still running at a significantly negative rate in the latest data for April 2017 (-4.9%). So, on a range of metrics, Ireland remains some considerable distance from any conventional idea of an overheating economy. Instead, these data might even suggest that Ireland’s growth capacity is stronger than previously thought.

The varying estimates of the pace of Irish economic growth and related questions about the possibility of overheating emphasise that commonly followed headline indicators may not adequately capture changes in Irish economic conditions. A further problematic example from today’s release concerns a series of possible adjustments to Ireland’s balance of payments that if mechanically followed would transform a headline current account surplus of 3.3% of GDP in 2016 to a deficit on a modified basis of some 15.5% of GNI*.

It should be emphasised that the results of this process appear to stem principally for an adjustment related to depreciation following from what is believed to be a single multinational’s contribution to an outsized jumps in Ireland’s capital stock and GDP in 2015. Moreover, the correction process may not have excluded some other impacts on the 2016 outturn related to changes in multinational activities. Finally, there was a sharp jump in the quarterly balance of payments surplus to 12.4% of GDP, matching that seen in Q2 2015 as the largest scale of surplus on record. This too might point towards a less worrisome trajectory than could be inferred from the modified figure for 2016.

We are inclined to downplay the significance of this preliminary estimate for Q1. We find it hard to put much emphasis on a figure that suggests the first three months of 2017 saw the sharpest decline in underlying domestic demand for the past six years. While ‘lumpy’ capital spending projects may have contributed to a drop in investment, our strong sense is that the positive momentum evident in most other indicators such as jobs growth and business surveys is reflective of an Irish economy that remains on a strong footing. As a result, we continue to expect headline and underlying GDP growth in the region of 4% this year.