Multinational activities still cloud picture but we estimate underlying growth at 4-4.5% in 2018

Irish GDP growth eased further to a solid but not spectacular pace of 3.0% in the final quarter of last year. As a result, for 2018 as a whole GDP growth came to 6.7%, an outturn that is reasonably similar to a 7.2% Increase in 2017.

We continue to envisage GDP growth of around 3.5% in 2019 on our working assumption of a ‘soft but not smooth’ Brexit. The latter would entail a short delay to the scheduled withdrawal date, a transition period to the end of 2020 and ongoing uncertainty through this time-frame as to the eventual relationship between UK and the EU. Such conditions would weigh on export growth and could also prompt greater caution thereby dampening growth in consumer spending and investment. In brief, our Brexit scenario constitutes a slow puncture rather than a blow-out to the Irish economy in the coming year.

The broad picture emerging from today’s data for the 4th quarter is of an economy that is seeing an ongoing if marginally slower improvement in domestic spending and a multinational sector that is growing in a manner that makes headline Irish growth data increasingly difficult to relate to the conditions facing most businesses and households.

Reflecting longstanding complications stemming from the operation of globally scaled companies in a small economy, headline GDP data don’t  provide an adequate summary measure of  developments across the Irish economy as a whole (although the information content of elements such as household and public spending as well as construction is critically important).

As alternative measures such as GNI* are  not (as yet) produced on a quarterly basis and their annual estimates don’t distinguish between changes in prices and ‘real’ activity, more attention has been focussed on measures such as modified domestic demand. However, this does not take account of non-globalised’ exports and imports, it may not give an adequate picture of  economy-wide developments, particularly in circumstances such as Brexit where the trade channel is so crucial to economic outcomes.

In the absence of entirely satisfactory spending or output measures, we continue to rely on labour market data as our primary barometer of Irish economic conditions. We combine movements employment (on a full-time equivalent basis) with an estimate of historic productivity trends (derived by deflating annual GNI* by the broader GNI deflator) to arrive at an estimate of underlying economy-wide activity growth. Our estimates shown in the diagram below suggest the underlying pace of growth slowed to just under 4% in the final quarter of 2018 and averaged about 4-4.5% for 2018 as a whole. 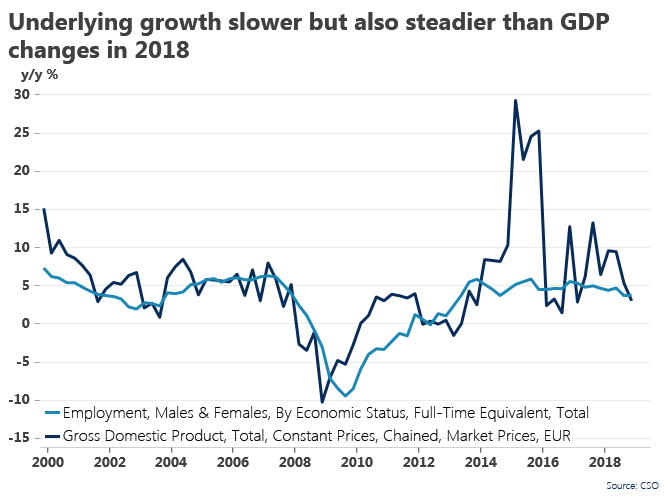