Population growth of 1.1% compares to 0.2% for EU and 0.5% in UK and US. Somewhat surprising easing in net inward migration in past twelve months .. .. but balanced population growth suggests Ireland at demographic ‘sweet spot… ….which presents great opportunities but also challenges for domestic policy. Infrastructure and pension reform likely to prove important issues as to whether demographic dividend helps or hinders progress

Population and Migration data for the twelve month period to April 2020 are positive in that they show Ireland continues to experience strong and broadly balanced population growth that makes it almost unique in Europe.

Slowdown in net inward migration slightly surprising
While the strength of population increase is the most notable aspect of today’s demographic data, it is quite surprising that they also suggest a slowdown in the pace of Ireland’s population growth from 1.3% in 2019 to 1.1% in 2020.

This slight slowdown is partly due to an anticipated easing in the pace of ‘natural increase’ (i.e. births less deaths) of 3.6k but this continues to contribute 0.6% to population growth. The more significant driver is a somewhat surprising drop in net inward migration. We felt these data might see a continuing uptick in net inward migration. We didn’t envisage the relatively large drop of 8.6k compared to 2019 reported in these figures that lowers its contribution to population growth from 0.7% to 0.6%.

In circumstances where Brexit-related concerns might have been expected to prompt  a pick-up in flows from the UK, a significant decline in inflows (to 15.3k in 2020 from 19.7k in 2019 and broadly similar levels in previous years)  is difficult to explain unless we believe that such flows had already largely happened.
More generally, as the pace of Irish economic growth has picked up notably in recent years and prompted sharp increases in employment and corresponding declines in unemployment seem at odds with a decline in inward migration overall and an increase in outward migration.

It could be the case that the slowdown in net inward migration reflects ‘bottlenecks’ such as housing problems or skill mismatches but broadly rising wages and reported skill shortages in many areas would suggest this would not be a binding constraint.

At the margin, there could even be some possibly temporary net outflows or other disruptions related to the March Covid-19 ‘lockdown’. While the background notes reveal a sharp drop in Personal Public Service Numbers issued to non-Irish nationals in March and April, travel data don’t show a corresponding jump in outward relative to inward journeys.

At this point, we think statistical issues might offer a more plausible explanation. It may be the case as previous Census-related revisions have revealed that there is a tendency in these survey-based annual population estimates to understate the true pace of population increase.

Key takeaway is strength and balanced nature of Irish population growth
Notwithstanding the slight easing in the pace of population growth in Ireland, it remains notably faster than that of most other countries. The 1.1% rise reported today with increases of 0.2% in the population of the EU27, and 0.5% in both the UK and the US.

Ireland’s population growth is currently the fourth fastest in the EU behind Malta (+4.2%), Luxembourg (2%) and Cyprus (+1.4%). Growth in those three countries is primarily driven by outsized net inward migration. Indeed for the EU27 as a whole, net migration is the main driver of population growth.

The ‘natural’ rate of population increase (the gap between births and deaths) is positive in only ten out of twenty seven countries and negative for the region as a whole. Ireland’s ‘natural’ increase of 0.6% is the fastest in the EU. As a result, the drivers of population growth are notably more balanced here than elsewhere. The diagram below illustrates the exceptional nature of Irish demographics in this regard at present. 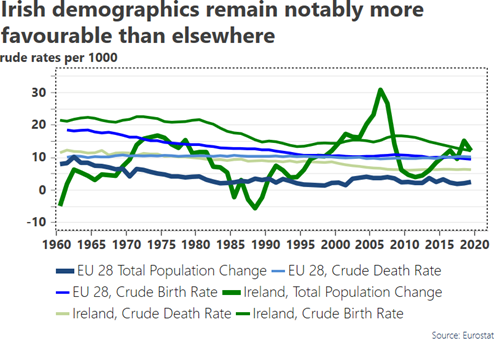 While the Covid-19 crisis understandably focusses attention on very short term concerns, these data emphasise both significant opportunity in the shape of notably stronger growth potential than most other developed economies and immediate challenges in areas such as housing and more medium term issues such as ageing. In turn, this suggests the range of possible outcomes for the Irish economy is wider than for many others and highlights the critical need for domestic policies that harness rather than hinder this demographic dividend.

The current pace of population growth suggests that the growth capacity of the Irish economy is notably stronger than that of most other developed economies. While there are any number of technical issues around the precise measurement  of ‘potential growth’, in very broad terms demographic numbers such as today’s might suggest the Irish economy has the capacity to sustain growth of anywhere between 2 and 3 per cent whereas the Euro area norm is about 1 per cent.

Importantly, this stronger growth capacity emphasises the need to ensure investment in public infrastructure is maintained at a pace adequate to avoid bottlenecks that would threaten recurrent boom/bust cycles. More generally, these data provide a clear statistical picture of a key driver of the almost relentless demand pressures in areas such as housing and health where rapid population growth means we have run much faster just to stand still.

Importantly, the faster economic Irish growth potential attainable on current demographic trends are also reflected in strong revenue growth and favourable public debt dynamics that, in tandem with subdued borrowing costs imply a greater resilience in the public finances and greater comfort around available ‘fiscal space’ for Ireland (see previous analysis here). The critical issue is to ensure that beyond Covid-19 crisis-related measures, public borrowing is associated with the carefully planned build-up and maintenance of publicly owned assets to support a strongly growing population rather than, as in the past, a boom and bust cycle leading to ‘debt by misadventure’.

Although the current demographic picture is extremely positive and Ireland currently has the lowest median age in the EU (37.7 against an EU average of 43.3) , as is the case for virtually all developed countries, Ireland’s population is ageing. The diagram below shows that while the Irish economy is still very much in a sweet spot demographically in that numbers in the prime working age groups of 25-44 are still double that of over 65’s, the rate of increase in those aged over 65 is 3.4% and now some three times that of the population as a whole. This implies that problematic issues around pension reform will become more difficult politically as well as financially much more costly, the longer they are delayed. 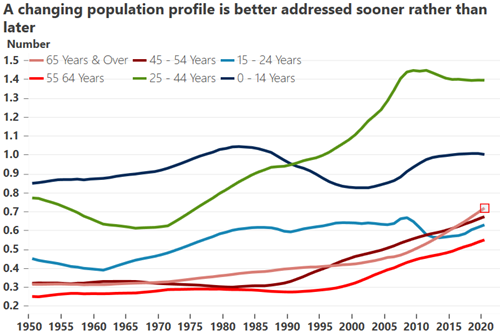