• Current Irish reading contrasts with ‘feelgood’ emerging among US and German consumers.

Irish consumer sentiment remained largely unchanged in May. There was a marginal increase in the KBC Bank Ireland/ESRI Consumer Sentiment Index to 61.2 from its April reading of 58.9 but this shouldn’t be regarded as signalling any marked improvement in the mood of consumers. The index has changed little in the past three months as consumers await decisive evidence indicators as to whether recovery is taking hold or greater difficulties might lie ahead.

Relatively ‘quiet’ sentiment readings of late contrasts with some sharp movements in the index around the turn of the year as the emerging newsflow seemed to point clearly first in one and then the opposite direction. Overall, the lack of any decisive trend in the circumstances of Irish consumers of late is hinted at in changes in the index alternating between positive and negative each month since November. This has left the level of the sentiment index in May 2013 is almost identical to that prevailing in September 2012.

Although consumers appear to have some sense that the broad Irish economy may be improving, the extent of any upswing is altogether too limited to ease continuing concerns about their personal finances. The current level of the index is clearly better than the low-point of the crisis but it is below what might be expected in a healthy Irish economy. In this respect, the sentiment index suggests that Irish economic conditions may have stopped getting worse but household finances are not getting any better. So, consumers continue to wait for a ‘real’ recovery—one in which they feel they are clearly sharing.

‘Feel-Good’ Factor Becoming Evident In US And Germany

The marginal rise in the Irish Consumer Sentiment Index in May coincided with a similarly limited gain in the preliminary estimate of Euro area consumers’ confidence whereas it contrasted with a notably larger gain in the early reading of the comparable US indicator. The slight improvement in sentiment among Euro area consumers probably reflects growing optimism among German consumers as preliminary French data show a clear decline in consumer sentiment in that country in May.

The widely watched GFK indicator showed confidence among German consumers has now recovered to its highest level since September 2007. This improvement was attributed to strong employment conditions and easing inflation in Germany. We also think the somewhat tougher line evident in official pronouncements in regard to assistance to problem Eurozone economies likely encouraged the view that the costs of the Euro crisis to the German consumer might be controlled. The driving force behind stronger sentiment in the US this month appears to have been encouraging jobs market data in the states in early May accompanied by favourable trends in housing and stock markets. So, the improvement in the latest German and US sentiment readings seems to reflect economic and financial circumstances that are notably different to those facing the average Irish consumer at present.

While the mood of Irish consumers was only marginally better this month, the details of the May sentiment survey show a broadly positive tendency—four of the five elements of the survey posted higher readings than in April. However, the increases in each instance were very modest and it is noteworthy that the slightly less negative assessment of household finances failed to prevent a small weakening in the buying climate. Both ‘macro’ elements of the survey posted small increases in May. The survey period saw no major change in thinking on economic prospects and the regular batch of economic indicators painted a mixed picture that suggest a relatively subdued recovery has not shown any dramatic changes in momentum of late. Through the survey period there were a number of positive job announcements and a slight decrease in numbers on the Live Register but any favourable impact from these developments was largely offset by concerns about the implications for job security from the announcement of the receivership of Xtravision.

The most positive element of the May survey was in relation to the outlook for household finances—an area that has been particularly weak in recent months. We should emphasise that a limited improvement in May doesn’t alter the general picture of an Irish consumer who remains worried about a continuing deterioration in their financial situation. In this context, the May results show that only 10 per cent of those surveyed see an improvement in their personal financial situation in the coming year compared to 56 per cent who see a further weakening. While this may be somewhat better than the 7:60 negative split recorded in April, it still signals a considerable degree of concern in relation to money matters.

While we wouldn’t want to overstate the significance of what was a modest change in this element of the survey, we think three factors may have contributed to the slightly less negative reading in May. First of all, there was a further 25 basis points reduction in the ECB’s refinancing rate in early May. This was accompanied by a hint that ECB rates could be cut again if economic conditions worsened further. Given that tracker mortgages account for about half of mortgage credit outstanding in Ireland, the ECB rate cut translated into an improvement for many homeowners with relatively large borrowings. A further helpful influence on the outlook for household finances in May was the persistence of extremely low inflation reported in official data for April during the survey period. To the extent that low inflation is expected to be an enduring feature of the economic outlook, the squeeze on household spending power is eased. Again, we would highlight the strained position of many household budgets--and yesterday’s earnings data indicate continuing weakness in incomes. This means low inflation may be a necessary condition for sustainability rather than a potential source of a notably stronger trend in spending in coming months. The marginal weakening in the buying climate reported in May would also be consistent with such an interpretation.

A final factor that could have made consumers marginally less negative about their personal finances in May may have been a number of reports suggesting that the degree of austerity likely to be implemented into upcoming Budgets might not be quite as severe as had been feared. There is little question that most Irish consumers expect further significant damage to their spending power from each of the next two Budgets. As we noted previously, Irish consumers are nervous primarily because of the degree of pressure on their personal finances. However, uncertainty has contributed to the degree of nervousness for a number of reasons. First of all, the scale of adjustment needed to meet fiscal targets has been revised upwards on a number of occasions in recent years. Second, adjustments signalled in terms of billions of Euro or percentages of GDP may have taken some time to translate into an appreciation of the precise impact on monthly family finances. The sensitivity of sentiment and spending to these sorts of uncertainty should inform the design of the next Budget in October.

The prospect of a clear improvement in both sentiment and spending into next year would likely be enhanced by an adjustment package in Budget 2014 that takes due account of the fragile state of household finances and uses some portion of savings emerging from the promissory note deal to reduce the planned adjustment from around €3bn to something closer to €2-2.5bn. This should still keep the Budgetary metrics in line with Troika targets but it would also be more supportive of near term growth prospects—a key consideration as Ireland prepares to exit the bailout. Importantly, by assisting households under severe strain and signalling some small dividend from previous efforts, a carefully framed Budget could mean consumers end 2013 in a more confident mood. On the other hand, a poorly crafted Budget package might threaten a nasty negative feedback loop with efforts to deal with mortgage arrears; such an outcome could set confidence and spending on a notably poorer trajectory in late 2013. 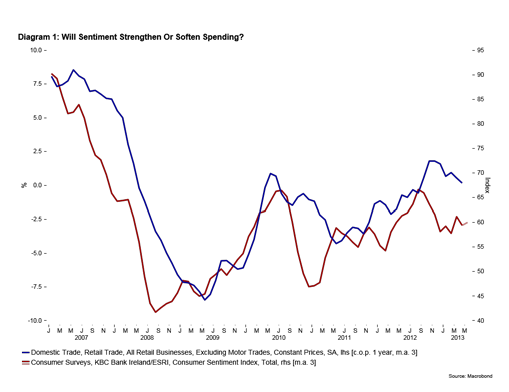 Some indication of the nature and the scale of the constraints on household finances is seen in the trend in retail sales of late. As diagram 1 indicates, the broad trend in consumer sentiment (as indicated by the 3 month moving average in the index) has moved along a similar path to retail sales (excluding cars and also using the 3 month average). The brief boom in retail spending in late 2012 was driven in large part by the impact of the digital switchover on sales of electrical goods and has given way to a clearly weaker trend of late that is consistent with the lacklustre performance of the Consumer Sentiment Index. It would seem that a notably stronger trend in sentiment and purchasing power may be required if consumer spending is to stabilise in 2013 and promise a more positive outturn in 2014. This emphasises the need for a Budget that helps rather than hurts confidence.