Budget 2017 may have had a modestly positive effect but high profile pay disputes also seem to beweighing on sentiment.

A fractional increase in the KBC Bank Ireland/ESRI Consumer Sentiment Index in November should probably be seen as signalling that there was no significant change in the mood of Irish consumers last month. In turn, this suggests consumers remain cautious both in relation to the general economic outlook and their own personal finances.

The details of the November survey hint that Budget 2017 may have been seen as offering some support to household spending power but this impact was relatively modest and largely offset by concerns about the broader economic climate.

The broader message of the sentiment index is that Irish consumers are having considerable difficulty in assessing the extent to which their circumstances might improve or worsen in the coming year.
The KBC Bank Ireland/ESRI Consumer Sentiment Index increased to 97.8 in November from the 20 month low of 97.3 recorded in October. A monthly change of just 0.5 percentage points can’t be regarded as statistically significant. Hence it is probably best to regard the November reading as unchanged from October.

The sense that recent survey readings are hinting that Irish consumers have become more cautious of late is supported by the drop in the three month moving average of the sentiment series—a widely used measure of the underlying trend--- to a 15 month low in November.

The broadly stable monthly reading for Irish consumer sentiment in November contrasts with clear changes in the mood of consumers elsewhere last month. We consider the more important of these to assess the relative importance of domestic and global drivers of Irish consumer sentiment at present. Developments abroad also provide some indication of the momentous changes in economic circumstances that consumers in Ireland and their counterparts in other countries are trying to understand.

November saw the largest monthly increase in US consumer sentiment since December 2013.  This largely reflected a jump in expectations about the future in the wake of Donald Trump’s Presidential election victory and, as such, underscores the sense of detachment many consumers have felt from an improving US economy in recent years and the associated appeal of ‘populist’ rhetoric.

Euro area consumer confidence also improved materially, if notably less spectacularly than in the US in November. The monthly gain brought this index to its strongest level since December 2015 and owed much to a notably stronger view of economic prospects on the part of consumers in ‘core’ Euro area countries, perhaps reflecting spill-overs from German economic strength.

In contrast, UK consumers became notably gloomier in November, with the GFK index posting the second largest monthly drop (after July’s post-referendum slump) since November 2012. This seems to reflect a notably more pessimistic view of UK economic prospects over the next twelve months that likely owes something to fears of notably higher inflation and correspondingly diminished purchasing power as well as growing uncertainty about the precise exit path for the UK from the EU.

The effectively unchanged Irish consumer sentiment reading for Ireland in November suggests there was no dramatic change in the circumstances of consumers in this country last month. However, declines in three of the five main elements of the survey and improvements in the other two may suggest there are clear cross-currents in the factors influencing the sentiment and spending of Irish households at present.

After declines in the two previous months, views on the Irish economy held broadly steady in November as a slight increase in this element was too small to suggest any meaningful change in thinking on the economic outlook. Both positive and negative responses to this question were modestly higher than in the October survey, an outcome that may reflect differences in opinions as to the implications of a shifting global economic landscape.

Perhaps surprisingly, consumers were notably more downbeat on the outlook for jobs in the next twelve months, with this element of the survey posting its weakest reading in 28 months. This assessment seems at odds with official employment data released after the survey closed in November. Those statistics paint a picture of a strong jobs market in Ireland, showing numbers at work up 57,500 in the past twelve months and the unemployment below 8% for the first time in eight years.

Our sense is that the weaker consumer sentiment reading in respect of job prospects may reflect a couple of concerns. First, there is clearly more uncertainty about the pace of future job creation in Ireland in light of Brexit or possible changes to US Foreign Direct Investment (FDI) in Ireland following Donald Trump’s Presidential election win. A second and possibly more immediate concern is a notably more fractious industrial relations climate at home, particularly in the public sector, with the November survey period marked by high profile pay disputes for Gardaí and teachers. These considerations may have prompted consumers to mark down their expectations for the Irish jobs market in the year ahead.

The most positive element of the November survey was a retracement of most of the deterioration reported in October of consumers’ views as to how their household finances had fared through the past twelve months. Importantly, it remains the case that a (slightly) greater number of consumers felt their financial circumstances had worsened than judged them to have improved but views were clearly less pessimistic than in the previous survey. Our best guess is that this reflects a slight positive surprise in terms of measures introduced in Budget 2017 but, as we mentioned a month ago, expectations were running fairly low ahead of the Budget day announcements.

If consumers saw themselves marginally better off in the wake of Budget 2017, this is not seen markedly altering their financial prospects for the year ahead. Consumer thinking on the outlook for household finances in the next twelve months was marginally weaker than in October. Again, this may owe something to increased industrial relations discord of late as well as pressures in specific areas of living costs particularly those related to housing. 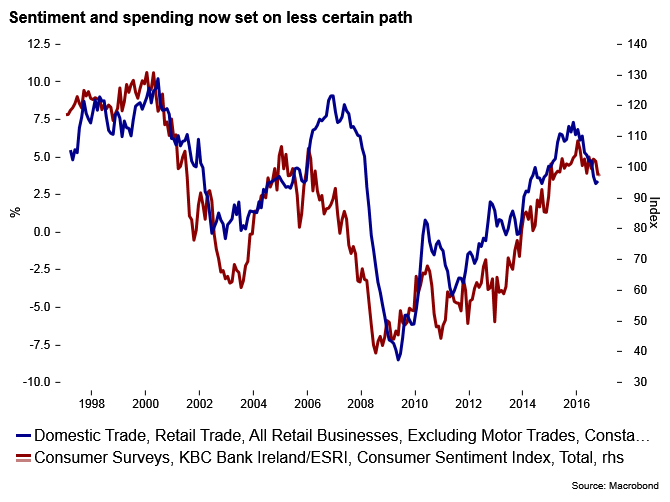 A more uncertain economic and financial outlook led to a further modest downgrading of the buying climate in October. The anticipation of significantly increased outlays over Christmas may also have led to some seasonal curtailment of buying plans in the November survey. Beyond such influences, the diagram above indicates that both sentiment and retail sales have moved onto a somewhat softer trajectory of late.

As a result, the November sentiment reading might suggest that the slightly softer tone of spending evident in recent retail sales data and tax receipts could continue even if Christmas outlays might be expected to show some temporary uplift. Until the Irish consumer is more confident that 2017 will be a year of economic progress, a cautious approach may dominate and gains in consumer spending may remain uneven and fairly contained.