Consumers expect improvement in household finances for first time since 2007.

Irish consumer sentiment improved sharply in January. The KBC Bank Ireland/ESRI Consumer Sentiment Index increased to 101.1 from 90.5 in December, bringing the index to its highest level since February 2006. The monthly rise in the index was the 4th largest in the nineteen year history of the survey. As the three larger increases all occurred around the turn of the year, there is likely to be some seasonal influence at play. As a result, it would not be surprising if there was some retracement in February. However, the scale and breadth of the increase in sentiment in January 2015 clearly points to a material improvement in the mood of Irish consumers of late.

The details of the January reading are encouraging.  All five elements of the survey improved but the largest contribution came from markedly more optimistic views on the outlook for household finances. The January data mark the first time in nine years that more consumers expect their personal finances to improve rather than worsen in the year ahead.

The stronger Irish consumer sentiment reading for January mirrored notable if more modest gains in similar indicators in many other countries. A sharp drop in oil prices likely contributed significantly in this regard while ‘local‘  influences either amplified or dampened its effect. In the US, the closest corresponding sentiment measure rose from 93.6 in December to 98.1, its highest level since 2004 as consumers expressed greater optimism about the economic outlook.

In the Euro area, the improvement in January was muted- as confidence continues to reflect ongoing worries about weak activity but it was still sufficient to raise the index to a six month high. It was also broadly based with some improvement in sentiment in fourteen of the nineteen countries, including both Germany and Greece, which share the single currency. Interestingly, two of the most closely watched confidence surveys for the UK showed conflicting trends in January-an outturn that may hint at a range of conflicting influences on the mood of British consumers as the general election draws closer.

Stronger Irish Sentiment Reading Only Partly Due To Sales

The improvement in Irish consumer sentiment in January was broadly based with all five elements of the survey posting stronger readings than a month earlier. As usually happens in January, there was a marked increase in consumers’ assessments of the buying climate. This largely reflects a response to price-discounting in post-Christmas sales and as such might be expected to be reversed once those sales end. However, there may also be a more enduring element to this improvement because consumers may also be more willing to make larger ticket purchases as their perception of the economy and their circumstances improve. This interpretation would appear consistent with buoyant car sales data reported for January. While the rise in buying intentions was substantial and may be partly reversed in coming months, we estimate it accounted for just over a quarter of the rise in the overall sentiment index in January.

Change In Thinking On Household Finances The Most Important Development

The most notable aspect of the January results was a substantial improvement in consumers’ views on the outlook for their personal finances in the year ahead. This represents a marked departure from the trend of the past couple of years when an increase in the sentiment index was primarily driven by consumers’ sense that the broad economy was recovering rather than a direct personal experience of better personal circumstances. Although it would be hugely premature to declare this disconnect has ended on the basis of one month’s results, the January survey hints that consumers feel they are more likely to share in the Irish economic recovery in 2015.

Up to this point, Irish consumers have drawn a clear distinction between an improving ‘macro’ climate in Ireland and ongoing strains on their household finances. The two lines in diagram 1 represent the difference between positive and negative responses given to questions in relation to the outlook for the Irish economy and consumers’ own personal finances in the following twelve months. Each month since September 2013 positive responses have outnumbered negatives in relation to the general economic outlook and the broad trend has been one of growing confidence in regard to Irish economic prospects. While sentiment towards household finances has also been improving through this period, until January it remained the case that more consumers expected their own financial circumstances to worsen rather than improve. 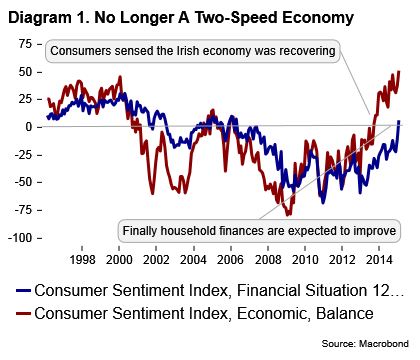 The January survey is the first time since May 2007 that, on balance, Irish consumers expect an improvement in their household finances in the year ahead. It should be noted that the gap between positive and negative responses is fairly modest-30% of consumers now think their household finances will improve compared to the 24% that expect a deterioration. We also see some risk that consumers could be more cautious in February when Christmas- related bills arrive and continuing constraints on spending power are emphasised. However, the January sentiment survey results hint that Irish consumers now think that they will see tangible benefits of the economic upswing in the year ahead.

Spending Power Will Be Helped By Several Factors

A number of factors may be contributing to changes in consumer sentiment in relation to their personal financial prospects. After six years that saw persistent increases in the fiscal burden of households, the concessions on taxation and benefits announced in Budget 2015 could now be helping sentiment. We also think Irish consumers continue to be influenced by developments in the property market and a stronger trend in house prices may be prompting a positive ‘wealth effect’ that is boosting confidence.

Another consideration could be a number of early 2015 surveys that suggested pay gains might become more commonplace in the coming year. Coupled with the prospect of low or even negative inflation, this may be encouraging greater optimism in regard to purchasing power. Lower oil prices could have played a significant role in altering consumer thinking in relation to the outlook for household finances in January in part because there was a considerable media focus on this issue through the survey period.
A rough estimate suggests lower oil prices could boost Irish household spending power directly by just over 1% in the year ahead. It should be emphasised that for most consumers this impact will be felt incrementally rather than as a sudden windfall and we also think that cash strained consumers are likely to respond to increases and falls in oil prices somewhat differently. These considerations mean the potential contribution of lower oil prices to a healthier 2015 for Irish consumers might still be underestimated but our sense is that sharp falls in oil prices had a material impact on the improvement in sentiment last month.

Although the change in sentiment in relation to personal finances made the largest contribution to the rise in consumer sentiment in January, there was also a marked improvement in thinking on the prospects for the Irish economy in the coming year. This element of the survey posted its strongest reading since February 2006, with 63% of consumers expecting the Irish economy to strengthen in 2015 and just 11% envisaging a deterioration. These results likely reflect a wide range of upbeat commentaries and forecasts over the turn of the year as well as a sequence of strong economic data.

Irish consumers were also more optimistic about the outlook for the jobs market last month. With several new job announcements and positive end of year statements from the IDA and Enterprise Ireland this result is scarcely surprising. If anything, the increase in this area of the survey- which was marginal, may have been a little less than expected. This might be explained by continuing news of job losses such as those envisaged at Bewleys as well as a sense that the improvement in employment opportunities may not have percolated through to all regions or skill-sets.

Overall, we think the jump in Irish consumer sentiment in January is hugely encouraging in terms of its implications for economic growth in 2015. There is some risk of at least a partial correction in the sentiment index in coming months but unless consumers have miscalculated badly, the survey points towards a stronger trajectory in household spending in the months ahead.