Irish consumer sentiment continued to improve at the start of 2014

• Sentiment Index At Best Level Since May 2007

Irish consumer sentiment continued to improve at the start of 2014. A stronger buying climate was responsible for much of the monthly gain as consumers took advantage of Christmas sales. We estimate this element accounts for about 70 per cent of the rise in the index between December and January. It also seems that confidence in the economic outlook is continuing to build and fears about household finances are easing somewhat. So, the broad trend in sentiment remains positive.

The KBC Bank/ESRI Consumer Sentiment Index rose to 84.6 in January from 79.8 in December, taking the index to its highest level since May 2007. As diagram 1 below indicates, the index is now in line with the historic average of the eighteen year series of 85.1. Of course, this timeframe saw a number of distinct periods that produced widely varying conditions in the Irish economy and correspondingly large swings in the financial well-being of its consumers. As a result it is difficult to interpret what the average value over the entire period might mean. 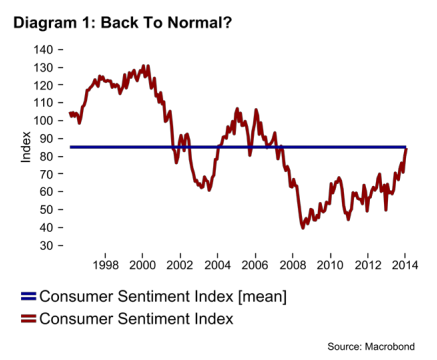 We think that it would not be correct to suggest that conditions for Irish consumers are now back to ‘normal’. Instead, we would argue that the trend in sentiment data through the past year is consistent with a sense that Irish consumers are gradually recovering from the extreme difficulties of recent years. Painful legacies of the crisis mean that this is likely to be a lengthy and ‘choppy’ process rather than a smooth pick-up in sentiment.

The increase in Irish consumer sentiment in January mirrored gains in similar indicators for the US, the Euro area and the UK. A sense that Irish Consumers Start 2014 In Upbeat Mood3 February 2014 3 most western economies are clearly past the worst may be an important factor in the shared improvement in the mood of consumers last month. The usual array of upbeat forecasts and commentaries that tend to emerge at the beginning of each year probably gave an additonal boost to confidence.

The details of the Irish consumer sentiment survey show mixed results for January, with three of the five elements improving from December, one effectively unchanged and one somewhat weaker. The particular combination of responses in the January survey makes it hard to identify any strong pattern that might suggest a notable change in consumer thinking in the past month. Overall, we think that these results imply the persistence of a clear if somewhat uneven increase in confidence of late.

Consumer thinking on Irish economic prospects held broadly steady in January at the notably improved levels reported in recent months. As was the case in the December survey, just over half of those questioned feel the Irish economy will improve in the coming year. This confirms a marked change in thinking of late compared with the concerns expressed consistently through recent years.

On average, through the period 2008-2013, the survey found that just one in five consumers expected the Irish economy would improve in the following twelve months. A clear and consistent majority of negative responses to this question signalled entrenched concerns about the future of the Irish economy prospects. So, it is encouraging that the January survey suggests that a more positive view is taking hold. That said, strong evidence of a more broadly based change in Irish economic conditions may be required to drive this element materially higher in the months ahead.

While views on the general economic outlook changed little in January relative to the strong December reading, there was a further improvement in thinking on the jobs market last month. This may owe something to positive end-2013 statements from the IDA and Enterprise Ireland that highlighted job gains as well as the continuing drop in numbers on the live register. As a result, the balance between positive and negative replies to this question was the best since December 2000. This clearly points to emerging optimism on the outlook for the Irish jobs market. However, rather than signalling a particularly exuberant view of the jobs market at this point, we think the responses to these questions primarily indicate how consistently concerned Irish consumers have been about the outlook for employment through the past decade.

If responses to the two ‘macro’ questions in the January survey present a generally consistent picture of consumer thinking, answers to ‘micro’ questions are a little harder to interpret. Views in relation to the trend in household finances over the past twelve months worsened modestly Irish Consumers Start 2014 In Upbeat Mood3 February 2014 4 implying a clear awareness of continuing pressures on spending power. In contrast, expectations for family finances over the next twelve months improved marginally.

The responses to these two questions are not necessarily contradictory as they may suggest consumers believe a turning point in their spending power may be emerging. That would be consistent with a rather limited immediate impact from stronger jobs and property markets on most households’ incomes and wealth at present. Moreover, both of these answers signal only minor changes in thinking of late. It could be argued that consumers are sensing some positive developments that may eventually impact on their personal finances but the persistence of clear negative balances argue that worries about spending power continue to dominate thinking on this issue.

Given the generally cautious tone of responses to questions on household finances, the scale of the improvement in the buying climate in the January survey is slightly surprising. Clearly, there is a powerful seasonal aspect to this question that typically results in sharp movements around the time of summer and, in particular, winter sales. However, the monthly gain in this element of the survey between December and January was somewhat greater than usual. In the context of improving views about the general economic outlook, it is not altogether surprising that there would be some increased inclination to take advantage of aggressive price discounting by retailers responding to lacklustre pre-Christmas spending.

While we expect an improving job market to support a solid increase in consumer spending in the coming year, we think the step-up in spending plans signalled in the January sentiment survey may exaggerate the likely degree of growth in this area. If this view is correct, there could be a significant retracement of last month’s gains in the February survey. Indeed, such an outcome might be sufficient to prompt a hopefully temporary drop in the overall consumer sentiment index.