Irish consumer sentiment improved somewhat in January, recovering two thirds of the sharp fall seen in December.  The January reading suggests Irish consumers remain relatively gloomy about the outlook for the economy as a whole and their personal finances.  However, the more apocalyptic fears that prompted the sharp decline in sentiment in early December appear to have eased.  The key question now is what shape any surprises in economic news might take in the next couple of months.  It seems that Irish consumers are braced for another fairly difficult year in terms of further downward pressure on their living standards.  In such circumstances, it is likely that news on the ‘macro’ environment will determine whether consumers feel the Irish economy can show a sufficient improvement to make the current austerity programme sustainable.

The KBC Bank Ireland/ESRI Consumer Sentiment Index rose to 56.6 in January from 49.2 in December.  This 7.4 point gain clawed back two thirds of the 10.9 point drop seen between November and December.  There has been considerably more volatility in the sentiment survey of late than is normally the case.  This is evident from Diagram 1 below which compares the monthly data with the underlying trend emerging from 3 and 6 month moving average measures.  Greater swings in sentiment of late probably reflect what is a particularly uncertain economic environment.  By focussing on the moving average measures shown in Diagram 1 we can look through the recent volatility in the monthly data.  This suggests there has been some weakening in sentiment in the past few months following a tentative improvement through last Spring/Summer.  As a result, the January 2012 reading of 56.6 is very similar to last years average of 55.8 but it remains significantly below the long term average of the sentiment survey which stands at 87.6. 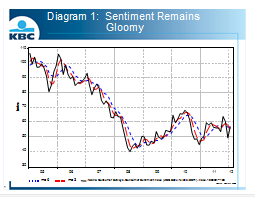 Confidence picked up in many countries in January

The modest improvement in Irish consumer sentiment in January coincided with more positive readings in a range of similar indicators for other countries.  The University of Michigan measure of Consumer Sentiment in the US rose to its strongest level in eleven months while Eurozone consumer confidence posted its first monthly gain since May 2011.  Similarly, the GFK measure of UK consumer confidence rose to its highest levels since June of last year.  These results suggest that the intense build-up in nervousness worldwide that was centred on the Euro crisis may have peaked in early December and eased somewhat in the interim.  At a technical level, the actions taken by the ECB in early December seem to have played an important role in stabilising financing conditions in the Euro area.  However, from the perspective of the hard pressed consumer, what probably matters more is that the imminent economic Armageddon widely predicted through November and December failed to materialise.  Indeed, it could also be the case that the temporary disappearance of economic news from TV screens and newspaper front pages over Christmas (a ‘sanity clause’?) may have helped reshape the perspectives of the average consumer on the scale of current economic difficulties.  This is not to understate the extent of economic and financial pain being faced by consumers in Ireland and elsewhere.  However, a temporary Christmas media ‘truce’ may have helped ease some of the more feverish concerns evident in the December Irish sentiment reading.

Irish consumers still gloomy but less terrified than in December

The improvement in Irish consumer sentiment in January should be regarded as both modest and tentative.  At current levels, Irish consumers are fairly downbeat about their own financial prospects and those of the broader Irish economy.  It is widely recognised that 2012 will be a very difficult year.  In this context, more than half of those surveyed in January expect their personal finances to worsen, roughly five times as many as expect an improvement.  Similarly, two thirds of Irish consumers think that the Irish economy will weaken this year.  Again, this is roughly five times as many as anticipate an upturn.  That said, in both instances these results were better than those reported in December.  Indeed, responses to all five of the main sentiment survey questions were less negative than in December.

widely publicised worries that affected Irish consumers in December related to the threatened break up of the Eurozone.  However, we suggested in last month’s commentary that concerns relating to the impact of Budget 2012 may also have played a key role in the particularly weak survey reading last month.  About two thirds of the December responses were taken before Budget 2012 was presented on the 6th of last month.  In the run-up to Budget 2012 as well as in its immediate aftermath there was intense speculation on the many ways through which Budget measures would reduce spending power not just in 2012 but also for at least the following three years.  These worries undoubtedly helped shape the very poor sentiment reading for December.

Viewed from this perspective, the January results hint at a tentative easing in budget related worries that probably reflects the disappearance of some of the wilder concerns about the likely impact of actual and potential budget measures.  The fact that the biggest improvement between the two months survey results was seen in the outlook for household finances seems to support this view.  The gain in this element of the survey could also owe something to the likelihood that the interest rate climate for 2012 shouldn’t be threatening and could even see a further drop in borrowing costs.

While consumers remain fairly gloomy about their personal financial prospects for the year ahead, there was a clear improvement in this area of the survey in January.  Thinking on the broad Irish economic outlook and the prospects for jobs also improved in the January survey but to a relatively limited extent.  Again, this highlights the deeply entrenched the view among consumers that the coming year will be very difficult in terms of activity and employment in Ireland.

The January sentiment survey was also boosted by the usual seasonal improvement in the buying climate that typically reflects the impact of sharp price discounting in post-Christmas sales.  The change in this aspect of the survey between December and January was broadly similar to that recorded a year ago but somewhat below the average seasonal bounce recorded in the sixteen year history of the survey.  This hints that nervous and cash-constrained consumers have been more careful in their spending in post-Christmas sales this year.

The normal January bounce in the buying climate accounted for a little over a third of the improvement recorded in the overall sentiment Index in January.  The likelihood is that we will see some reversal in this element in February and, perhaps, some broader retrenchment as post-Christmas bills arrive.  In these circumstances, there may be some risk of a renewed weakening in Irish consumer sentiment in February.

The key unknown is whether consumers are influenced more by developments such as the recent positive review of the Irish economy by the Troika or by their assessment of the toll that the ongoing adjustment is taking on the economy in general and their pockets in particular.  The January survey results suggest that sentiment remains very fragile but Irish consumers seem to have discounted quite a lot of bad news in terms of what 2012 may hold.  Unfortunately, in extremely uncertain times, it is almost impossible to say whether the emerging economic news will prove better or worse than what seem to be fairly downbeat expectations among Irish consumers.