Irish consumer sentiment improved slightly in March, largely because of a slight easing of concerns about household finances. However, if the survey hints at a fading ‘feelbad’ factor, there is little evidence that markedly more positive sentiment is becoming established.  Instead, a still uncertain economic outlook means consumers remain relatively cautious and this was reflected in a marginal weakening of spending intentions.

The considerable difficulty that the average Irish consumer is currently having in evaluating their economic and financial prospects is clearly suggested by the fact that the March reading marks the 11th time out of the past 12 months in which the sentiment index has moved in the opposite direction to the previous month.

The KBC Bank Ireland/ESRI consumer index increased to 101.9 in March from 100.7 in February, only partly recovering the 2.4 point drop reported a month ago. Encouragingly, the three month moving average picked up for a third consecutive month and, as diagram 1 indicates, this measure of the underlying trend has now reversed the clear weakening seen through the second half of 2016. 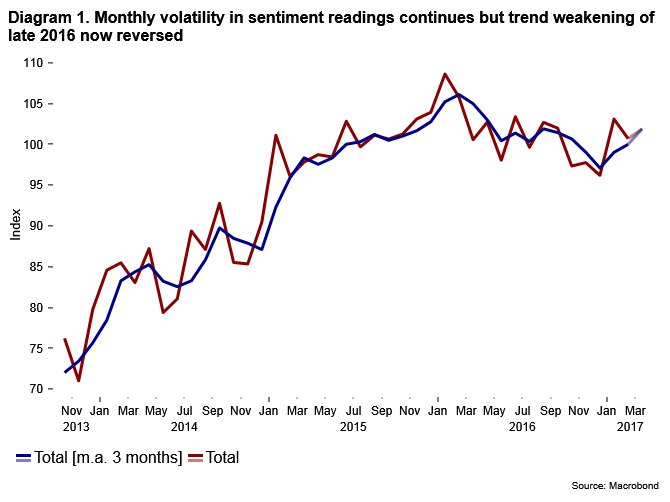 The improvement in Irish consumer sentiment in March mirrored stronger readings in comparable US indicators of late but was at odds with the first weakening in Euro area sentiment in six months. We think the latter may reflect a combination of increased nervousness ahead of looming elections in a number of countries, renewed concerns about Greek debt prospects and ongoing worries about Italian economic and financial frailties. These ‘event risks’ appear to have more than offset some encouraging economic signs. In contrast, a drop in March suggests that weakening purchasing power on foot of higher inflation in the UK seems to be taking a toll on UK consumer confidence which sustained the weaker trend in place since last autumn.

The divergent trends in global sentiment indicators in March contrasted with more uniform readings in February. This highlights the variable degrees of influence that domestic and global factors are having in framing consumers’ views of the economic and financial outlook both in Ireland and elsewhere at present.
In the absence of major domestic developments in the next couple of months, we think the major influence on Irish consumer sentiment could be the tone of initial Brexit negotiations and the extent to which a conciliatory or hostile note eases or amplifies concerns about the consequences for the Irish economy.

Three of the five components of the Irish consumer sentiment survey posted stronger readings in March than in February. Of these, the most notable related to the trend in household financial circumstances in the past year. This element of the survey has been quite choppy through the past year as consumers struggled to assess the relative importance that they should to attach to contrasting movements in many areas of their personal finances. For example, generally low inflation had to be set against large increases in high profile areas such as insurance and housing costs while an improving employment picture offered only limited comfort in the face of generally subdued wage trends.

As we noted previously these contrasts have contributed to an Irish consumer who is very uncertain about the ability of an improving Irish economy to deliver a significant increase in their living standards but, because of the experience of the recent crisis, is painfully aware that poorer ‘macro’ circumstances translate into substantial pressures on household finances. As a result, a consistent message of the sentiment survey in recent years has been that, from the perspective of the average consumer, Ireland’s economic recovery is more properly characterised as an easing in pain than an increase in prosperity.

This is clearly illustrated by diagram 2 which shows that the proportion of consumers who feel their households’ financial circumstances have improved in the past twelve months has increased relatively little of late. More significantly, the number of consumers reporting a worsening of their personal finances has fallen sharply through the economic upswing and having fluctuated through most of 2016, the March survey results show a further drop to the lowest level in sixteen years. So, the broad message is that while Irish consumers don’t see their economic glass as particularly full at present, it seems notably less empty than it was for most of the past ten years. 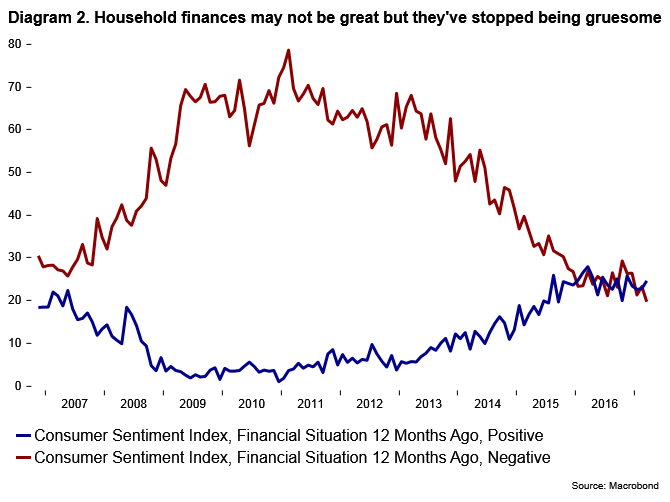 A similar but smaller improvement was also seen in consumers’ expectations for their household finances in the coming twelve months. However, the March survey also saw a modest pull-back in spending intentions. The weakening in the buying climate reflects a continuing caution that is undoubtedly informed by an uncertain economic outlook.

It should also be noted that the nature of the improvement in household finances describe above implies that three quarters of consumers did feel their personal finances had gotten stronger in the past year. So, the spending power of many Irish households remains quite limited. As a result, it is not at all surprising that many retailers continue to find the much heralded pick-up in domestic spending relatively underwhelming.

Consumers’ assessments of the broad outlook for the Irish economy were modestly stronger in March than in February but the gains entirely reflected an easing in negative views. We would caution that this result could be reversed by some aggressive posturing in the early weeks of the Brexit negotiations. Perhaps surprisingly, consumers were a little less confident about the outlook for jobs in March. We think this could have been influenced by high profile layoffs with the closure of the Coty plant in Nenagh as well as notable concerns about industrial disputes in some public sector areas.

It should be emphasised that at current levels, the sentiment survey is consistent with ongoing growth in Irish consumer spending but the March results emphasise both limits to the improvement in household incomes and continuing caution about major uncertainties in the economic outlook.