Sentiment bounces back in February after January slide

…So, permanent scarring a bigger issue than pent-up demand for Irish economic outlook

Irish consumer sentiment improved in February on stronger expectations for activity and employment in the coming year as vaccine hopes, slowing virus numbers and positive economic data and forecasts combined to encourage some sense of post pandemic possibilities.

The KBC Bank Ireland consumer sentiment index increased to 70.8 in February from 64.9 in January, a 5.9 point gain that reversed more than half of the 9.7 point drop seen between December and January that followed an unexpectedly sharp rise in the incidence of the Coronavirus and a related ramping-up of health related restrictions on economic activity.

This up and down pattern in monthly Irish consumer sentiment readings has been evident since June of last year, with monthly changes in the index only moving successively in the same direction on one occasion during this period. These choppy movements in the index highlight the difficulties Irish consumers face in making sense of their current circumstances and future prospects in rapidly changing health and economic circumstances.

If the improvement in sentiment in February suggests Irish consumers are seeing some encouraging signs, they remain understandably cautious. The current level of the sentiment index still falls significantly short of the now twenty five year average of the series which stands at 86.9. As such, it is indicative of a nervous Irish consumer, a judgement further supported by more negative than positive responses to each of the survey’s five key questions.

The most notable month-on-month improvement in the February survey came in the ‘macro’ aspects that focus on the general outlook for the Irish economy and the prospects for jobs. By some distance, the largest gains came in thinking on the general economic outlook. While the majority of consumers still fear a weaker Irish economy, the share expecting a stronger one increased from one in fourteen in January to one in six in February.  Our sense is that these gains reflect positive recent developments in both health and economic spheres.

Recent weeks have seen a marked if far from complete reduction in the daily incidence of Covid-19 cases in Ireland. In addition, notwithstanding current roll-out difficulties, expectations for a marked step-up in the pace of vaccinations have increased.

The survey period also saw a number of very positive forecasts for the Irish economy which, together with notably smaller than feared outcomes for activity and the public finances in 2020, hint that the lasting economic and financial fallout may be less problematic than initially envisaged.

In a similar vein, recent data showing resilience in property prices and a sharp pick-up in new building and house purchases of late may have provided some comfort that this crisis was not following a familiar and frightening playbook.

The February sentiment survey also saw a significant improvement in thinking on the outlook for jobs. While negative responses continue to outnumber positive responses, the gap narrowed materially to produce the best reading for this element of the survey since February 2020.

In circumstances where health restrictions mean substantial numbers are currently not working, this result likely owes much to expectations of a sharply changed health landscape as the year progresses. Another important driver may be the large number and diverse sectoral and regional character of a wide range of job announcements made during the survey period.

Irish consumers were also less pessimistic about the outlook for their personal finances in February than in January. However, the change in thinking was far less marked than in relation to broader economic conditions. In part, this may be because for many consumers the roll-out of vaccinations may have only limited immediate implications for their own financial circumstances.

In turn, this meant spending plans improved marginally. While this may suggest households will spend somewhat more freely as the year progresses, there is little in this result to suggest Irish consumer spending will be released ‘like a coiled spring’ as Bank of England chief economist, Andy Haldane, recently suggested might happen in the UK.

Arguably the most surprising aspect of the February results was a slightly weaker assessment of consumers’ financial circumstances through the past year. To some extent, this result may simply reflect many consumers' assessments of the derailment by the pandemic of many of the normal elements of life progress they would have previously have taken for granted.

More basically, concerns about household finances also likely capture a sense on the part of significant numbers of households that they are spending materially more on grocery bills and utilities than previously. For some of those most directly affected by restrictions on activity, media focus during the survey period on the potential tax implications of pandemic payments may also have weighed on views in relation to personal finances.

Again, these results may caution against expectations of an unprecedented consumer boom later in 2021. Although we  expect a material increase in spending, some significant portion of the sharp increase in savings through the past year is likely to remain as a protection against future rainy days.

One important consideration in terms of the likely rundown of surplus savings is the expected extent and duration of fallout from the pandemic. We asked a couple of supplementary questions on this topic in the February sentiment questionnaire. Some 12% of those surveyed in February say that Covid-19 has had a positive impact on their financial circumstances while some 51% say the impact has been negative and 37% say their finances have not been impacted by the pandemic. 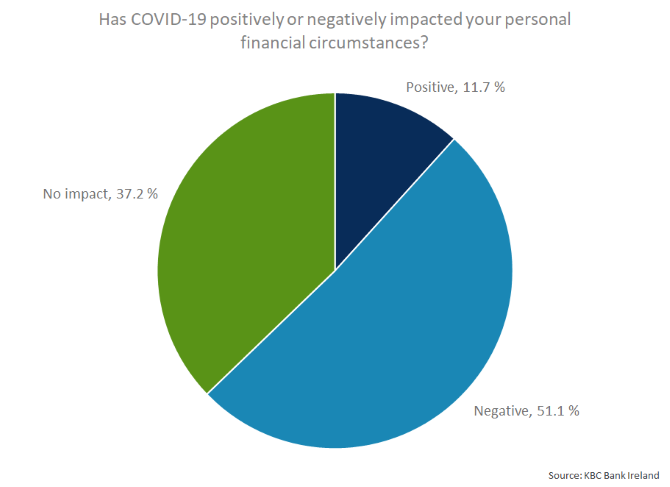 In circumstances where aggregate household income appears to have grown materially in 2020 and household deposits increased markedly, the negative balance in these responses likely reflect both the uneven distribution of pandemic impacts across the economy at large as well as subjective assessments of income losses and additional spending commitments and perhaps even opportunities foregone.  To the extent that these results speak of broadly based concerns, they hint at a measure of restraint in the release of pandemic savings by Irish consumers through the course of 2021.

Another factor likely to influence the release of recently built savings is the expected duration of pandemic fallout on household finances. A second supplementary question asked how long effects might persist. Responses were broadly similar for those reporting positive and negative effects although overall positive effects were seen dissipating somewhat faster.

The chart below suggests only 18% of those reporting negative effects on their household finances expect those impacts to end within six months, with a further 27% expecting an improvement to emerge only in the second half of the year.  The most common expectation, expressed by 30% of these respondents is that  negative impacts will take one to two years to end. A substantial further 10% see difficulties persisting for three to five years with a small but non-negligible 5% of the view that the damage to their financial circumstances will be permanent. 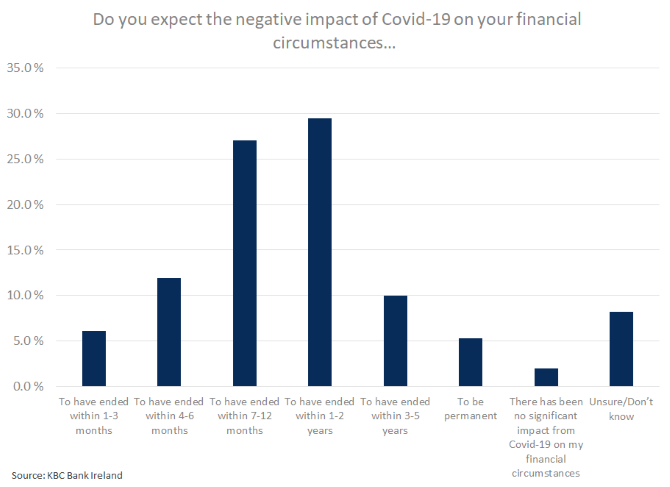 These responses hint that for the Irish economy the problem of permanent ‘scarring’ from the crisis seems set to be a more important issue than the possibility of pent-up demand boosting spending sharply in 2021. Of course, it could be that Irish consumers are significantly underestimating the potential for a sharp and sustained economic recovery and current concerns prove misplaced.

It may also be that consumers are incorrectly assessing emerging risks through the prism of the severe difficulties endured in the previous downturn.However, financial and psychological ‘scarring’ from the downturn of a decade ago remains a notable feature of Irish economic landscape today and avoiding it being overlaid with a different but potentially more dangerous dislocation resulting from the pandemic would seem a forceful argument in favour of the persistence of supportive fiscal policy settings that ease the concerns evident in the special questions in the February consumer sentiment survey.