Irish Consumers Increasingly Nervous In May

Irish consumer sentiment weakened in May, the third monthly decline in the past four months. The May sentiment results seem to reflect a reassessment of both the likely trajectory of the Irish economy and the impact of the economy on household finances.

For most of the past couple of years, the Irish economy consistently delivered positive surprises that boosted consumer sentiment both directly through the implications for the ‘macro’ climate relevant to consumers and indirectly by holding out the prospect of a material improvement in household finances.
Increased uncertainty at home and abroad of late now emphasises downside risks to the recovery. In the May survey such concerns were notably amplified by some adverse developments in the Irish jobs market. Together with a sense that the Irish economic upswing has under-delivered in terms of a favourable impact on household finances, the May survey appears to be highlighting a range of emerging concerns that now seem to be weighing on the mood of the average consumer. This recent change in trend is clearly evident in the diagram below. 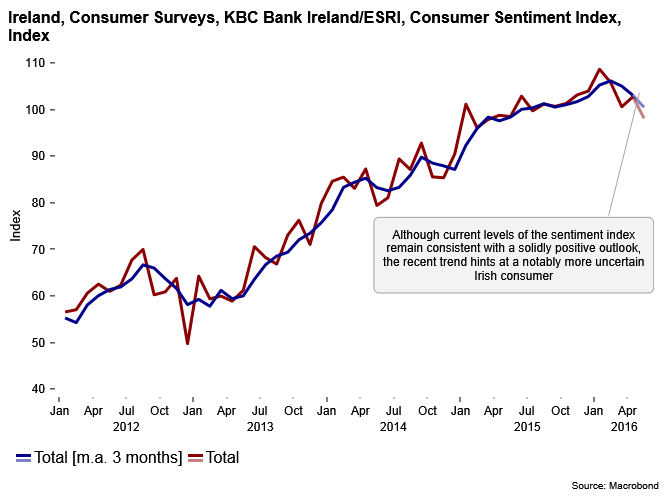 While the trend in sentiment in recent months clearly points towards greater nervousness of late, it doesn’t signal any dramatic deterioration in the current circumstances of the typical Irish household.  The level of the sentiment index remains above its historic average (of 86.3) and the detailed responses in May suggest Irish consumers remain broadly positive if a little less exuberant in their views of Irish economic prospects. However this month’s results show households remain divided and comparatively downbeat in their assessments of their personal financial circumstances.

The KBC Bank/ESRI consumer sentiment index fell to 98.1 in May from 102.7 in April. Although the monthly change is not dramatic, it does mean the May reading is the weakest since March 2015. The three month moving average of the sentiment index, which serves as a measure of the recent trend declined for the third month in a row in May. So, recent sentiment readings clearly point to some weakening - even if reasonably modest in degree - in Irish consumer confidence of late.

It seems that the poorer Irish consumer sentiment reading in May largely reflects domestic considerations. The closest corresponding US measure, produced by the University of Michigan, showed a sharp improvement in May from a weak trend of late. Similarly, euro area consumer confidence rose a good deal more than expected and their UK counterparts also reported slightly better confidence readings in May notwithstanding a fairly alarmist tone to much of the debate around the upcoming ‘Brexit’ referendum.

The decline in Irish consumer sentiment in May was broadly based with all five components of the index posting lower readings than in April. Somewhat unusually, the two ‘macro’ elements of the survey posted the largest and smallest declines. Consumers had already downgraded their assessment of the twelve month outlook for the Irish economy sharply in March. So, it is not entirely surprising that the May survey saw only a relatively small further decline in this part of the survey.

Consumer thinking on Irish economic prospects remains positive. Some 49% of respondents to the May survey expect the Irish economy to strengthen in the next twelve months compared to 17% who envisage a weaker economy. This positive balance is the strongest across the five main questions in the survey. However, there has been a notable scaling back of the degree of optimism in relation to the Irish economic outlook in recent months. The May ratio of roughly three positive responses to every one negative reply compares to a near six to one ratio in the January survey when 62% of consumers anticipated a stronger Irish economy against 13% who expected weaker conditions.

The relatively small downgrading of economic prospects in the May survey contrasted with a marked weakening of sentiment in relation to jobs which saw that element of the survey post its weakest reading in two years. Again, it should be noted that positive responses outnumber negative responses by almost two to one (42% against 22%) in the May survey. So, there is still a fairly solid view that Ireland’s jobs market should continue to improve in the coming year but confidence seems to have taken something of a knock in the latest survey period.

The May sentiment survey was taken in the first two weeks of the month. So, respondents would not have been aware of the strong jobs data for the first quarter reported by the Central Statistics Office last week. However, the survey period did see the release of monthly unemployment figures for April showing a continuing decline in joblessness as well as quite a number of new job announcements. These trends might have been expected to underpin consumers’ strong expectations for the Irish jobs market. However, we think a couple of high profile developments gave rise to some concerns in relation to the health of the Irish jobs market.

In late April it was reported that up to 400 jobs could be lost at Intel’s Irish operations as part of a global restructuring programme by that company. The prospective loss of a large number of jobs at this high profile employer is likely to have focussed attention on the increased fragility of employment even in relatively successful sectors of the Irish economy. We previously noted that consumer sentiment is likely to respond more forcefully to news of significant job losses than to similar scale new job announcements because the threat from the former resonates more strongly with the average consumer than any opportunity presented by the latter.

The May survey period also saw indications of a more general problems in the Irish labour market in the shape of high profile industrial relations disputes at the Luas and Tesco.  As the recovery in the Irish economy progresses and unemployment falls, the implications for pay looks set to be a challenging issue and recent difficulties in this regard may have weighed on consumers’ assessments of the health of the Irish jobs market at present.

While the jobs component posted the largest monthly drop in the May sentiment survey, all three elements relating to households’ financial circumstances also showed clear declines from their April levels. These changes brought the two components related to households’ assessment of their purchasing power back to levels last seen in autumn 2015 while consumers scaled back their spending plans as indicated by their sense of whether it is now a good time to make major purchases to levels last seen sixteen months ago.

We are not aware of any specific development during the survey period that would explain why consumers’ views on their family finances would have changed materially. The detailed results suggest roughly one quarter of households see a positive trend in their household finances and a broadly similar number report a continuing negative trend. So, relatively few consumers are signalling an improvement in living standards. This leaves them poorly positioned and correspondingly sensitive to renewed downside risks to the Irish economy. Our best guess is that increased uncertainty of late in relation to the general economic outlook coupled with a sense that Ireland’s economic recovery has not improved the financial circumstances of many households as much as they might have expected prompted a generalised scaling back of views on personal finances. This ‘precautionary’ adjustment in thinking would be consistent with the broadly similar scale of change seen across the three elements of the survey related to household finances in May. As with the broader May sentiment reading, it hints at a notably more nervous Irish consumer of late.